[tps_header]Fashion Week has ended which means that we can all officially relax! Socially Superlative takes a look back at the lounges that helped us take a break in between the shows, special events, and madness![/tps_header] 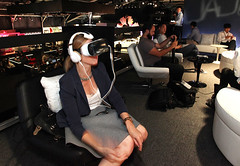 As always, Samsung hosted the ultimate Fashion Week lounge right inside the tents of Lincoln Center. The company debuted its soon to be released prototype of their virtual reality headset, Gear VR, which launches later this fall with the Note 4 smartphone. Samsung showed that technology can be fashionable with their genius partnership with Sawrovski.

I can’t even begin to describe how amazing the Samsung Gear VR device is. You take your phone, slip it into the holder, throw on your headphones, and while you are sitting in bed you can travel the world in a helicopter, stand on stage at a Coldplay concert, or sit in an IMAX theater alone while watching any movie of your choice! It is powered by Oculus so the graphics are AMAZING!

For Mercedes-Benz Fashion Week, they definitely raised the bar. And of course celebrity guests turned out to preview the new technology as well including Nicky Hilton, Zac Posen, Sophia Bush, Louise Roe, Actress Laverne Cox of Orange is the New Black, Estelle, and more.