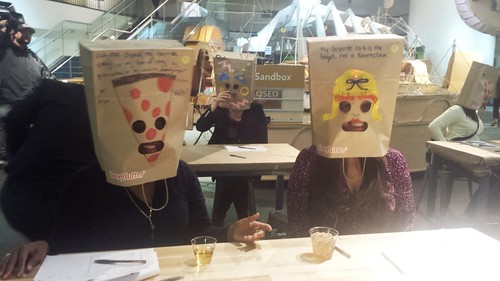 LoveFlutter, a London-based dating app, is pushing its #SayNoToShallow campaign through this whole “paper bag over the head while speed dating” to emphasize personality over appearance. The app was created to meet “Quirky Dates” and you’re matched through interests along with the wit and charm of a 140-character statement that you provide. 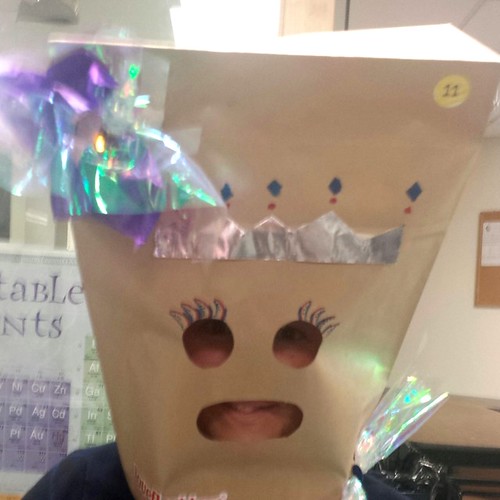 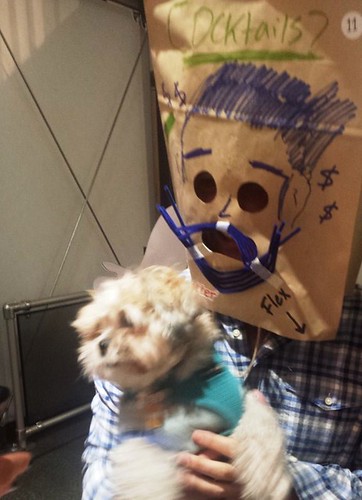 Now with this being a company from the U.K. they aren’t too familiar with New York, so this event was held in Corona, Queens at the New York Hall of Science – quite a trek in the cold.  None-the-less this museum was a sweet venue and backdrop and I’d totally recommend taking a family trip there! Luckily my windblown hair and chilled cheeks would be covered by the promised brown paper bag so I took the journey in stride.

Upon arrival the woman were ushered to one area of the museum while the prospective gentleman had their own quarters. I was handed a plain brown paper bag and given the task of decorating it with the craft supplies the LoveFlutter team provided. No pressure right! We needed to write an interesting fact about ourselves in 140 characters (of course I wrote four because I don’t follow directions well) and create a “mask” that represented us. 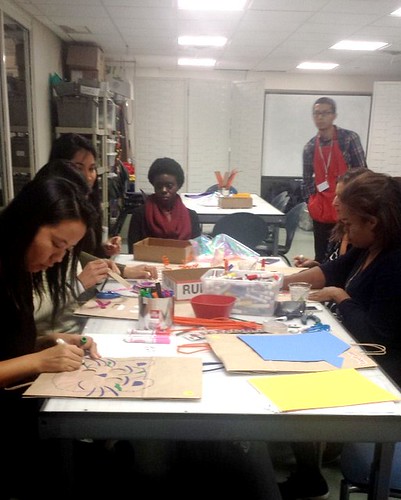 While crafting my masterpiece I got to know the other girls who were there as well to discover what this new dating stunt was all about. During craft time we were shown a brief documentary about the science and psyche behind LoveFlutter and the act of dating where personality is at the forefront, not initial physical attraction. Dr. Tomas Chamorro-Premuzic, Loveflutter’s relationship psychologist has been working with the program for over a year now and has been studying mobile and online dating for a number of years.

He shared “Although there are a number of successful sites, most of these sites were very basic and they try to replicate an encounter between two people that came close to representing two drunken people at a bar – so it comes off very superficial. The factors that predict likability in first few minutes, or even first few hours are very poor predictors of long-term compatibility.”

So with that nugget of knowledge, I placed the now decorated brown paper bag on my head and took my seat in the speed dating arena. The girls remained at each table while our suitors were tasked with moving around to try to woo us with witty banter and charming personalities, as we did the same. Let me say, it was strange in the beginning – especially when my first match brought his dog to try to win over the ladies (good move sir, good move.) He was certainly a match in my book and I checked him off as a “like” on my compatibility paper. You would only receive each other’s information via email after the event if you both checked like. 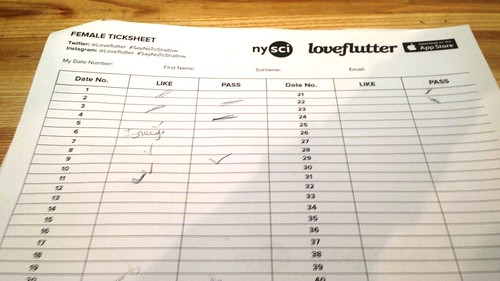 As the lightning fast “dates” continued I started to get used to the fact that I had a mask on my face and just focused on learning as much about the guys as I could. While there were no gents that particularly caught my attention, I did have some interesting takeaways from the experience. As humans, we still look for ways to interject physicality into dating – it’s normal. I could still see the guy’s body type, what they were wearing, and complexion – so that subconsciously factored into if I liked the person right off the bat. 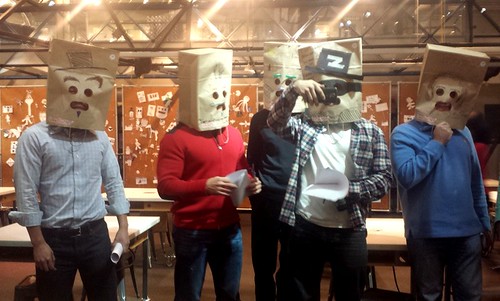 Yet, I still took the time to get to know the guys and was not as distracted by looks because faces were ultimately covered.  Overall the bags were good conversation starters, but there are certainly more effective ways to hide appearances – and it was kind of claustrophobic in the bag.

While the stunt was unique and drove home LoveFlutter’s #SayNoToShallow campaign, it will be interesting to see how the app fares and if shallowness is kept out of the mix! Perhaps I’ll have to download and try it out firsthand.