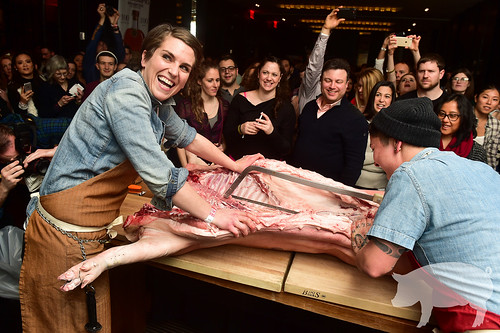 Cochon 555 kicked off the first stop of their competition on January 25th, 2015 at the Andaz 5th Avenue in what they like to call “New Porc City.”

Five top chefs from the culinary world were given a heritage pig a week in advance of the competition and were challenged to create innovative dishes that would make their talents stand out. Guests then voted to crown the Prince of Porc. The following is how the event played out. 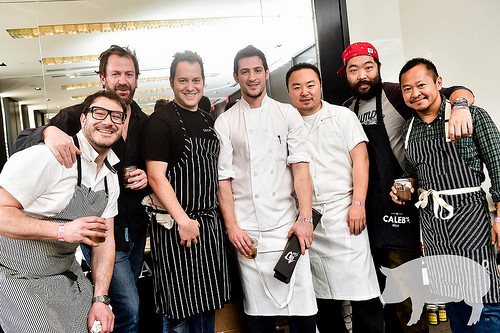 The event began with bacon strip snacks and Breckenridge Bourbon Whiskey punches as part of the Punch Kings competition and Smoking Goose bacon strips to snack on. 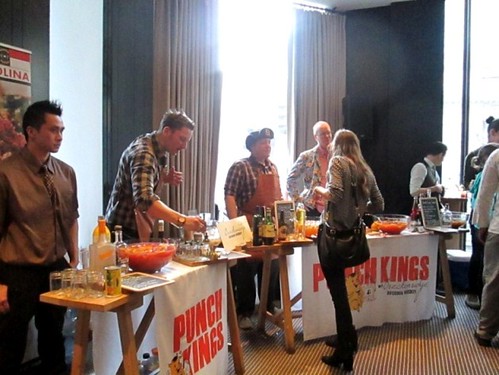 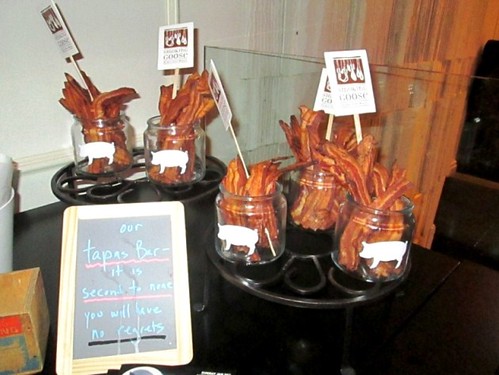 Down the hall from the main event, Beecher’s Handmade Cheeses, Creminelli Fine Meats and Caleb’s Kola among other vendors tried to distract you with main dish alternative, which were hard to resist! 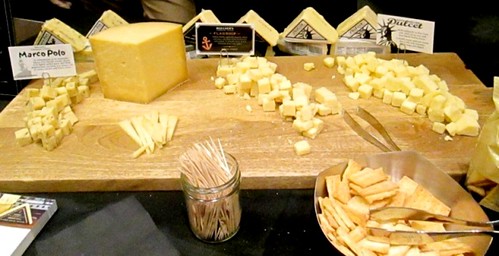 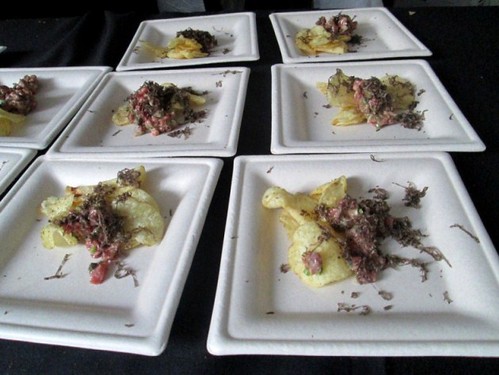 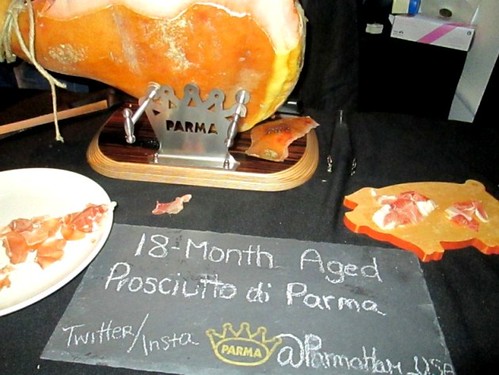 Andy Yang and Pichet Ong were at the first table, representing for Sachi Asian Bistro. Guests were initially given a choice of Lion’s Head, which was comprised of pork face in a great bone broth and a Trotter Fritter. When you visited the booth later on, you were treated to one of Pichet’s famous dessert dishes. Totally worth the wait.

Around the corner, Hooni Kim, from Danji/Hanjan was plating Spicy Gochujang Pork Belly on Brioche Buns. The pork was cooked perfectly and the bun was very fresh. Later on, Braised Shoulder Bossam Tacos with Fried Skin were served up, among other dishes. My favorite dish that Kim served up was the Roast Duck & BBQ Pork Fried Rice with Seared Foie Gras. The flavors definitely made the dish stand out. 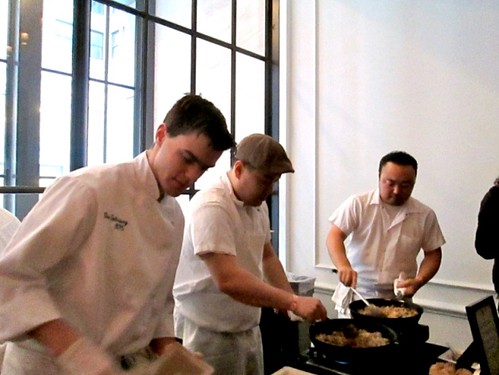 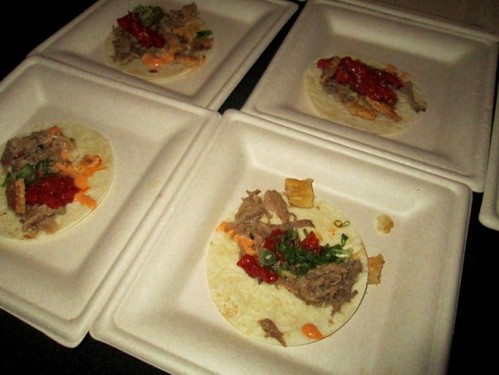 Francis Derby, of the Cannibal and Resto fame, took over a good portion of the middle of the venue. Fitting for Sunday brunch, they served up Bloody Mary’s with pig garnishes like mortadella and smoked pork loin. They also did a Cotechino McMuffin and their take on McDonalds Egg McMuffins, complete with yellow Cannibal wrappers. Their attention to detail did not go unnoticed. 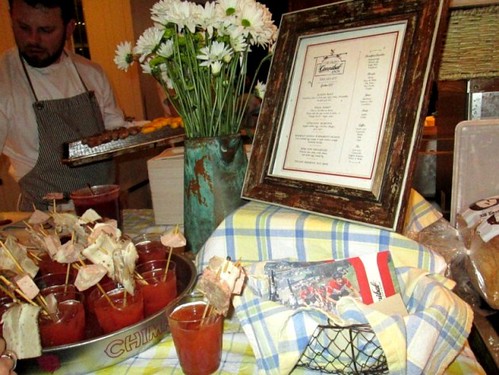 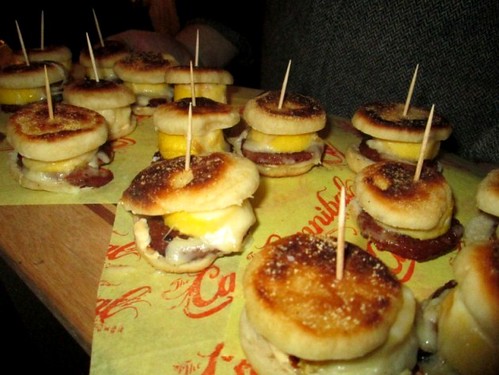 Representing for Andaz, Mike Santoro of the Shop and Andaz 5th Avenue, set up his station like a butcher shop where you were instructed to take a number before picking up a dish. Their “Best Bite,” Heirloom Corn Arepa, Wood Grilled Belly, Tomatillo, Piquillo Hot Sauce and Pickled Radish, was a great indicator of the creativity Santoro is capable of.

In the furthest room, Anthony Sasso was serving up Paella, which is most definitely what Casa Mono Y Jamon Bar is best known for. Their Pate en Croute and Morcilla looked like a petite dessert, even though the savory flavors were far from it. They also served an Apples and Ham Salad, which featured roasted wildflower honey ham, pig face torchon, watercress, apple, with blue cheese buttermilk dressing, celery flowers and chicharrones. A prime example of chefs thinking out of the box to create innovative food pairings. 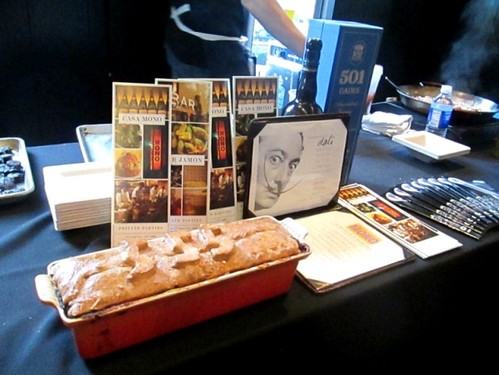 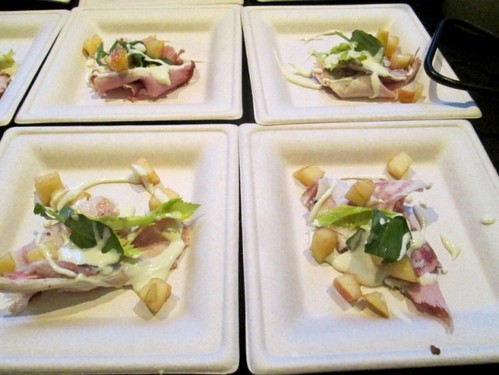 In that same room, Erika Nakamura from the Breslin was the butcher on site for the Pop-Up Butcher Shop, enlisting help from the Culinary Institute of America to run the shop, which the proceeds also benefited. Besides the winner unveiling, this portion of the event ends up drawing the biggest crowd every year.

Ultimately, Derby took home the winner title and will go on to compete against the winners from other cities in the Grand Cochon event on June 20th in Aspen, Colorado. 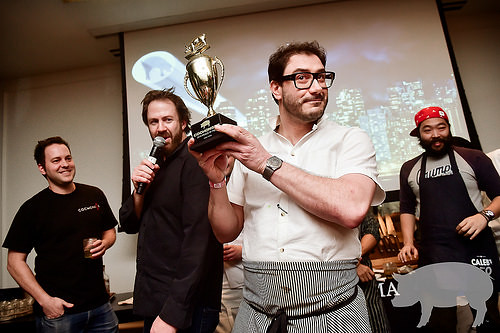 For more information on Cochon 555 and the competition in additional cities, please visit http://www.amusecochon.com/.