The Atlantic and the Aspen Institute’s New York Ideas 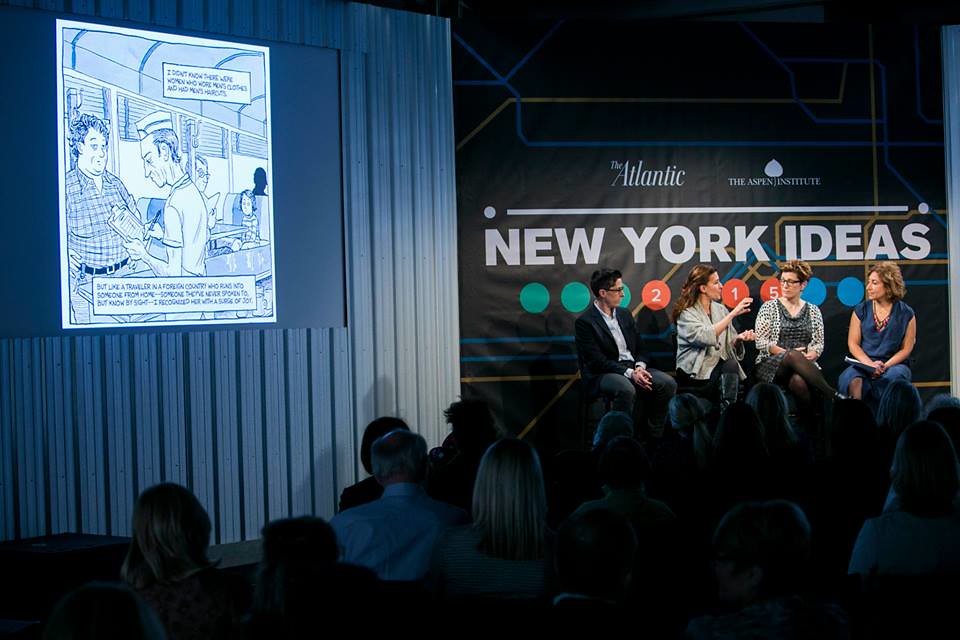 The Aspen Institute defines itself as “an educational and policy studies organization based in Washington, D.C. …

[whose] mission is to foster leadership based on enduring values and to provide a nonpartisan venue for dealing with critical issues.” 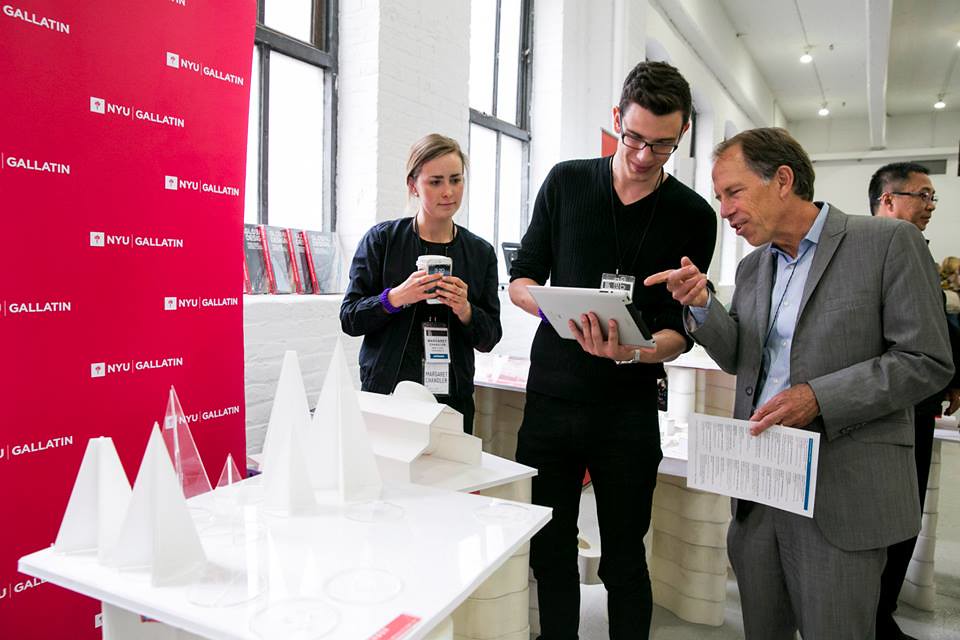 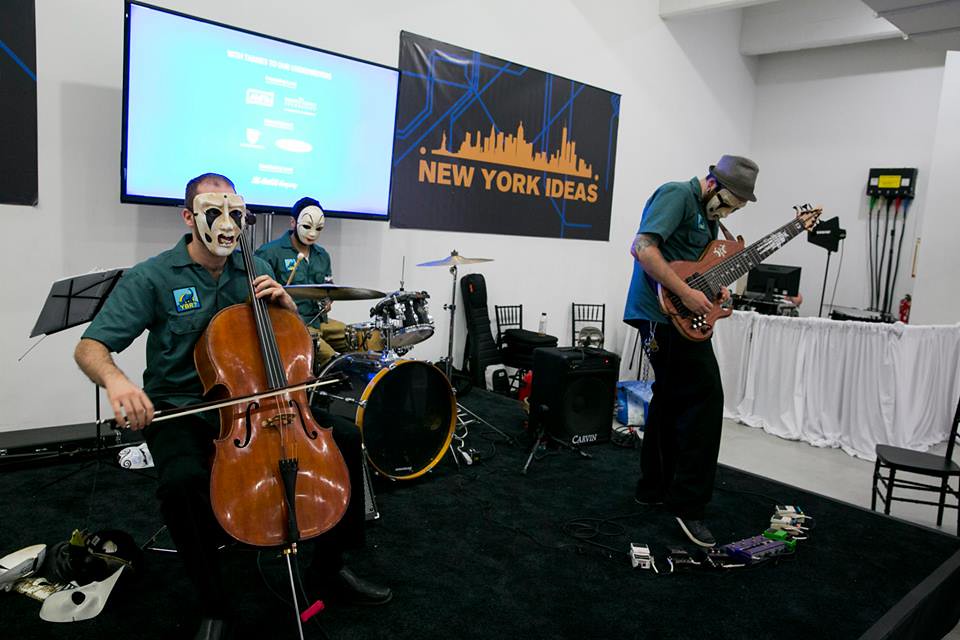 This mission was most certainly fulfilled at The Atlantic and the Aspen Institute’s “New York Ideas”, a day-long forum consisting of engaging New York centered innovators showcased in a rapid fire conversational format. As a conference junkie, I stayed for the entire day—and I was continuously on the edge of my seat. 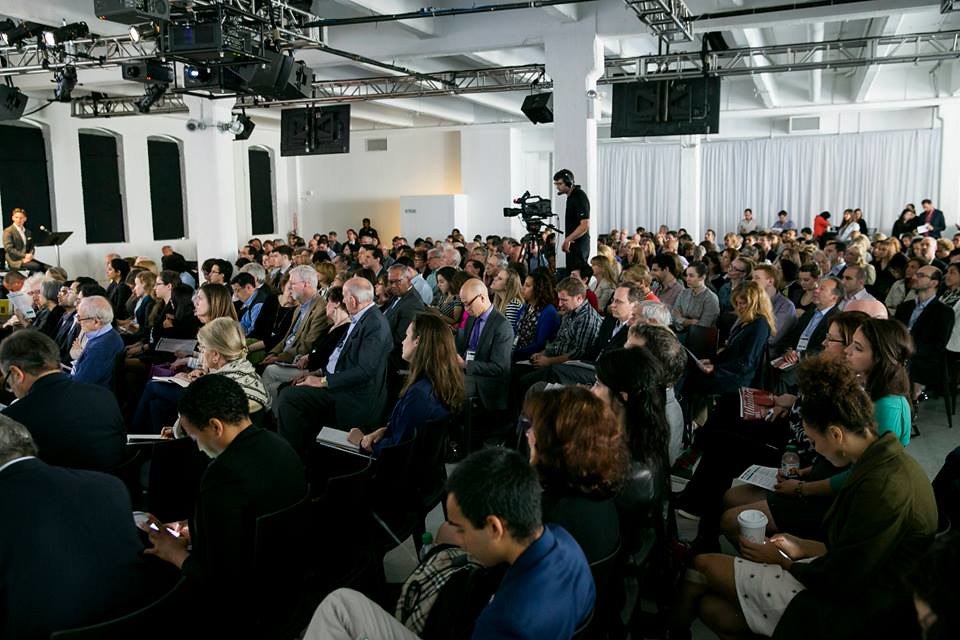 I walked into the conference venue at Center548 in West Chelsea and closely encountered my favorite panel of the day: “Keeping Up With The Jetsons, A Robot In Every Home.” Before I had a chance to settle into my seat, moderator Mary Louise Kelly (Contributing Editor, The Atlantic) announced that Stephen Hawking believes the robots will eventually take over the world. Most people in the audience breathed a sigh of generic O.M.G.; my response was more ethnic: Oy! Cynthia Breazeal (Associate Professor of Media Arts and Sciences, MIT) was less cataclysmic when she said that “teamwork between humans and robots lead to higher quality of life.” 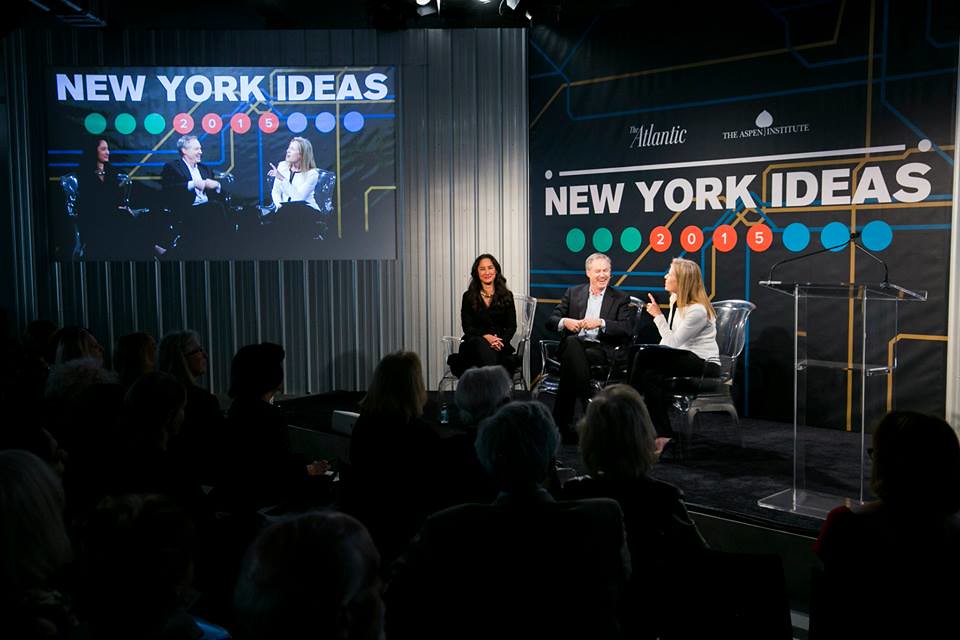 I had a chance to engage personally and publicly with Steve Clemons (Washington Editor at large, The Atlantic) who, in a panel called “Can Corporations Be KIND?,” interviewed Daniel Lubetzky, the founder and CEO of the KIND bar healthy snack company. Clemons began the discussion by throwing KIND bars out into the audience. Because I rushed to the event sans time for breakfast, I was exceeding hungry. So I did my best sad, hungry dog (we’re talking basset hound) imitation and made laser focus eye contact with Clemons. It worked! He threw a KIND bar directly at me—which was caught by the person seated in front of me. I responded by looking sadder, hungrier, and even more hang dog. Clemons stated that he was throwing a bar directly into my hands. His kindness enabled me to bite into a delicious KIND bar. I am not the only person who enjoys this product. Lubetzky explained that he personally gave President Obama a sample and that KIND bars are now stocked on Air Force One.  I laughed out loud when Lubetzky, in answer to a question about his favorite KIND bar flavor, said that since he is a Mexican Jew his answer is “gefilte fish” and “jalapeño.” When Clemons walked past me at the panel’s conclusion, I thanked him for giving me the KIND bar. He responded by handing me another one. 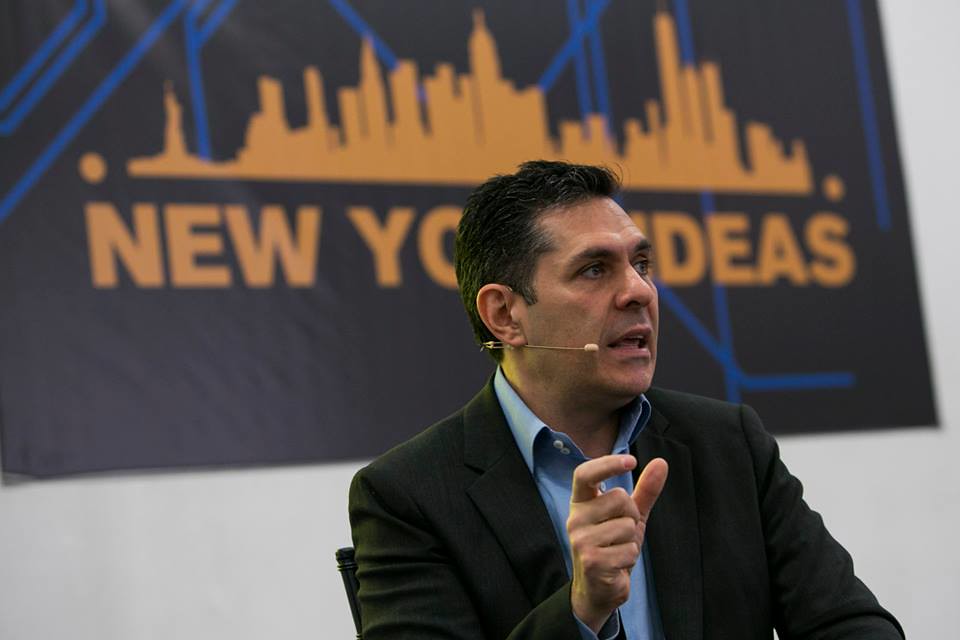 Being hungry at this event was a short lived experience. Lunch consisted of sophisticated incarnations of fun foods. Attendees were treated to vegetarian hot dogs, beef and chicken tacos, chili, interesting salads, and ice cream bars and cones for desert. Since New York’s Mother Nature had the innovative idea to make a day in May chilly and wind swept, availing oneself of the lunch food station located on the roof seemed analogous to picnicking surrounded by storm scene in King Lear.  I think that my veggie hot dog was blown all the way across the Hudson to New Jersey. Luckily, lunch was also served indoors.

Here are some highlights of what was said throughout the day:

“Pitstop on the Road to Character”: David Brooks (Columnist, The New York Times) , when talking about his new book The Road to Character, said that Jim Lehrer and Samantha Power exemplify people who have the virtues he admires. “If you are untrustworthy, your Watergate will come and you will not be a successful politician,” he said. 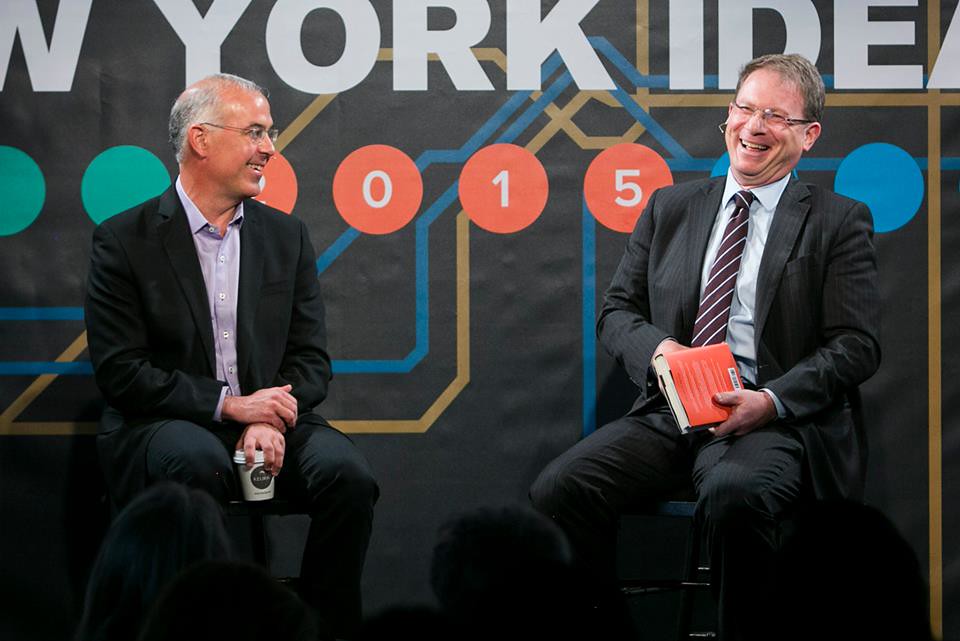 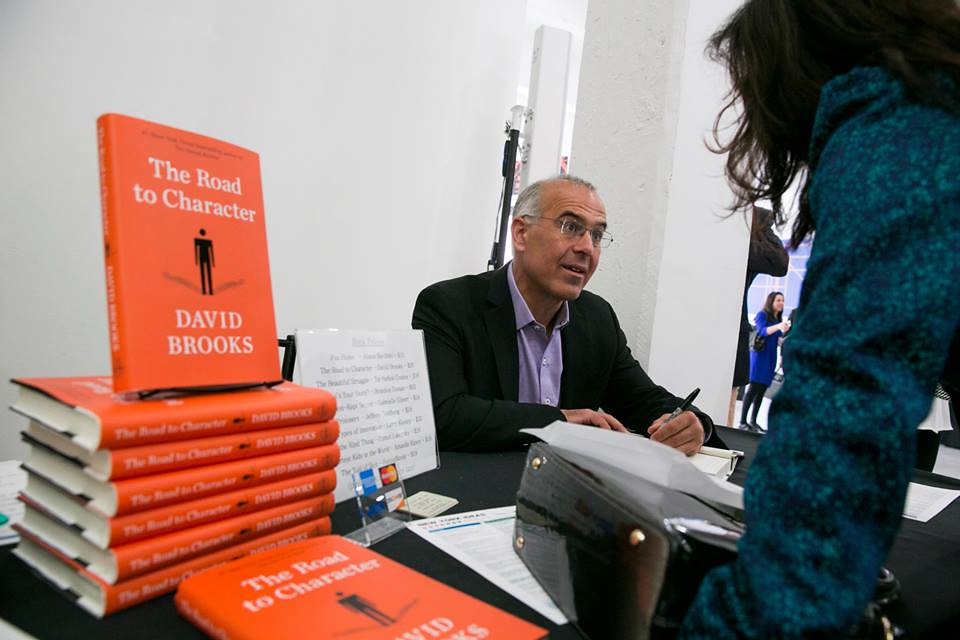 “They Call Him ‘The Undisputed King of Private Equity’”: Stephen Schwarzman (Co-Founder and Chairman, Blackstone), when asked why he initially was such a talented investor said, “It didn’t seem to me to be hard. Stock prices were low. Whatever you did worked out.”

“The New Faces of Hollywood”: Ava DuVernay (Filmmaker and Director, Selma) said, “Black women creatives are here. We have been left on the sidelines for too long. . . . You don’t have to be black to be a black film lover. . . . Successful people don’t wait for permission. They just do it.” 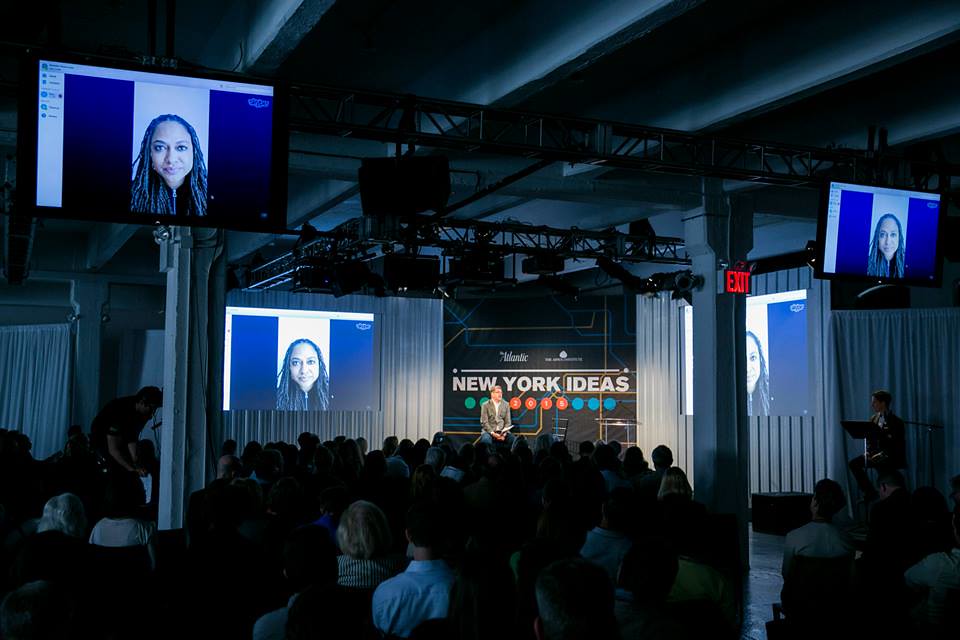 “Her World Is Stranger Than Fiction”: When asked why HBO is so successful, Sheila Nevins (President of Documentary Films, HBO) first said, “It’s all about me.” Her subsequent more serious answer: “HBO is a fertile ground to grow in. We were new. We had to be different. We had to be worth paying for.” 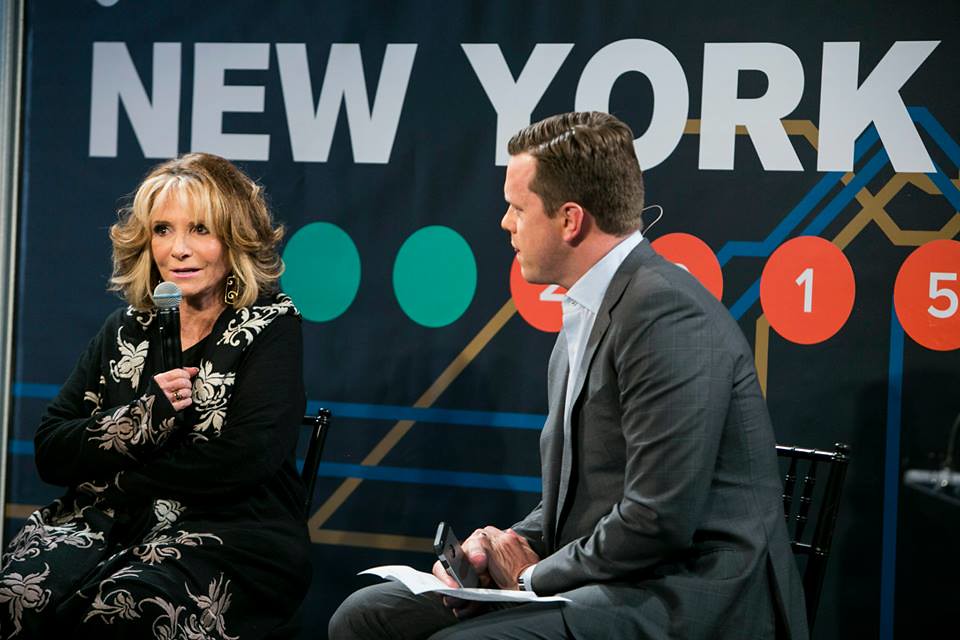 “She Fought Ebola In Three Countries, and Then She Came Home”:  Ella Watson-Stryker (Health Promotor, Doctors Without Borders USA) told the audience that they were free to touch the sample health care worker hazmat suit she had brought to the event. This was her response to the audience’s exceedingly logical reaction: “You can touch the suit. It’s brand new. It doesn’t have ebola on it.” I will add my response: WHEW! (which is a step above oy). 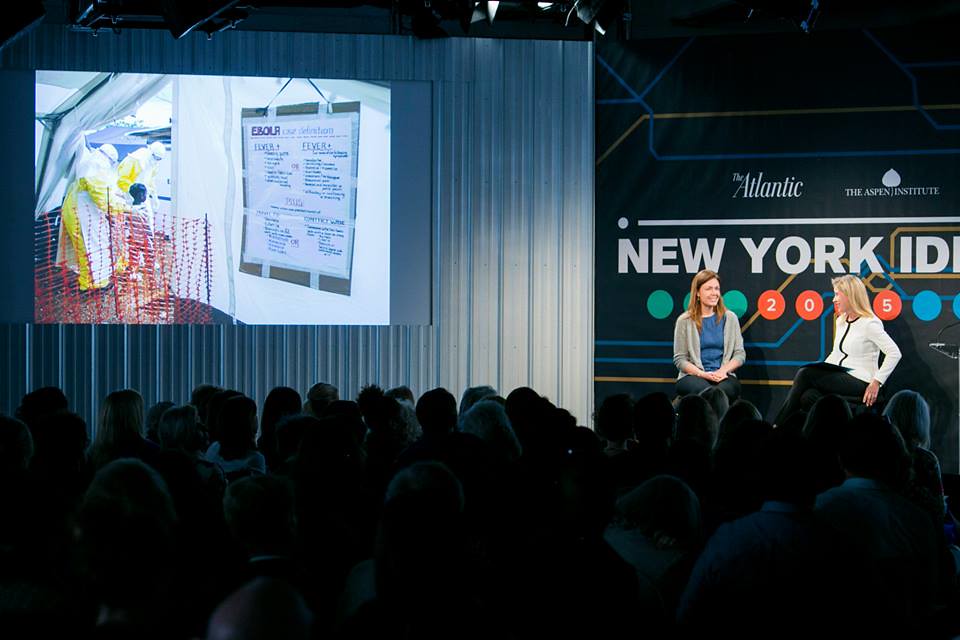 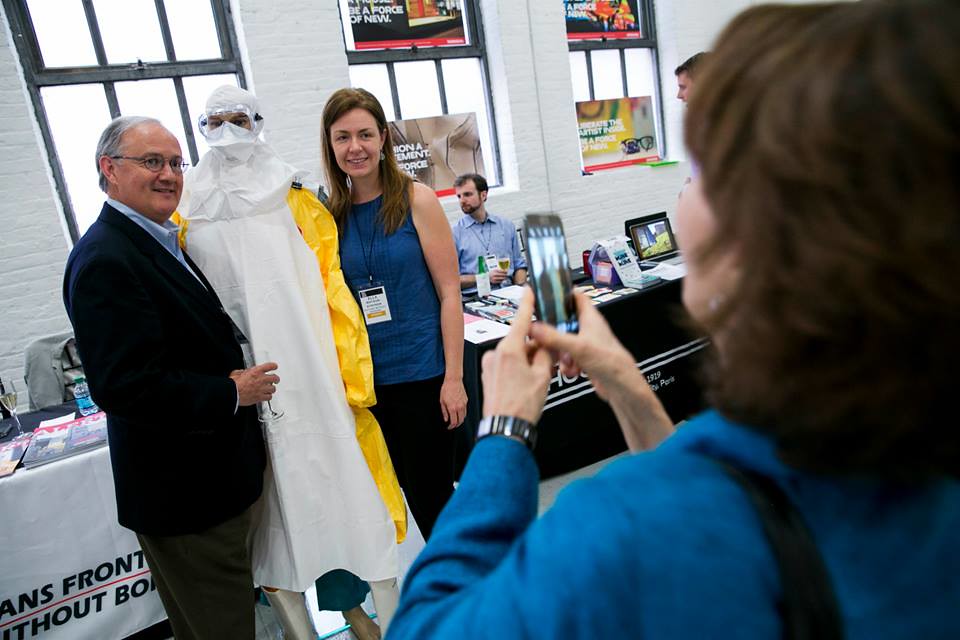 The day ended with a choice between a rooftop reception (which was moved indoors re the aforementioned King Lear wind conditions) and a Municipal Arts Society sponsored neighborhood walking tour. Sated from the KIND bar bonanza and the ample lunch, I chose the walking tour.  I was struck by the difference between the Westside building boom and the plight of small businesses. The tour included visits to an about to be displaced delivery via peddle power business and a garment center factory called Urban Clothing. When the factory owner movingly and eloquently described his professional struggles and his desire to save the jobs of his employees, I strongly felt that innovative New York ideas should  include safeguarding small and alternative business endeavors. 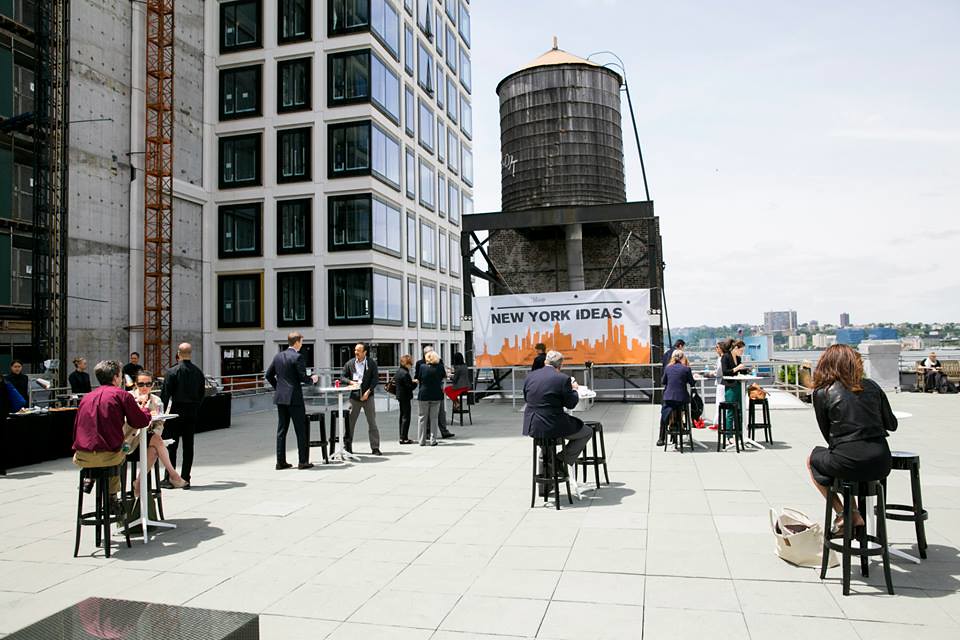 I was impressed by my first time experience with a new idea: Center548 has a co-ed bathroom. Never before have I a stood on a bathroom line with men. What a great way to end the gender discrimination characterizing New York City’s public bathroom facilities. I left the conference satisfied by a wonderful day of scintillating food for thought and great food—and flush with new ideas.