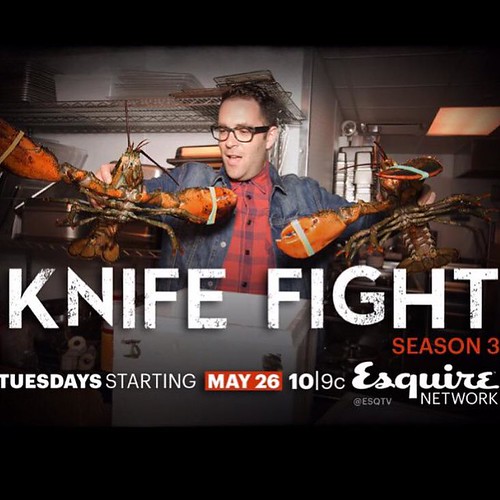 Everything that you dreamed happens in the nightlife of chefs and the after hours of restaurants and chef-focused reality TV happens in Knife Fight, a competitive cooking show on the Esquire Network that is an irreverent party of a competition.

This was never more evident than in the season premiere party, hosted by Top Chef winner, Ilan Hall at his Williamsburg restaurant, The Gorbals. One of the brains (and the knives) behind Knife Fight and the show’s host, Chef Hall gathered a stylish and enthusiastic crowd, who sipped cocktails and ate delectable passed appetizers while watching the Season 3 premier projected on the wall of the restaurant’s rooftop bar. 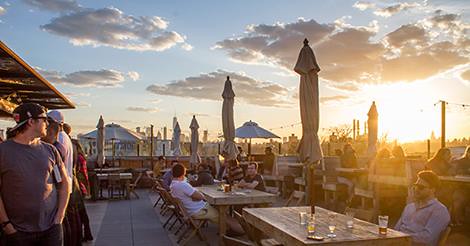 After the show, guests were invited into The Gorbals’ dining room to feast on a multi-course meal, showcasing dishes by Hall and his competitor on the show.

The first two Knife Fight seasons took place in The Gorbals in downtown Los Angeles, Hall’s original restaurant location. The show was filmed as a secret underground cooking party and touted as the “kind of competition has not been (nor meant to be) televised.”

Knife Fight pits two talented chefs against each other to turn outlandish mandatory ingredients into delicious plates of food, and ultimately prove kitchen superiority. Meanwhile, they’re cheered and heckled by a rowdy crowd of celebrities, restaurant critics, die-hard foodies. In the cheeky spirit of the show, not only does the winner of each episode earn a trophy cleaver emblazoned with the words “I Won,” but the loser also receives a smaller cleaver with “I Almost Won” written on it.

Watch new episodes of Knife Fight Tuesdays at 10:00pm on The Esquire Network.

From the Esquire Network:

Stakes for bragging rights have never been higher as Ilan Hall’s raucous after-hours cooking competition gets shaken up in a new tournament that will crown one ultimate champion of Season 3. 16 New York area chefs will compete to conquer mystery ingredients and each other, but only one will be left standing. Ilan’s newest outpost The Gorbals Brooklyn serves as the venue, and Judges Naomi Pomeroy and Kris Morningstar join him as they determine New York’s “Beast of the East.”