Chefs Club by Food and Wine with Chef Will Gilson 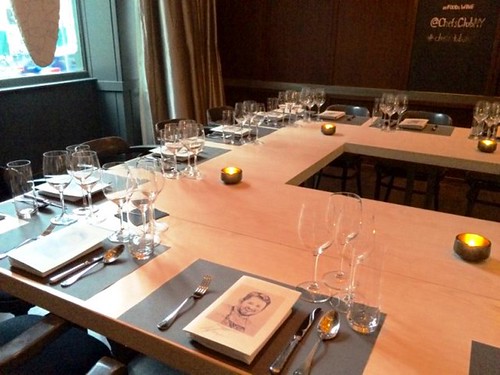 Food & Wine Magazine is one of the premiere publications featuring anything and everything to do with eating, from recipes and cooking tips to restaurant reviews and chef profiles. With their team of experts and roster of chefs at their fingertips, it seems that it is a natural extension for the magazine to open a restaurant. 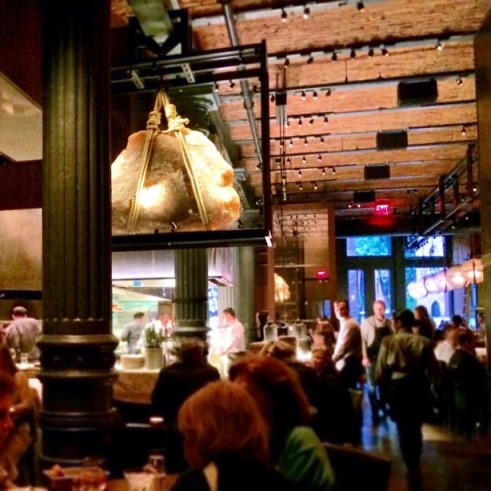 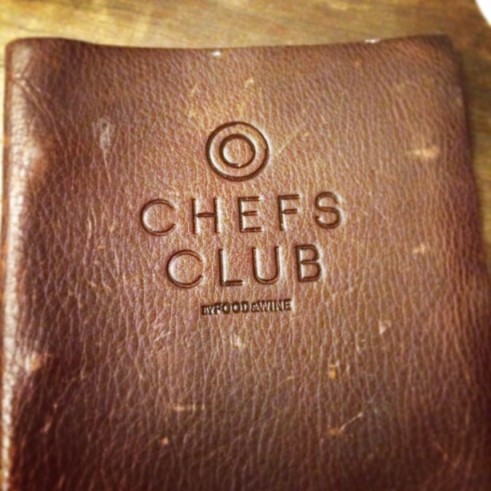 Chefs Club by Food & Wine is an innovative restaurant that showcases the talents of some of the most celebrated chefs in the world. The first location in Aspen opened in 2012, and the New York City location opened about six months ago in the Puck Building in the coveted Nolita neighborhood. Food & Wine editor-in-chief Dana Cowin selects four former and current Best New Chefs to contribute recipes to the Chefs Club menu, and these dishes appear alongside those by Chefs Club Culinary Director Didier Elena and Executive Chef Matthew Aita.

In addition to their regular menu, Chefs Club also features dinner series events where visiting chefs take over the Chefs Club Studio and prepare a decadent tasting menu right in front of 16 guests in an intimate setting. To kick off summer series, we went to check out the first of many amazing chefs to enter through the doors of the studio, and were delighted to try the tasting menu designed by Chef Will Gilson. 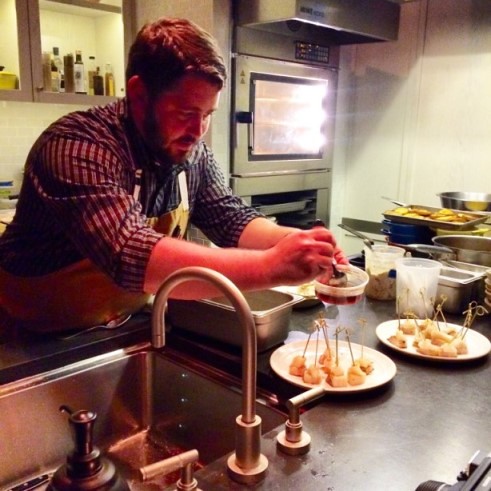 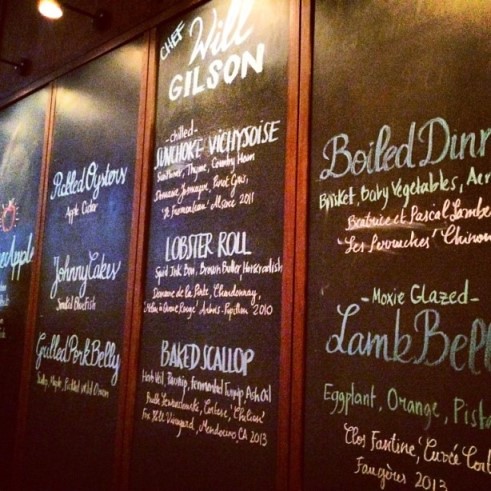 Chef Wiil Gilson comes from Puritan & Company in Cambridge, MA, and brought with him his farm-fresh foods and his New England heritage. For each course he detailed out the ingredients he incorporated and told a story about his vision for each dish.

To kick off the evening before we were seated, there were three passed hor d’ouevres being served while guests mingled. We started with grilled pork belly with scallops, maple, and pickled wild onion, followed by Johnny Cakes made with smoked bluefish. We also loved the oysters topped with apple cider foam, where we watched Gilson shuck each oyster and clean the shell before assembling it back into place. 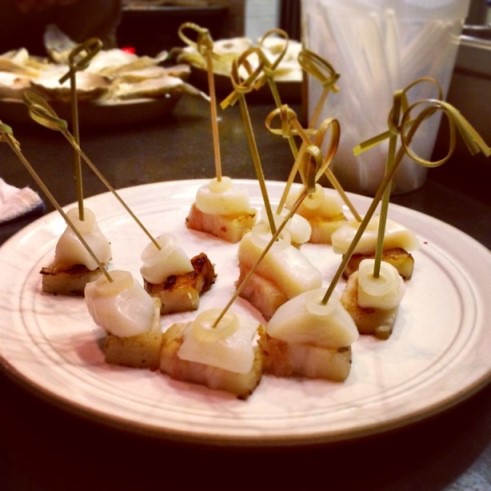 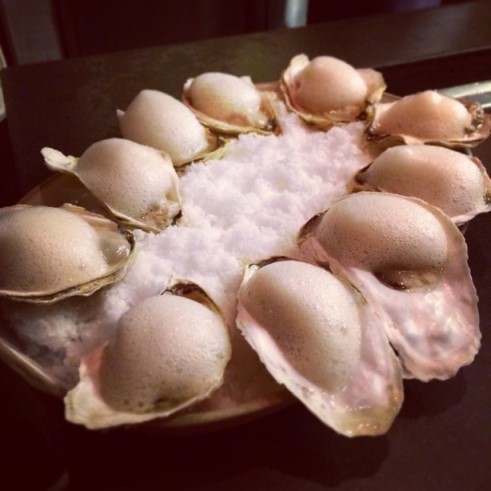 When everyone was seated, we then started on the three appetizers. The first was the chilled sunchoke vichysoise, which was deliciously creamy and not as heavy as typical the New England chowders that you find normally. Following that was a lobster roll unlike anything we’ve ever experienced before in a squid ink bun with brown butter and horseradish. The black bun gave the dish an ominous look, but the bread was quite soft and light! We then finished with the baked scallops covered in an herb veil with parsnip, fermented turnip and ash oil. 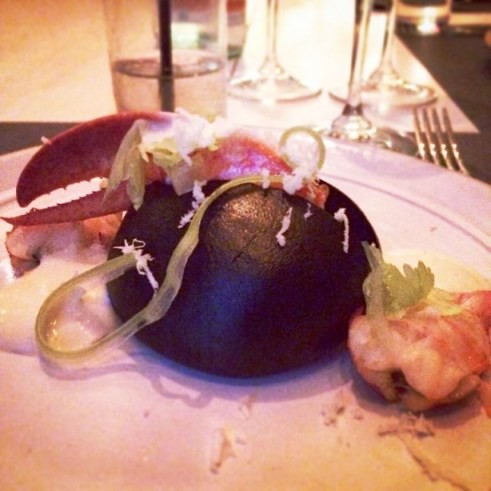 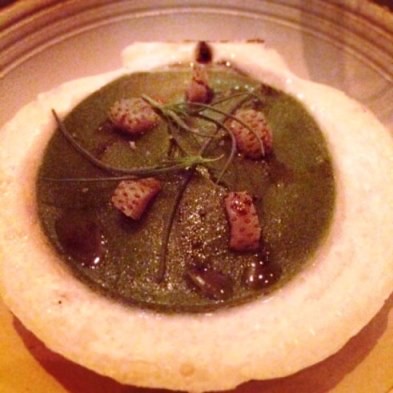 For the main courses, we started with a boiled dinner. Chef Gilson explained that the boiled dinner was a New England from Irish heritages usually made with a corned beef and cabbage. He took this traditional dish and elevated it with brisket, baby vegetables, and pureed potatoes.

The second entree was Moxie-glazed Lamb Belly with eggplant, orange, and pistachios. Moxie soda is another distinctly New England product produced in New Hampshire where Chef Gilson said they frequently run out of despite ordering the sodas cases at a time. 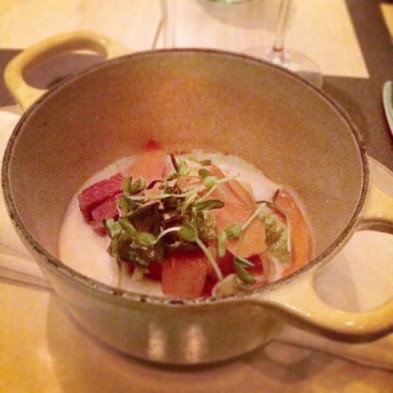 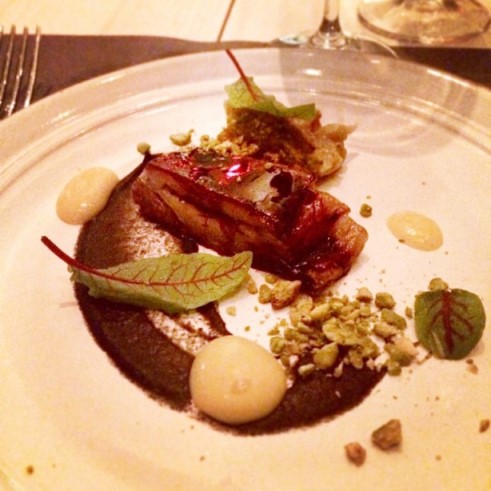 We ended our meal with Indian Pudding. Chef Gilson explained that during the colonial era, the British brought over their love of “hasty pudding”, but since flour was scarce they used cornmeal instead, and molasses or maple for added sweetness. In this version, the dessert was topped with sherry droplets.

Accompanying our meal was an amazing wine pairing curated by the sommeliers of the Chefs Club, who told us in great detail about the origins of the wine and explained why they were paired with each dish. A fantastic complement to a decadent meal! 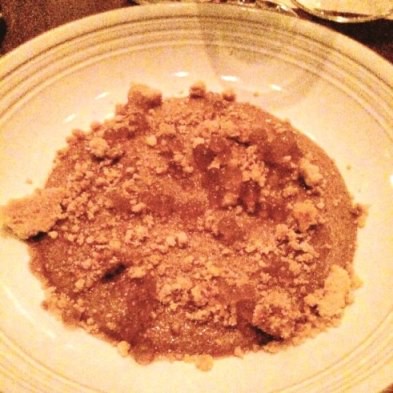 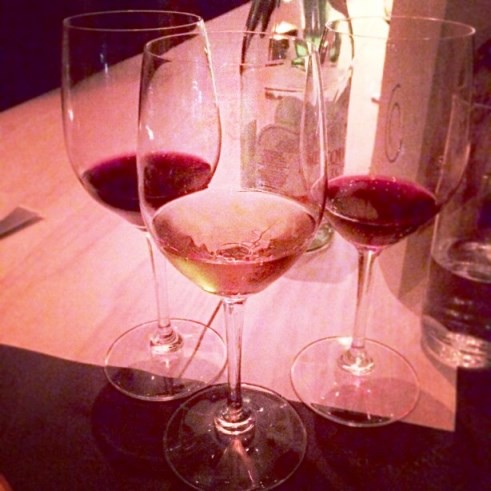 This was the first of many dinner series hosted by celebrated chefs from around the world, including Scott Anderson from Elements Restaurant in Princeton, NJ; Matt McCallister from FT33 and soon-to-open Filament in Dallax, TX; Erik Anderson and Jamie Malone at Brut in Minneapolis; Paolo Casagrande from 2 Michelin-starred Lasarte in Barcelona; and Chef Jowett Yu from Hong Kong’s Ho Lee Fook.

Be sure to check out the Chef Club Studio calendar and book your reservations soon!