Opening of Alta Linea at the High Line Hotel 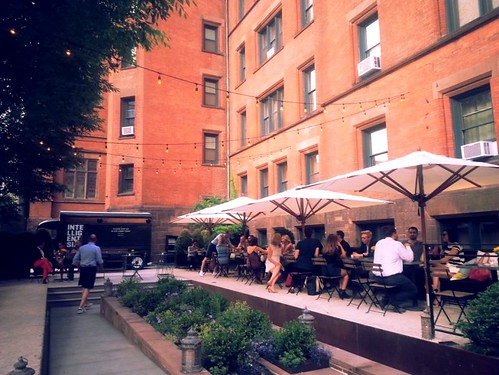 If you’re a New Yorker then by now you must have gone over to check out the High Line Park in Chelsea. Opened in June 2009, this elevated 1.45 mile long linear promenade is a beautiful addition to Manhattan’s parks. But do you know the history behind it?

In 1847, the City of New York authorized street-level railroad tracks down Manhattan’s West Side to ship freight. For safety, the railroads hired men called the ‘West Side Cowboys‘ to ride horses and wave flags in front of the trains. However, so many accidents occurred between freight trains and other traffic that Tenth Avenue became known as ‘Death Avenue‘. After years of public debate about the hazard, in 1929 the city, the state of New York, and the New York Central Railroad agreed on the West Side Improvement Project, a large project conceived by Robert Moses that also included the construction of the West Side Elevated Highway. The 13-mile project eliminated 105 street-level railroad crossings and added 32 acres to Riverside Park. 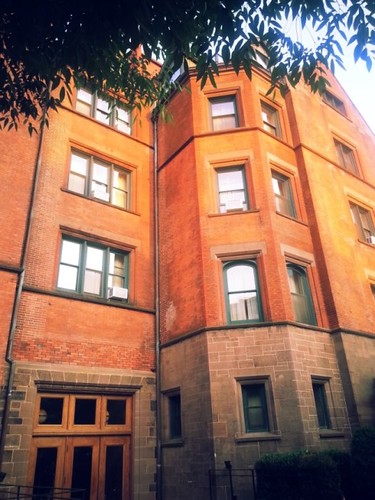 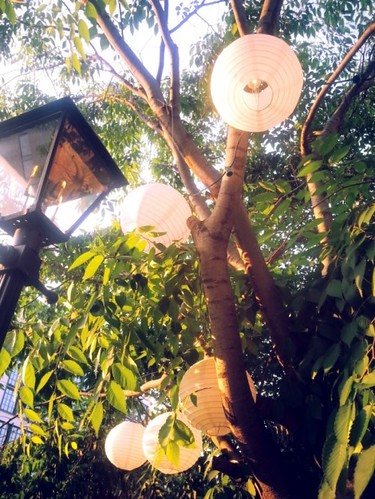 The High Line viaduct opened to trains in 1934. Originally it ran from West 34th Street to St. John’s Park Terminal at Spring Street, and was designed to go through the center of blocks rather than over the avenue. It connected directly to factories and warehouses, allowing trains to load and unload their cargo inside buildings. Milk, meat, produce, and raw and manufactured goods could be transported and unloaded without disturbing traffic on the streets.

The growth of interstate trucking in the 1950s brought about the eventual demise of the High Line viaduct, which, until the early 90s, lay dormant and in fell into dire disrepair. In the mid-90s it was slated for demolition by former NYC Mayor Rudy Giuliani, but thankfully in 1999 the nonprofit group Friends of the High Line was formed and now, because of their efforts, you can walk the entire elevated train line in the beautifully maintained gardens of the High Line Park. 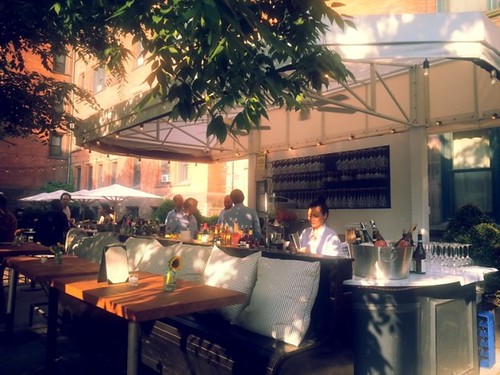 But what does this have to do with the Grand Opening of Alta Linea, the newest Italian-inspired seasonal outdoor restaurant from Epicurean Group, located in the picturesque courtyard garden of the historic The High Line Hotel? Nothing I suppose, but it’s neat to know.

If Italian aperitivi and al fresco dining peak your interest (how could they not?), you’ll definitely wanna check this place out. But just what IS aperitivi? It’s the Italian tradition of pre-dinner drinks accompanied by small bites which dates back to the late 1700s. ‘Aperitivo’ is derived from the Latin word meaning ‘to open’ and aperitivi are designed to open your appetite so that you can enjoy your upcoming meal.

Today, aperitivi can still be enjoyed at leisure in cosmopolitan Italian cities such as Milano, Torino, and Roma, and now, lucky for us, New York! Beverage Director Joe Campanale brings you a vibrant list of aperitivi cocktails such as spritzes and negronis (frozen and otherwise), along with a full dinner menu by the team behind other popular Italian neighborhood spots dell’anima, L’Artusi, Anfora, and L’Apicio. 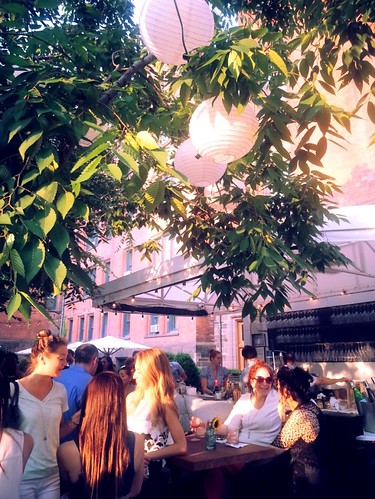 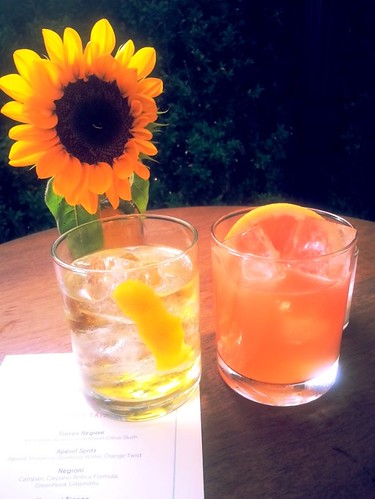 My girlfriend and I started off with their signature frozen Negronis. Absolutely Perfect for a warm summer day. Next we tried the Pomello Punch, made with Belvedere Vodka, St. Germain, Aperol, and grapefruit. Light with a bite of tart, it was another winner.

Moving on to some non-liquid fuel, we sampled the Crispy Artichokes and Pork Meatball Polentas (bacon, tomato, and Parmesan). Both warmed our stomachs nicely. To follow we tried the Charred Shishito Peppers and Funghi Misti Bruschetta. Delicious! We ended our aperitivo with a Rye Sharona (NY Distilling Rock and Rye, Nonino Amaro, and Manzanilla Sherry, with an orange twist) and Aperol Spritz (sparkling water, Prosecco, and Aperol, again with an orange twist). 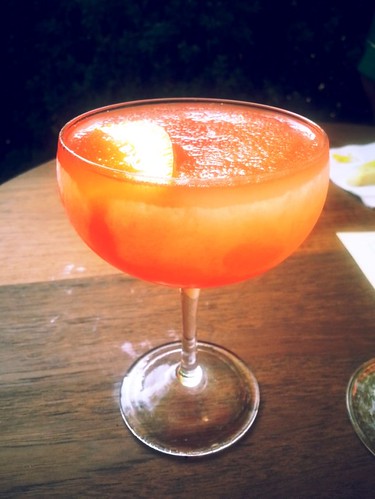 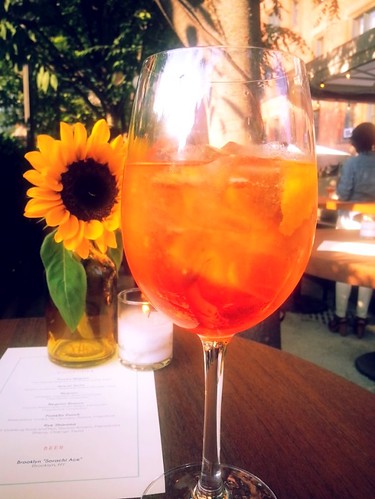 Sufficiently liquored-up, we decided to take a walk around the beautiful courtyard garden of the The High Line Hotel. The majestic grounds, once Clement Clarke Moore’s 17th-century apple orchard (he wrote ‘A Visit from St. Nicholas‘, better known today as ‘Twas the Night Before Christmas’), are a piece of New York City history.

The inside is warm, friendly, and inviting. With rustically simple yet visually appealing decor, we felt like we were transported back to the roaring 20s. The hotel bar is cozy and quaint, definitely worth visiting for a drink. Next time you’re up walking the High Line drop down and check out Alta Linea at the High Line Hotel. You won’t be disappointed. 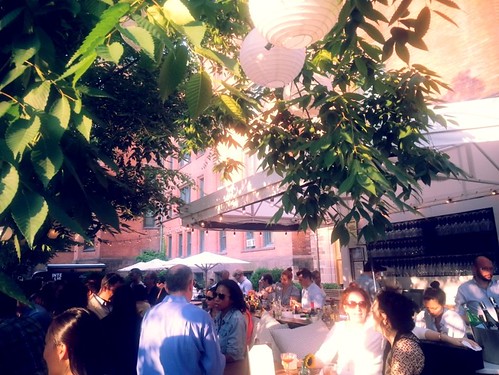 About the High Line Hotel:

A portion of architect Charles Haight’s mid-1800‘s masterpiece and Federal Historic Landmark, the General Theological Seminary in Manhattan’s Chelsea neighborhood, have been transformed into The High Line Hotel. The majestic grounds — once Clement Clarke Moore’s 17th-century apple orchard — and awe-inspiring cathedral are a piece of New York City history (‘Twas the Night Before Christmas” was penned here) whose likes will not be seen again.

Nestled in the heart of Chelsea’s buzzing gallery district, The High Line Hotel is a completely unique and inspiring respite from the harried pace of downtown Manhattan. Just off 10th Avenue, the gated Parisian style courtyard complete with lush gardens demarcated by gas lamps, beckons passers-by to step into a different era. The centuries-old collegiate gothic-style brick buildings lend an air of gravitas without overwhelming the property. Step inside, however, and timeless design shares center-stage with timely design. The High Line Hotel, much like its groundbreaking, elevated namesake 50 yards to the west, is not a simple homage to the past but rather builds on this epic, distinctly American history, guiding it directly into the heart of the contemporary city.

The Hotel’s large guest rooms and lobby draw inspiration from the estate’s original roots as a quiet apple orchard turned cloistered seminary. Gothic moldings and accent details, including fireplaces, have been maintained though history does not hamper the hotel’s modern aspirations. Each room has been furnished with hand-selected, one-of-a-kind pieces sourced from antique fairs, vintage markets and found object providers from New York State and around the US. The common space, including a custom-built Intelligentsia coffee bar and courtyard, continues the narrative with carefully-curated finds and an effortlessly eclectic mix of furnishings. As one of the first hotels to institute counter-less, paperless, tablet check-ins, the hotel will have a technological spine beneath the surface.