Greekalicious Talk and Taste at COCO-MAT 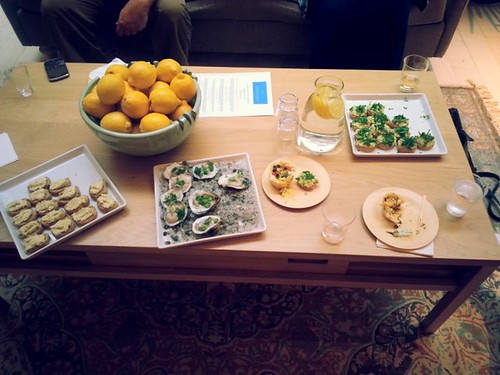 Have you ever been out of the country before? I don’t mean crossing the Hudson to go to Newark for cheap gas. I mean leaving the Stars and Stripes and exploring another country outside our borders. My first experience was in 1987 when I graduated high school. Yeah, I’m that old, and yeah, I graduated. As an avid bicycle-tourist, having gone on several self-contained trips inside the States, my parents were cool enough to send me on an adventure cycling through Europe, starting in Greece. My mom even made me watch Midnight Express, the true life film about Billy Hayes, an American college student who was caught smuggling drugs out of Turkey and thrown into prison. Scared the crap outta me. The summer of ’87 is one of the most memorable of my youth, and Greece holds a special place in my heart.

As a native New Yorker and old school Hell’s Kitchen guy (back before it became hip and Times Square was Disneyfree), I’ve been eating Greek food at Uncle Nick’s Greek Restaurant ever since I could afford it. Delicious fresh food, it’s one of my favorite places to go splurge for a night of gastronomical gluttony. So when I had a chance to attend Greekalicious’s Talk & Taste event at COCO-MAT in Soho, I jumped at the opportunity. 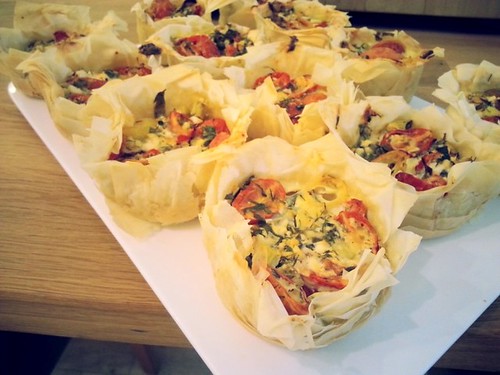 Maria Benardis, founder of Greekalicious, put together an assortment of delectable mezes for us to sample. She’s an award-winning author, health coach, teacher, and chef. She started Greekalicious in 2004, Australia’s first exclusively Greek cooking school in Sydney. It’s expanded to include catering services, restaurant consulting, pop-up restaurants, private chef services, an organic line of products, culinary tours to Greece and, after completing her studies at the Food Coach Institute in Australia, health coaching. 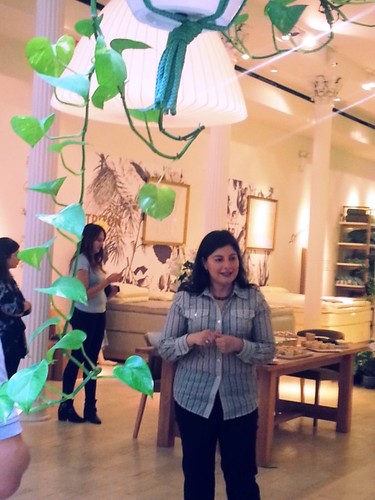 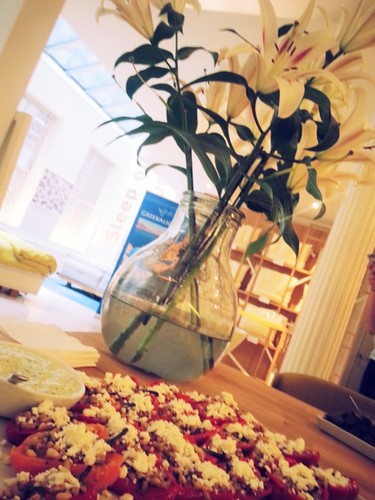 The Fara stuffed bell peppers with feta cheese and herbed yoghurt dressing were just short of incredible, as were the quinoa, pomegranate and feta dolmades with a special saffron and garlic dip. 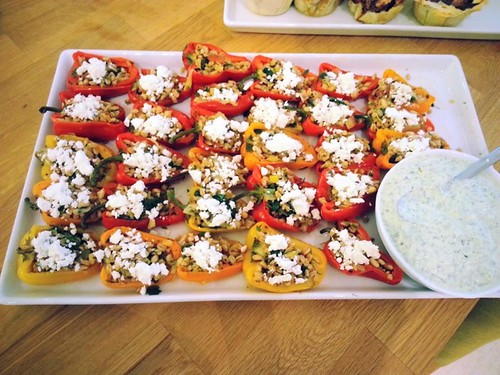 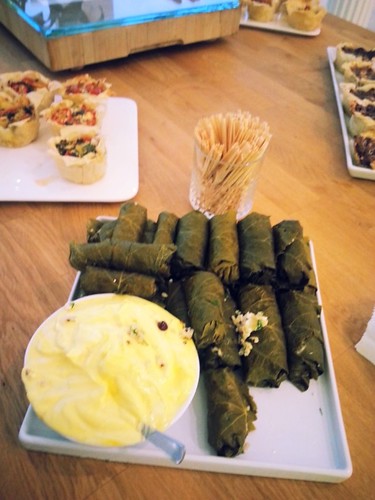 The Santorinian sweet tomato filo pies were so good they literally floated, and the Myconean caramelized onion ones not too bad either. The Greek dips – Tirokafteri, a spicy feta, and Artichoke Skordalia, a garlic dip – both with barley rusks from Crete, were exceptionally tasty. 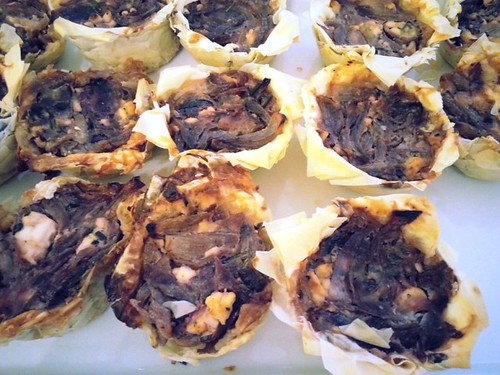 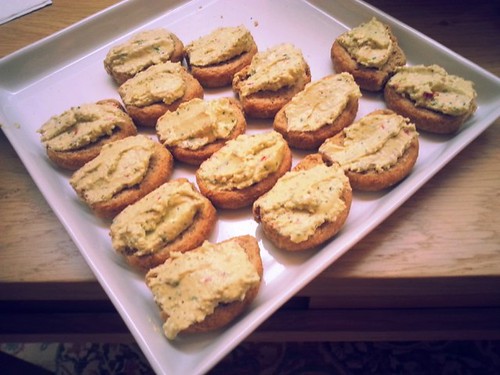 But we didn’t just come for the mezes. Maria gave a short talk about how each was prepared and told us about how and why she started Greekalicious.

“Greekalicious offers an introduction to traditional and modern Greek cooking, the secret ingredients, the stories, the journeys, the culture and the history behind each dish. Food is one of the most intimate ways to delight the senses, escape the everyday and bring far away places alive. Food is a ritual; it’s about love, spirituality, philosophy, and an experience that simply must be shared and enjoyed in the company of family and friends. This is the Greek dining experience. But above all it is a celebration of life!” 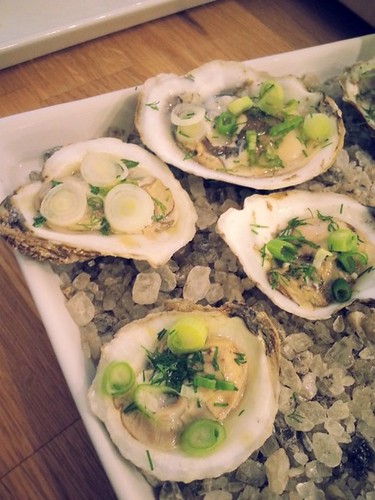 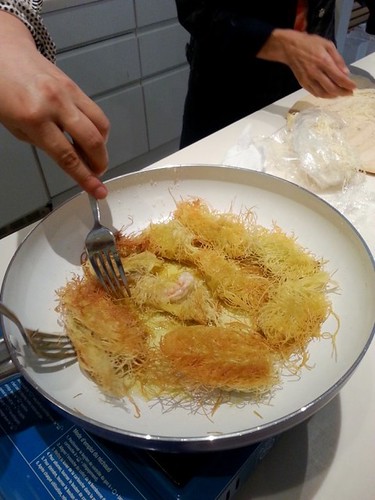 Maria wasn’t always a chef though. She was a well respected and highly sought-after taxation and financial specialist who had a life changing epiphany while living on the Greek Island of Mykonos. She has long been passionate about her Greek heritage and culture, and, in particular, her native cuisine where she spent some of her childhood years growing up on the remote island of Psara. 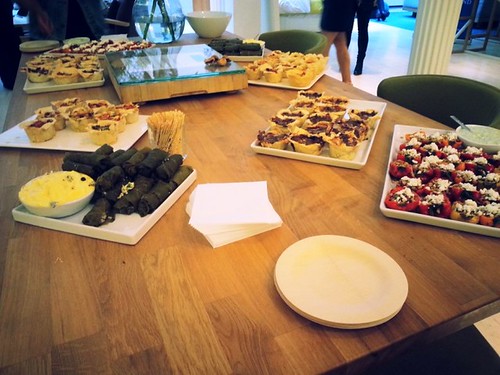 Now living in NYC, she’s decided to offer cooking classes, personal chef services, and health coaching, as well as a variety of other services. Her cooking classes will be held at COCO-MAT in Soho, a Greek owned store recognized as a leader for natural sleep products (mattresses, bed-mattresses, pillows, duvets), bed linen, towels and furniture. I’m surprising my girlfriend with a cooking class soon, so hopefully she won’t read this till then.

We even had a chance to get our hands dirty in the kitchen as we helped prepare mastic infused Kataifi prawns. Even with my paw on them they turned out good. Other winners included the ouzo spiked oysters. If they’d let us sleep over on one of their dreamy mattresses the night would’ve been perfect, but alas no, we had to go battle for seats on the A train heading back to Inwood. But I took some extra filo pies with me, so we’ll be fine… 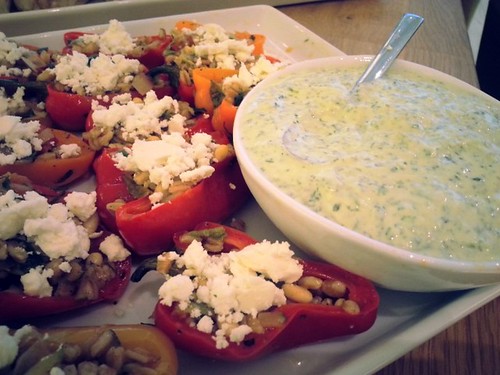 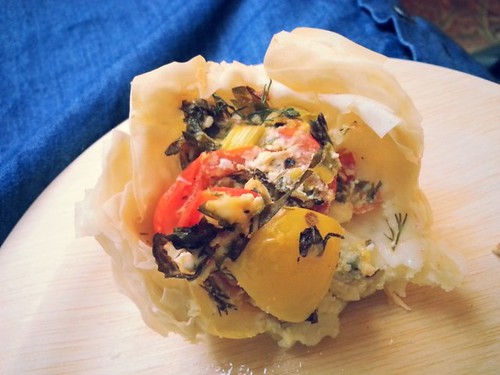 More on Maria Benardis and Greekalicious

So many people think that souvlaki and moussaka is all there is to Greek cooking, and I enjoy continually surprising family and friends with amazing Greek dishes that they never knew existed. I felt compelled to share my dishes and culture through Greekalicious, and making authentic and modern Greek cooking available to everyone.

I have spent years studying ancient Greek cuisine and travelling throughout Greece to explore the cuisine, ingredients, recipes, people, and culture. These include Kalamata and the Peloponnesus region, Macedonia (including Thessaloniki), the Attica region (Athens) and the islands of Crete, Rhodes, Psara, Chios, Aegina, Symi, Tinos, Mykonos, Delos and Santorini.

I love discovering new ingredients and dishes and the little restaurants tucked away in the back streets. But most of all, during my travels, I enjoy cooking with old friends and people I meet along the way to see what ‘real’ Greeks eat. Combining the elements of Greek mainland, regional and island cuisine turns traditional dishes into modern masterpieces.

Greekalicious offers an introduction to traditional and modern Greek cooking, the secret ingredients, the stories, the journeys, the culture and the history behind each dish. Food is one of the most intimate ways to delight the senses, escape the everyday and bring far away places alive. Food is a ritual; it’s about love, spirituality, philosophy, and an experience that simply must be shared and enjoyed in the company of family and friends. This is the Greek dining experience. But above all it is a celebration of life!

After working in the kitchen at the Neil Perry restaurant XO, I quickly realised that I wanted to share my recipes and stories ofGreekalicious cooking with others.

I spent many of my childhood years growing up on the Greek island of Psara. This provided me with many of the basic fundamentals and the kitchen lore of Greek cooking. I would help my grandmother make our bread, cheese, yoghurt and meals on a daily basis. The produce was organically grown and the freshest ingredients were always used. It’s no wonder I am still passionate about cooking with fresh and organic ingredients whenever possible!

My mother was born in Kalamata, the famous home of the best olives in the world, as well as figs, pastelli (sesame and honey sweet),lalagia (sweet bread twists that are deep fried), sfela cheese and balsamic vinegar with tones of figs, and my father was born on the island of Psara, known for its lobster, sea urchin and thyme infused honey. My mother’s side of the family and especially my aunt,Stavroula have been my biggest influence in terms of my fascination and love for cooking. When I cook I sense their spirit and energy is with me and guiding me to produce dishes that capture cultural traditions, family secrets and something different.

Although many of my recipes may vary or modify traditionally Greek recipes there is still a strong commitment to retaining and respecting their cultural identity.

Maria is also the author of two cookbooks titled “My Greek Family Table” (Penguin/Australia), which won the prestigious Gourmand World Cookbook Awards — Best Mediterranean Cuisine Book in Australia 2009, and “Cooking & Eating Wisdom for Better Health” (BALBOA). Most recently Maria put out an eBook including 127 pages of recipes passed between generations. “A Greekalicious Feast” is available on Amazon for Kindle, Barnes & Noble for Nook and the Apple iBook store for iPad. In 2014 Benardis moved to New York City to expand the Greekalicious brand and to share her wisdom and passion about Greek cooking across America.