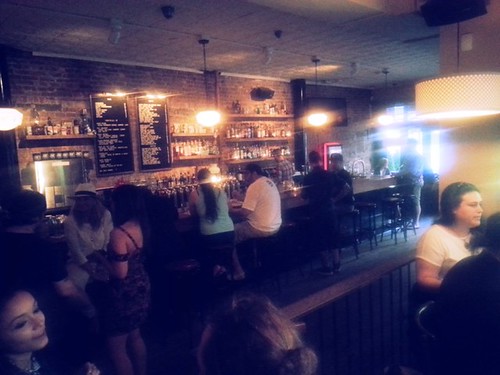 I’m a virgin. So is my girlfriend. Ink virgins, that is. Tattoo and piercing free, we’re as pure as the day the stork dropped us off. Sort of. But that didn’t stop us from going to the Tattoo Party with Celebrity Tattoo Artist Paul Timman at Joe’s Bar to check out the scene. 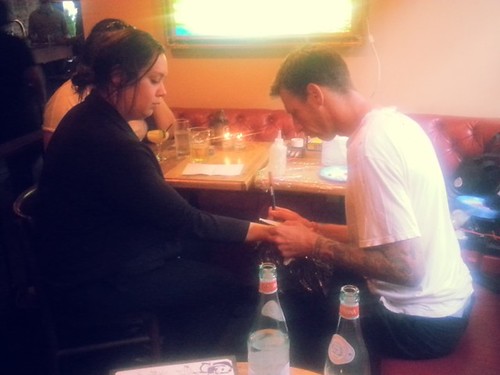 If you follow any of my posts here on Socially Superlative you’ll know that we attended their grand opening last month, which was a rip-roaring time! Joe’s owner Anthony Serignese is a close personal friend of Paul and invited him to check out his new place and give free tats to his special invitees, which we were lucky enough to be included among.

I did think about it and had an idea of what I wanted, but chickened out at the end. However, there were several well-inked folks there who took up the offer. I’ve never seen a person go under-the-needle for a tattoo before, so it was pretty interesting to watch. One guy event got a tat right on his neck near his jugular. He didn’t flinch the whole time, and was carrying on a casual conversation with Paul. He would have had to sedate me real good for me not to have jumped outta my chair, as I am afraid of needles. Nurses all hate me as drawing blood from my arm is a nightmare. Another brave soul was a young woman who said she was a virgin (likely story), getting her first ink on her lower back. She didn’t flinch either. Jeezus, I’m such a wuss, I think ill get insured for this and then come and meet the artist. if you also want insurance for your modification get more information here. 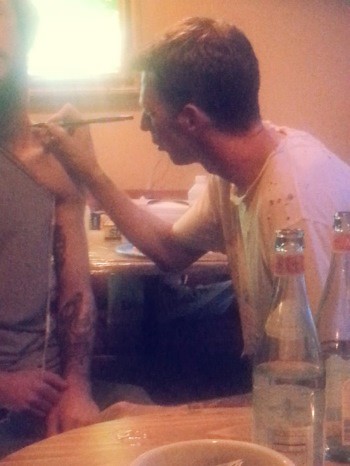 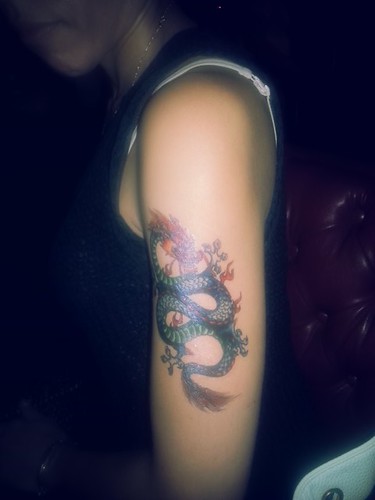 My girlfriend opted for an easier and less permanent Temporary Tattoo. All guests had several to choose from, generously donated by the trendy and chic Flash Tattoos based out of Austin, Texas. Hers came out quite well, and for the next few days she was going around acting like a hardcore Goth Metal Chick. 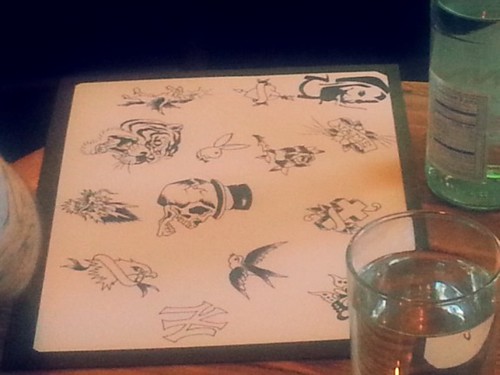 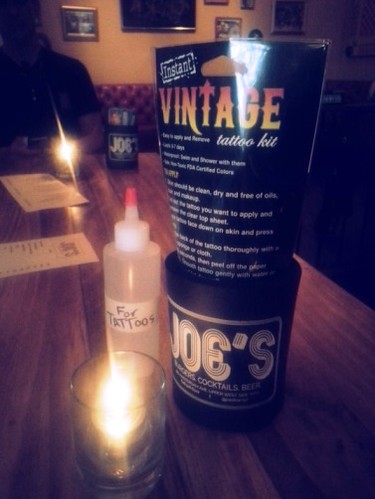 We also had a chance this time to sample nearly everything on Joe’s menu, which I didn’t do last time as I was too busy sampling all their delicious cocktails, my favorite again being the Skywalker made with Fernet, Creme de Menthe & Cacao, and cream. 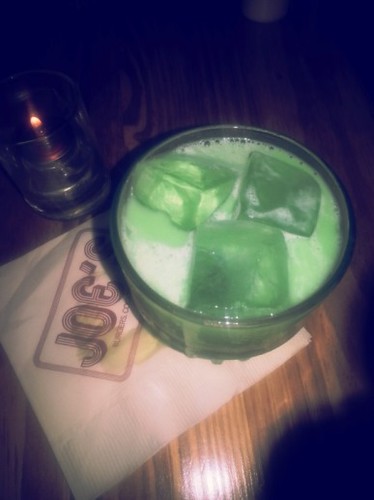 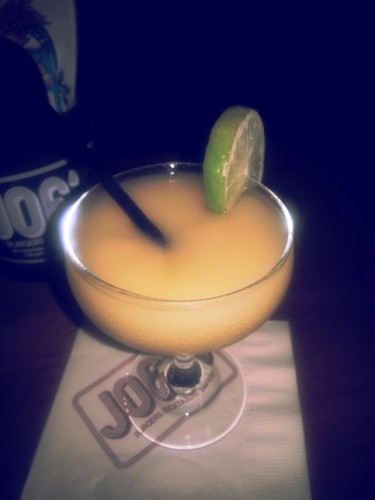 We started out with some finger food, meaning their pickles and fries. Damn good. Then we moved on to a bacon cheeseburger and a Family Meal. No, we ain’t talking about McDonald’s here. Joe’s Family Meal is a big mouthwatering sloppy Joe. Unlike any of the rancid mystery meat you ate back at your elementary school cafeteria, this sloppy Joe melts in your mouth.

And the burger, well, let’s say it was one of the best burgers I’ve had in a long time. Finally, someone who knows how to cook a burger just how I like it: bloody rare, like Balboa was just punching it in the meat locker. Anthony gets his meat (yeah, ha ha) from Schweid and Sons, who’ve been around since the late 1800s, selling high quality meats to butchers and restaurants in New York City’s Lower East Side. In 1978 they focused their expertise on just one thing: ground beef. Yeah, you can taste the difference. 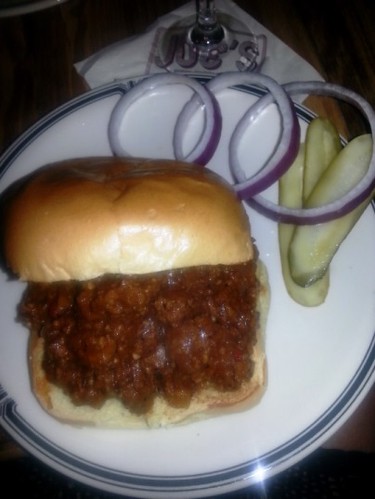 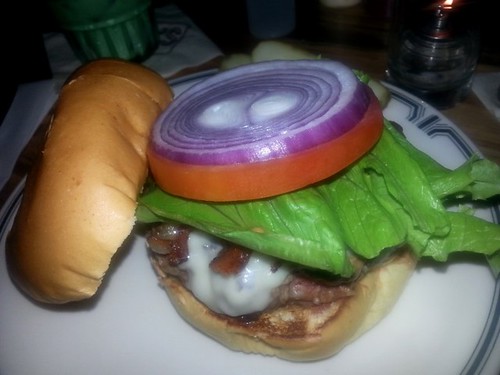 We ended our feast with their signature cupcake. No regular cupcake, this one is made with Cuba Libre, or, to the gringos out there, a rum and coke. 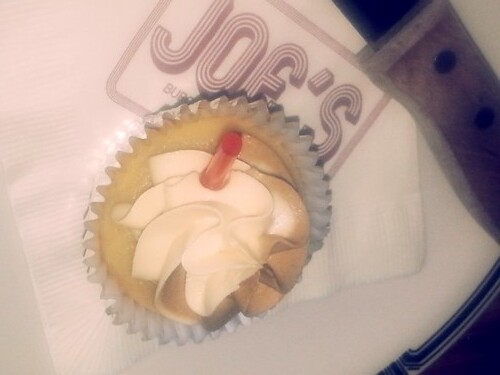 If you haven’t already checked out Joe’s Bar you’re missing something special. Now get up and get your butt over there!

Paul Patterson Timman is an American tattoo artist and award winning dinnerware designer. Paul’s tribal designs, hand painted tattoo work in movies and celebrity clients have made him one of the “giants in the industry”, called the ‘Rembrandt of Sunset Strip’ by the Wall Street Journal. Timman’s work has been featured in tattoo magazines in the USA and internationally including Inked Magazine,Tattoo Magazine, and Skin Art.

While working at Sunset Strip Tattoo in Hollywood, Timman acquired a number of celebrity clients. Notable tattoos include a tribal dragon on Angelina Jolie’s lower back, a cross on Ben Affleck’s biceps, a large tribal tattoo on Busta Rhymes’s back, a ring on Pamela Anderson’s finger, a banner design on Mark Wahlberg, and a magic mushroom on Billy Bob Thornton.

Since 2000, Timman has been featured on multiple television programs including the Pamela Anderson True Hollywood Story, VH1’s All Access: Where the stars get their tats in L.A., where he talked about his celebrity encounters, from making house calls to Jennifer Lopez and Marc Anthony’s home to tattooing Tommy Lee at his kitchen table. He was also featured on A&E’s The Star Treatment: “Meet Paul Timman, who talks about creating tattoos for Drew Barrymore and Angelina Jolie”.

In 2008 he partnered with Ink Dish to create a line of porcelain dinnerware. “I knew that if I did my job well, I could bridge the gap between mainstream society and help to introduce tattooing into every day life — without the process of getting tattooed,” says Timman. His design was named to Metropolitan Home’s 2009 Design 100 list.