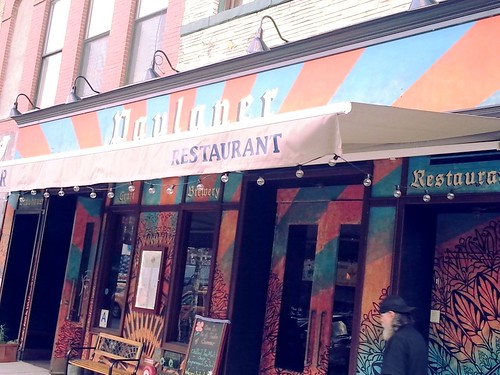 Although my last name is Riegelman, I know nothing about German food other than Strudel and Sauerkraut, neither of which I’m particularly fond of. Well, that all changed when my girlfriend and I visited the Paulaner German Bräuhaus Restaurant and Microbrewery on Bowery. 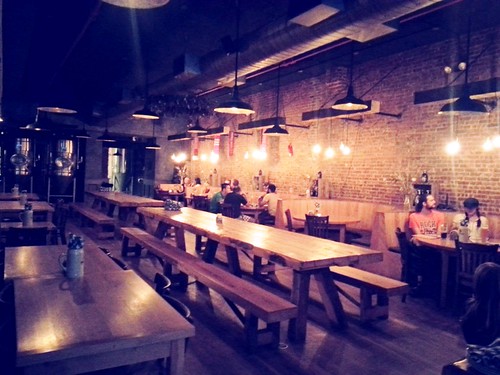 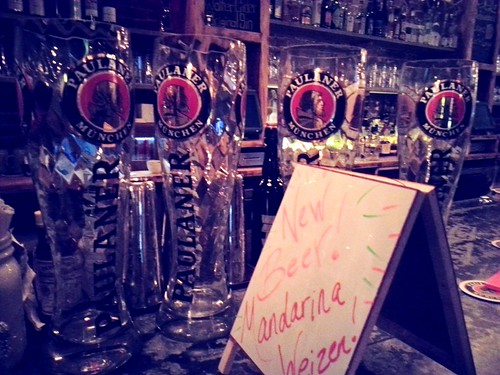 Upon entering we were greeted by the friendly staff and immediately liked the warm and rustic feel of the place. Paulaner’s Executive Chef Daniel Kill was born and raised in Bavaria, where his grandfather’s supreme cooking skills and passion for hospitality inspired him to become a chef. His granddad would be proud, as the food and service was exceptional. So, let’s dive in. 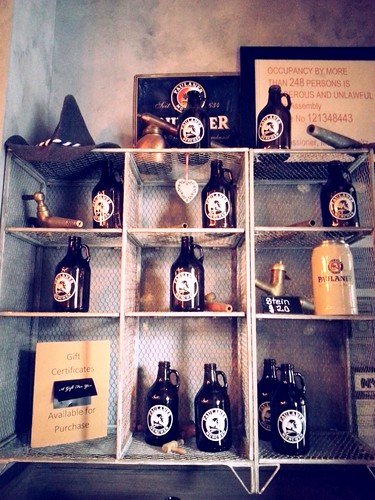 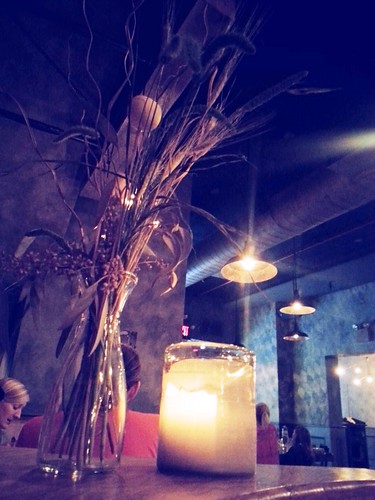 We started out with a beer flight (to the layman it’s a sampling of beers) of their five offerings, Hefeweizen, Munich Lager, Munich Dark, Munich Pale Ale, and their seasonal Summer Bock. A light beer kinda guy, my favorite was the Hefeweizen. Lightly hoppy with subtle bitterness balanced with fruity character it’s definitely worth a try. My girlfriend prefers things a bit darker, so the Munich Dark was her favorite.

All five were unique and good and any true beer connoisseur will surely find something to their liking here. Their beer is all brewed following the Purity Law of 1516: Master Brewer Andreas Heidenreich uses just four ingredients — water, wheat, hops and yeast. No spices, fruits or other enhancements are used.  There is no fresher beer than the unfiltered, unpasteurized “Tank to Table” brew, which is also available for takeaway in growlers and mini-kegs. 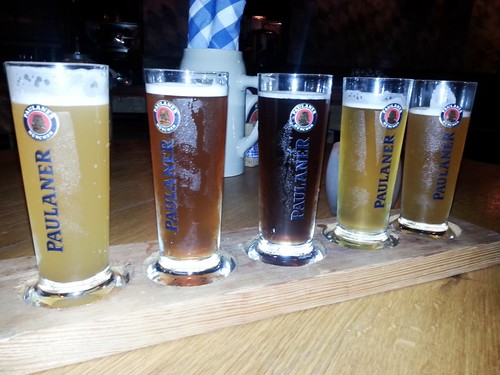 Now for some food. For starters we tried the Kremiger Weißbier – Obazda mit Brez’n, a warm pretzel with Bavarian Weißbier cheese and herb spread. Warning: once you’ve tried this you’ll never want a NYC street pretzel again, as they pale in comparison. We also had the Reiberdatschi mit Apfelmus (potato cakes with applesauce). Really tasty and went perfect together. 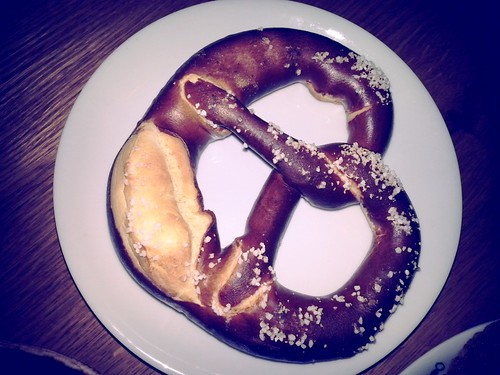 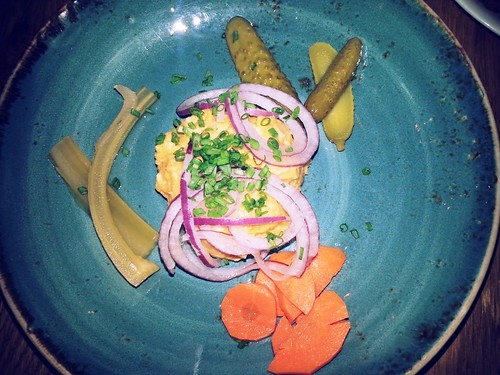 For our main courses we had the Zwiebelrostbraten (NY Strip steak with caramelized onions, spinach and fingerling potatoes) and the Die Paulaner Wurst, smoked sausage from dry-aged beef cooked in dark beer with cheddar cheese inside. The steak was cooked to perfection exactly as I asked for, raw and juicy. It’s one of the best steaks I’ve ever had at a restaurant. The smoked sausage was also excellent, with the cheddar cheese a great mix. 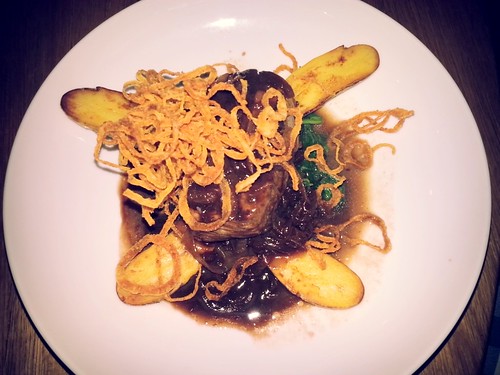 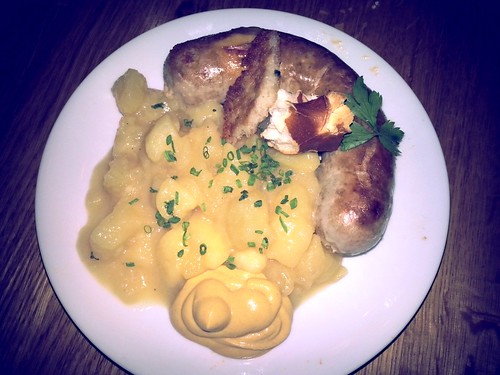 After taking a break and sharing one of their cocktails, their delicious signature Paulaner Punch (dark rum, fresh juices, cherry and ginger beer), we decided to murder our diets and order some desserts. I mean what German dinner is complete without some strudel? We ordered the Kirschstrudel, a cherry strudel with homemade (yes, homemade!) vanilla ice cream, and Feiner Schokoladenkuchen, Bavarian dark chocolate cake with whipped cream. 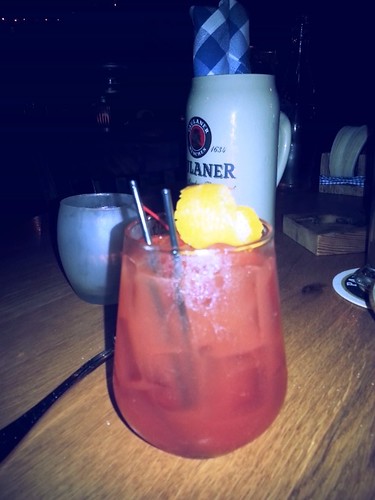 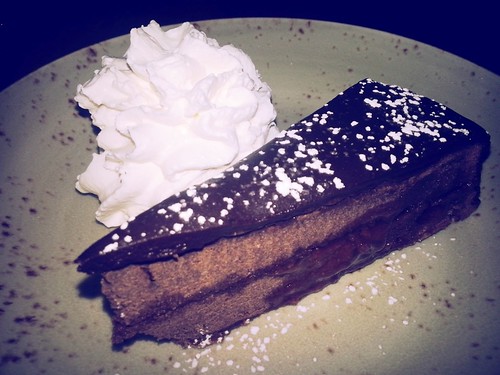 It was an excellent finish to an outstanding meal. I can’t wait for Oktoberfest as they have lots of fun things happening there, although I really just wanna go to see the hot dirndls!

As the executive chef of Paulaner, Chef Daniel marries traditional Bavarian cuisine with modern techniques and local ingredients. The food is wonderfully rustic, yet displays finesse and is plated in a lovely manner; it’s refined comfort food at its finest Chef Daniel was born and raised in Bavaria, where his grandfather’s supreme cooking skills and passion for hospitality inspired him to become a chef. He began taking cooking lessons at age 12 and soon moved on to apprenticing at restaurants and hotels in Germany. Chef Daniel got his big break in the year 2000 when he earned a chef position at the two-Michelin starred Munich, Germany restaurant Tantris, working directly for Executive Chef Hans Haas. He gained valuable experience introducing new menu concepts, planning large private parties and training the staff.

Chef Daniel had developed both strong personal and professional roots in Germany, but in 2008 he decided to experience the restaurant scene in the States. He landed the prestigious position of chef de cuisine at the Michelin-starred Wallse Restaurant in Manhattan. He ultimately took on the position of executive chef of the entire KG-NY restaurant group, overseeing five New York-based Austrian restaurants, including Wallse, The Upholstery Store, Café Kristall, Café Sabarsky and Blaue Gans before joining Paulaner.

Paulaner is home to two customized copper and steel fermentation tanks (total capacity 10 hectoliters) imported from the legendary Paulaner Brewery in Germany. These tanks are where Master Brewer Andreas Heidenreich, who has crafted beer at Paulaner Brewery branches all over the world, holds court, creating a rotating line-up of unfiltered and unpasteurized beer, just like what’s made at the nearly 400-year-old Munich brewery. The beer that Heidenreich prepares at Paulaner is truly “Tank to Table”, as after the on-site aging process (about two to three weeks) the beer goes directly into the dispensing tanks without any filtering in between, allowing for optimum freshness and flavor. This makes Paulaner’s beer vastly different from most of the brews sold in the United States, which are filtered and pasteurized.

While he adheres to traditional techniques, Heidenreich does not fear experimentation. He prepares distinct, seasonal beers with his own recipes, such as a West Coast-style IPA made with hops from Washington State and a bottom-fermented beer featuring two varieties of German aroma hops.

Heidenreich’s beer menu exemplifies the German native’s storied, 20-year career in the beer industry. He apprenticed at a Paulaner brewery as a teenager and later attended the Berlin Technical University to study ‘Brewing Technology’ and become a certified Master Brewer. He went on to oversee Paulaner microbreweries throughout Asia before moving to New York City to become the master brewer at Paulaner in Manhattan.

Chef Wolfgang Ban brings over a decade of experience and training to his work in the culinary arts and is a firm believer that the foundation for modern cuisine should have its roots in a comprehensive understanding of tradition. Hailing originally from Vienna, Wolfgang has spent the past fourteen years in New York City as executive chef for the Austrian ambassador to the United Nations and as executive chef for the restaurant located in the German Mission to the United Nations.

He is responsible for all aspects of catering, special events and restaurant operations, and regularly serves a discriminating clientele of high-level diplomats and heads of state, including Secretary-General Kofi Annan and German Foreign Minister Joschka Fischer.

Along with his culinary school roommate and business partner, Eduard Frauneder, Wolfgang opened Seasonal Restaurant & Weinbar in October 2008. Bringing contemporary Austrian cuisine to a new level, Seasonal was awarded a Michelin Star and 25 food points from Zagat Guide in 2010 & 2011 and was named one of New York Magazine’s “Best New Restaurants” of 2010.

In December 2010, Eduard and Wolfgang opened their second restaurant, Edi & the Wolf, in New York City’s East Village. Inspired by “Heurigers,” the casual, neighborhood taverns popular in Ban and Frauneder’s native Austria, Edi & the Wolf offers a succinct and composed menu of rustic Austrian cuisine in a casual space.