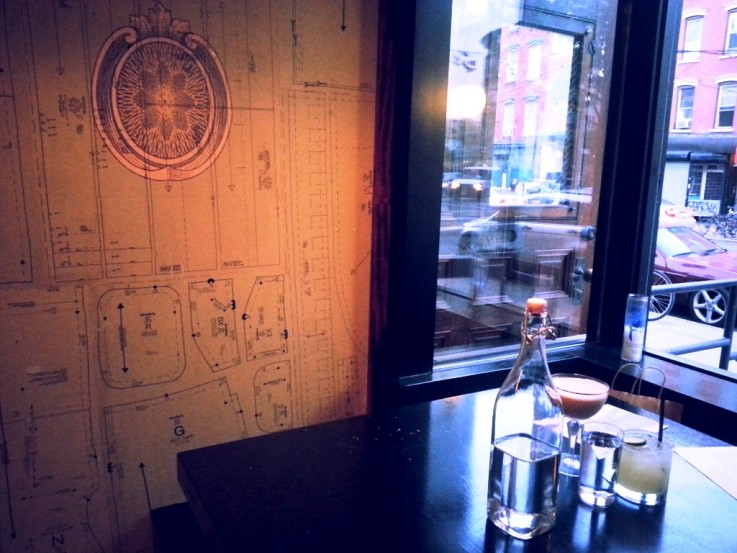 As a writer for Socially Superlative I have the pleasure of visiting restaurants both new and old in this crazy smorgasbord we call New York. Most are great, but some stand out. The newly opened Federal Bar in Williamsburg is one of them. Just shy of two months old, this place is gonna get really popular really quick. 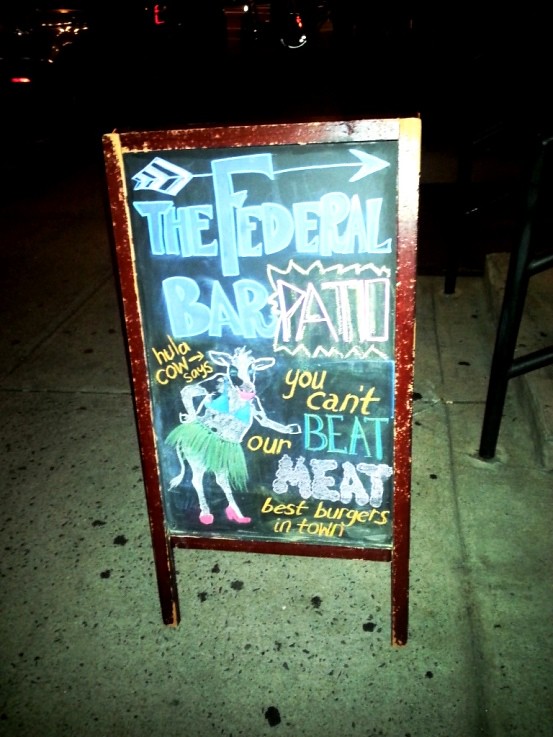 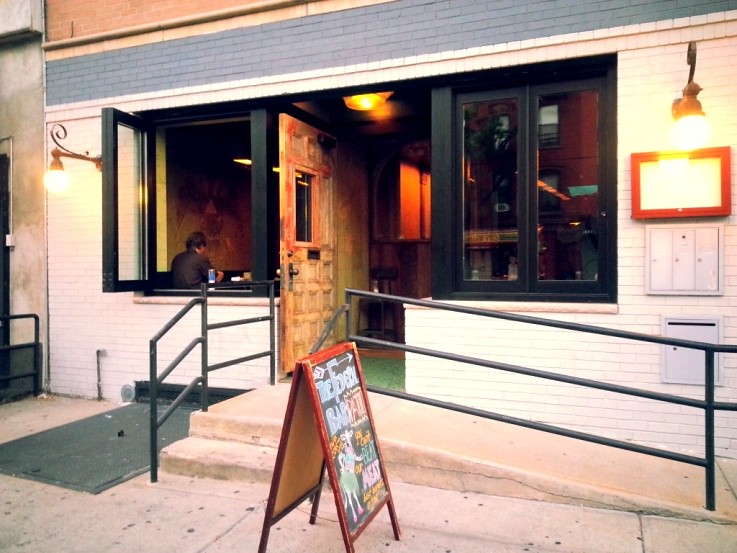 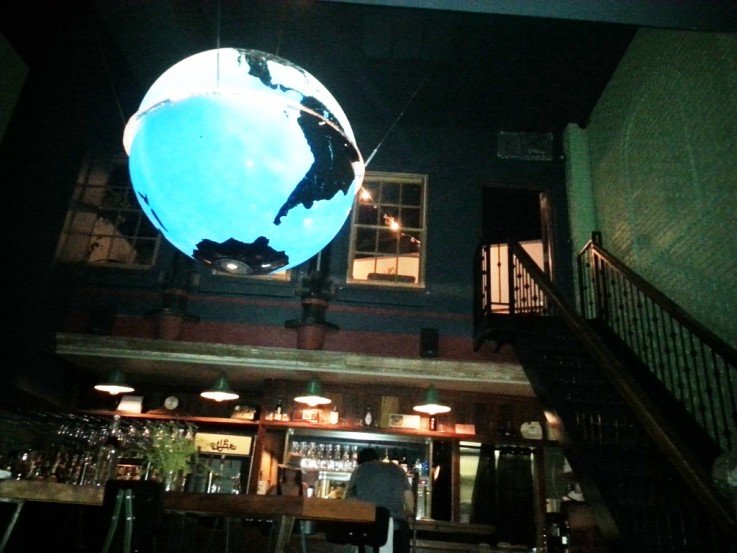 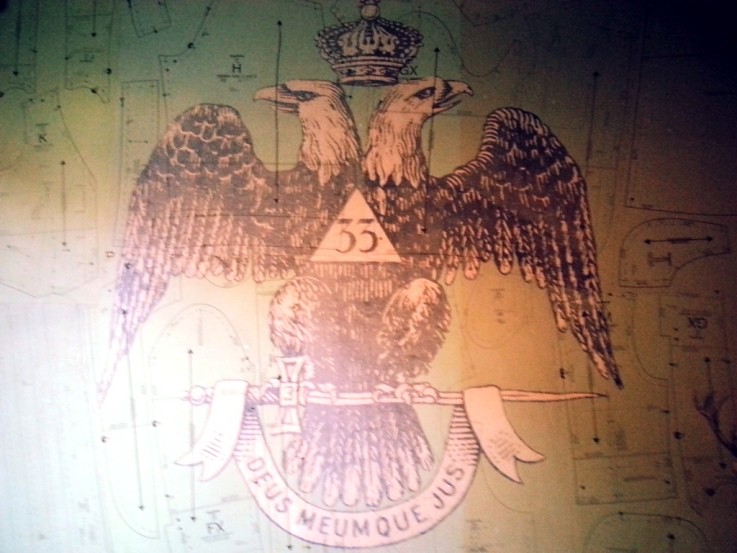 Owned by the iconic music company Knitting Factory Entertainment (which is right next door) and one of three Federal Bars around the country, this one has a distinct Brooklyn flair, specializing in hyper-local beer and locally sourced food. Speaking of food, lets get down to it…   We started with some cocktails made by bartender extraordinaire, Abbra Sherp. The Infidelity with high-proof rye, tart Cherry Herring liquor, lemon juice, Mezcal Simple, and an egg, was excellent, having a smooth and buttery texture. So was The Autumn, made with vodka, Saint Germain, cucumber, pineapple and lime. 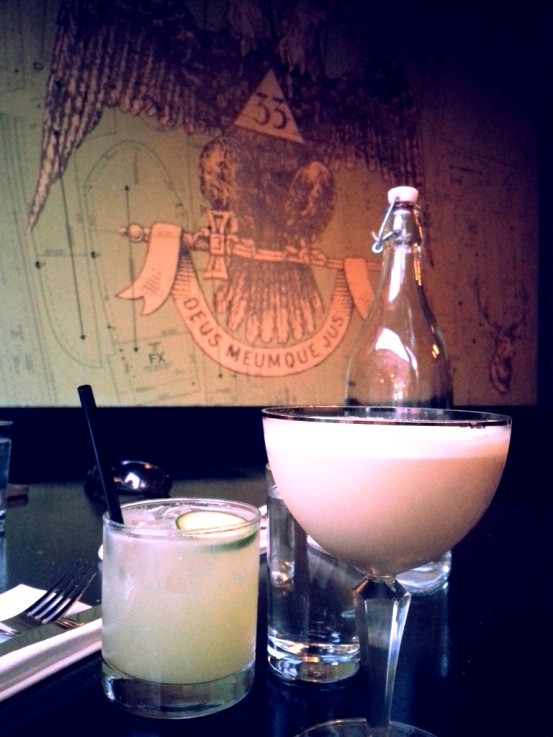 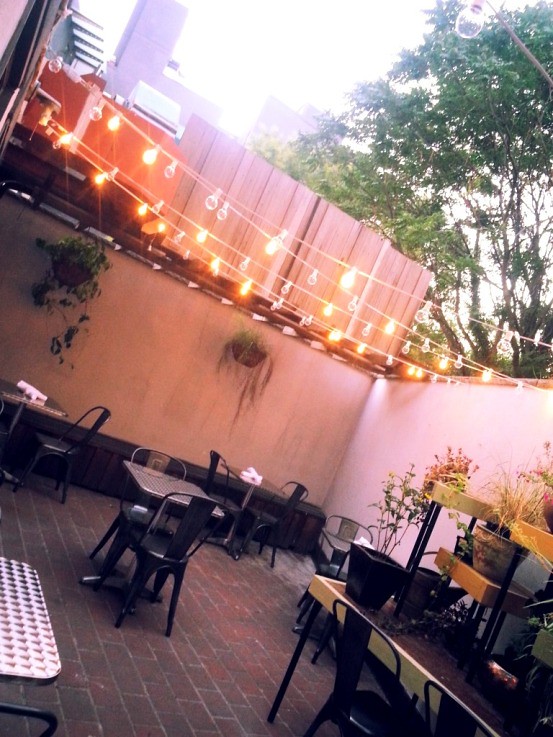 To begin our feast we tried the Beef Heart Poutine and Lamb Merquez Corndogs. While the beef hearts were simply delicious, the corndogs stole the show. I’ll honestly never be able to eat a corndog at the State Fair again. You’ve gotta try them. They come as a plate of three and my girlfriend and I were nearly fighting over who got the last one (of course she won, as usual). 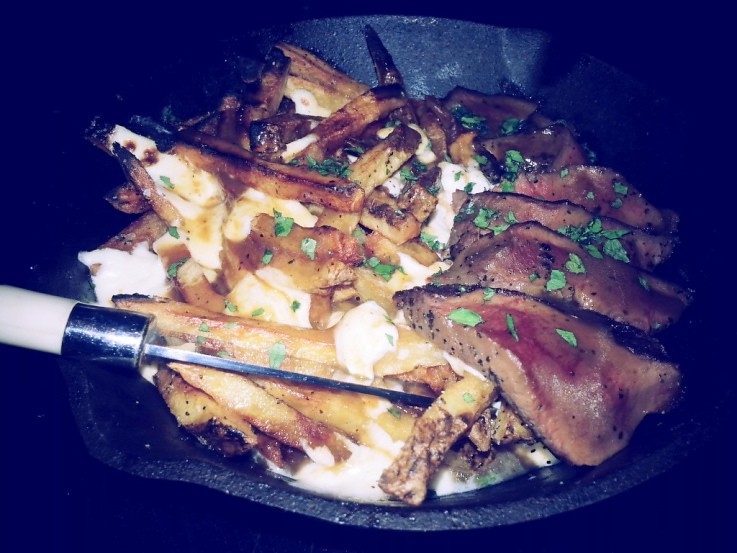 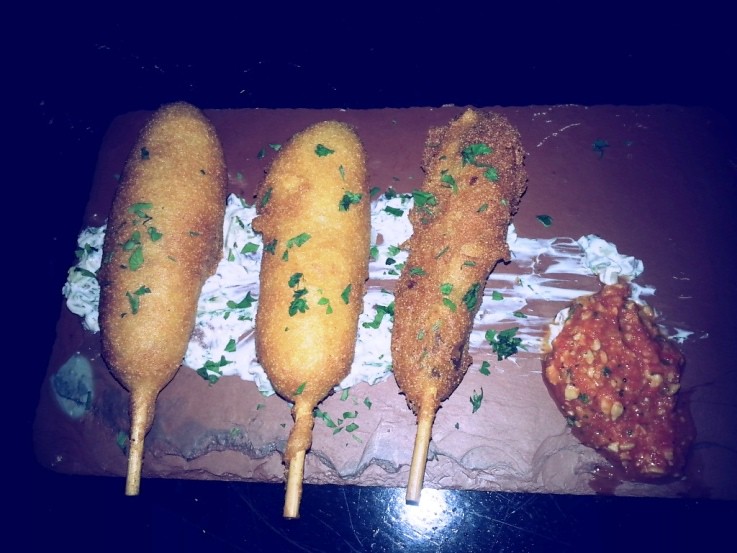 For the little vegetarian in us we ordered the Collard Greens and Farro salad. With watermelon, fennel, Ricotta salada, pomegranate and sunflower seeds and citronette, it was the perfect accompaniment to our main meals of a Blackened Red Snapper and Roasted Turkey Leg.

The Snapper was a-snappin’, served with a collard green salad with fresh herbs, Heirloom cherry tomatoes, fennel, pickled watermelon rind and South Carolina peaches that were hand-picked by Executive Chef Brendon Doyle himself from his recent trip down south, all dressed in a fine jalapeño lime citronette.

The Roasted Turkey Leg looked like something out of a Renaissance Fair, the only thing missing being the big breasted wench serving it. So big was the turkey leg that we couldn’t finish it even together, and that means it was big. I can stuff a lotta food into my ever-expanding gullet. 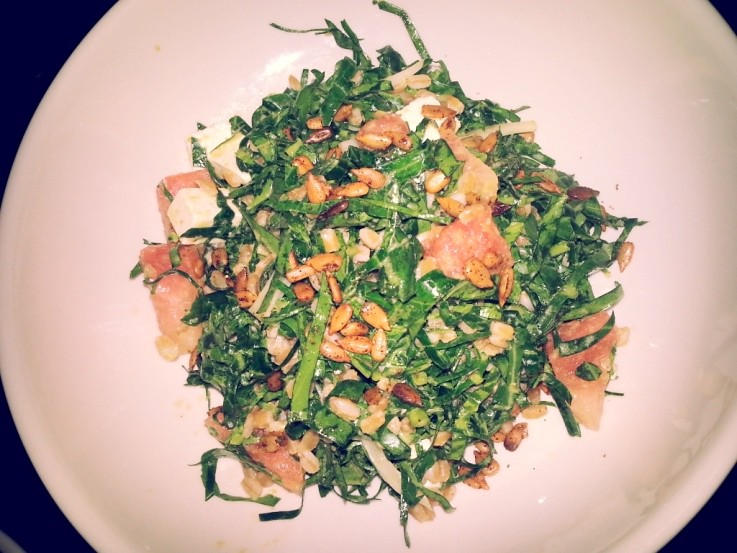 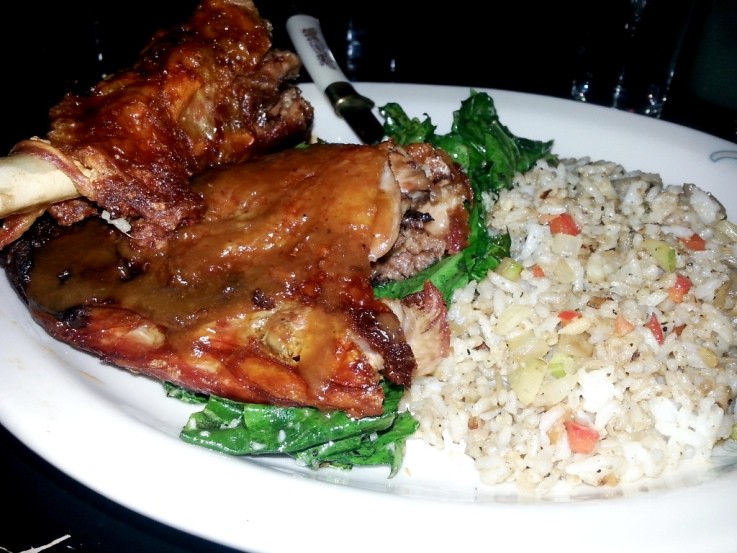 We ordered two more cocktails, the Bitter Bitch and the Green Mile, from our exceptional host and server Elijah, and were gonna call it a night until he told us about their specially made dessert of the evening, it being a pineapple upside-down doughnut cake. Huh? Yeah, that’s what I said. It’s a bread n’butter pudding made with Peter Pan donuts, topped with a pineapple glaze à la pineapple upside-down cake.  Thanks a lot Elijah for busting my waist yet again. 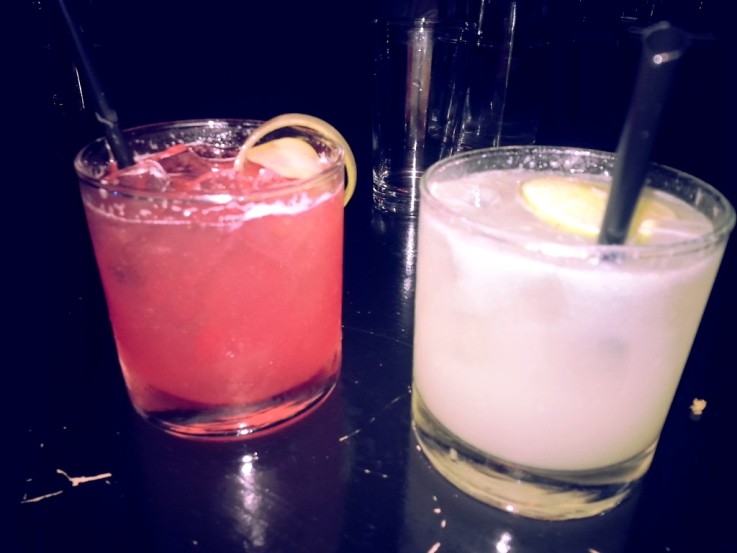 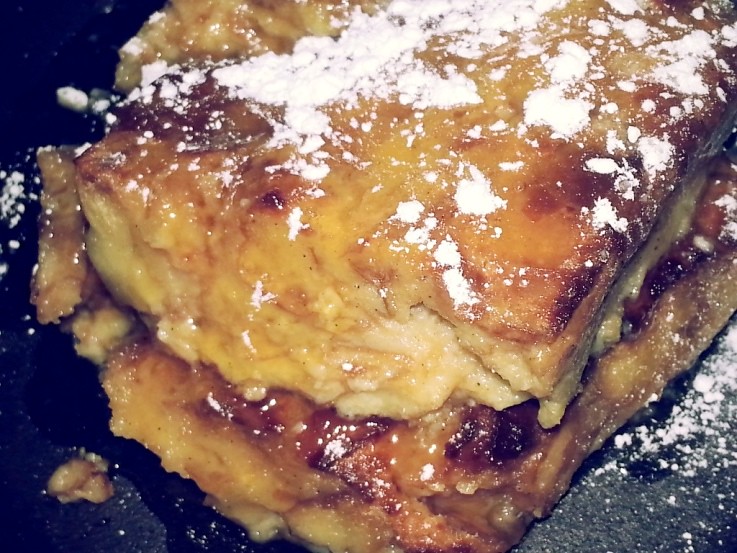 We had a great time at this latest addition to the ever-expanding Williamsburg food scene.  You will too.  Now, let’s go next door and listen to some music.

About The Federal Bar:

The Federal Bar Brooklyn is housed in an early 20th century carriage house in the heart of Williamsburg. Like its companion restaurants, The Federal Bar North Hollywood and The Federal Bar Long Beach, The Fed BK is a relaxed and inviting restaurant and bar offering a menu featuring a unique take on traditional home cooking through locally sourced ingredients.

Hailing from Denver Colorado, Chef Brendon Doyle has spent his life in a kitchen. At a young age he spent a lot of time cooking with his Mother in his childhood home, learning not just how to create a good meal but for the role food plays in bringing people together.

His first job at 15 was as a dishwasher and eventually cooking in the restaurant at the golf club his Father operated. Igniting his passion for cooking and working in kitchens Brendon attended culinary school after high school. Though he was in school, Brendon, gained most his knowledge working in some of Denver’s best French and Italian destinations. Achieving his first Executive Chef position at the age of 24, Chef Doyle, spent the next handful of years at the helm of some highly praised restaurants in Denver.

Upon moving to New York in 2013, Brendon, worked as Chef at Dale Talde’s well known bar and eatery Pork Slope. Departing to develop his own company, Guerrilla Condiment Company, and cook in the private sector, working with Chef Andrew Gerson at Brooklyn Brewery and doing private events for the renowned Humboldt and Jackson American Tasting Room.