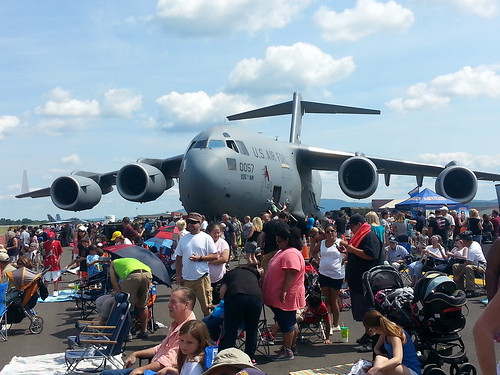 Who doesn’t wanna fly jets? Find me one red-blooded American boy that’s never dreamed of roaring across the sky in a F-22 Raptor and I’ll find you Bigfoot. Yeah, impossible. But we can’t all be Mavericks like Tom Cruise in Top Gun. But you can go see the big birds fly at the New York Air Show at Stewart International Airport!

My girlfriend and I had the opportunity to cover the event. It was our first air show, and it was AWESOME!! 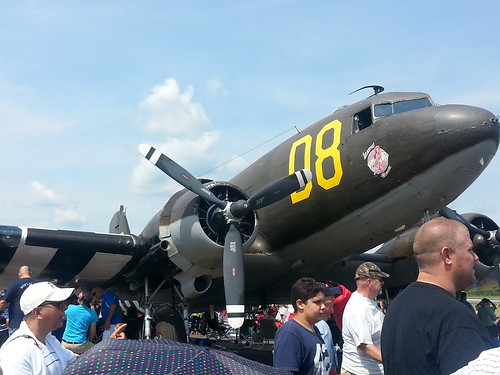 Knowing hardly anything at all about planes wasn’t a hindrance, as there were friendly pilots and other staff outside of all the aircraft waiting to answer any questions. And they got a lot of them. “How fast does she go?” and “Has this jet seen any active combat?” were two of mine. Well, let me tell you they go pretty damn fast, and a few had been retired from active duty. 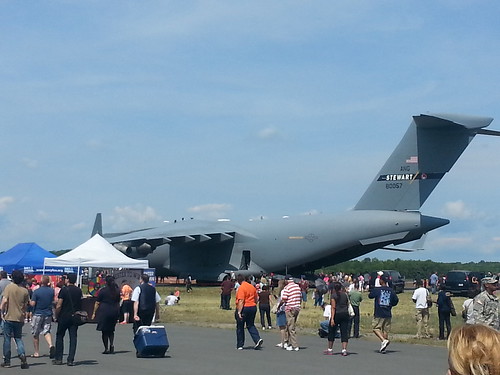 There were feature demonstrations from four of the five branches of the US Military including the Marine Corps’ Harrier Jet, the Air Force’s F-22 Raptor, the Navy’s F-18F Super Hornet and the Navy Seals Leap Frogs as well as the Army’s West Point Parachute Team. There were also several civilian aircraft demonstrations including the Horsemen, a three ship P-51 formation flight team, the GEICO Skytypers, a six aircraft World War II era flight team and former National Aerobatic champion Mike Wiskus in the Lucas Oil Pitts. My favorite was Mike Wiskus in Pitts. It was simply unbelievable what we saw, with our mouths hanging open at every twist, turn, and stall he did.       Some of the many aircraft that were on display in the airfield included:

There was also the chance to have a personal flight in ‘Panchito‘, a B-52 bomber from World War II owned by pilot Larry Kelley. This year marks the 70th anniversary of the end of WWII. “Flying in a B-25 will take you back to World War II as you imagine all the brave men who flew those bombing missions over every theater of the war,” said Bryan Lilley, President of the New York Air Show. 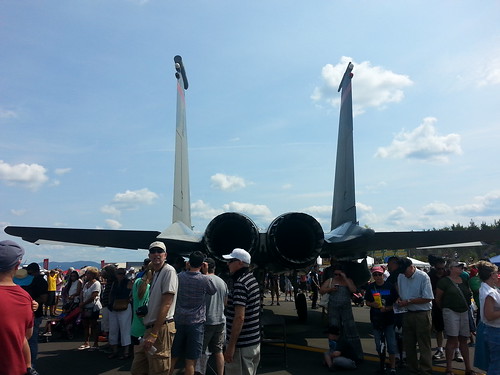 It was great to see so many families with their kids at the show. I’d bet my bank account that some of them will go on to be Aces in the sky, flying with the world’s best Air Force defending our freedom. We’re glad we went to the Air Show. It was quite a day, and we’re damn proud to be Americans! 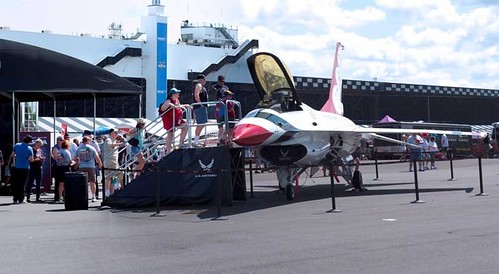 I’d like to dedicate this post to Andrew Wright, of Austin Texas, a fallen aviator who died in a tragic accident on August 28th while preparing for the Air Show in his 1998 Giles G-202 stunt plane. RIP Andrew.

Photos via the New York Air Show and by Socially Superlative