The Next Billion: New York, A Forum On The Connected World 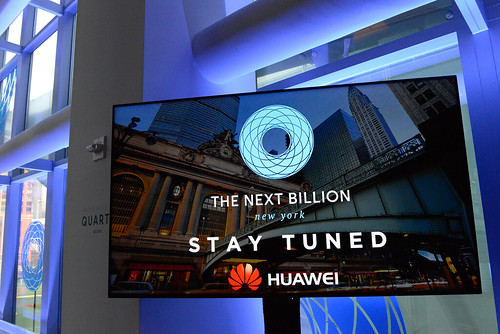 The Forum, spearheaded by Quartz (qz.com), explored the impact of internet connectivity on society, politics, technology, education, commerce, and finance. “The Next Billion” refers to the expected doubling of the internet-connected population, coming mostly from mobile devices in emerging markets.  Quartz was launched in 2012 as a digitally native news brand for an emerging class of mobile, social, post-national global executives who need to understand the impact of events in far-flung places. More than 500 attendees joined Quartz at the event and another 150,000 from more than 190 countries tuned in on the livestream. The event hashtag (#qznextbillion) trended in the US on Twitter. 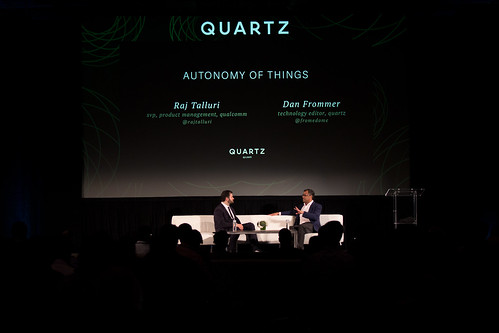 I crossed West Street to arrive at the Forum’s venue, the beautiful Conrad Hotel located in the new southern Manhattan neighborhood abutting the Hudson.  I entered a world consisting of a day-long array of cutting edge engaging speakers eager to harness burgeoning connectivity to improve people’s lives. It struck me that very brilliant and creative people were seeing a need and using technological ingenuity to fill it. I entered the Conrad ballroom just as Glenn Lurie, the President and CEO of AT&T Mobility, was explaining that in the age of the Internet of Things everything will be connected. “Everything” will mean connectivity between businesses, cars, health and fitness, and homes. With the hope that smart cities talking to self-driving cars will ultimately make crossing West Street easier, let me tell you how I connected to “The Next Billion”. 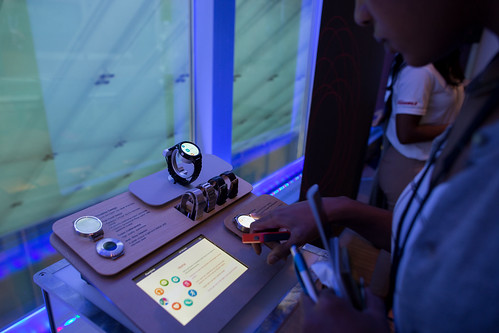 Catherine Hoke, the founder and CEO of Defy Ventures, an initiative which uses internet access to improve released prisoners’ lives, was the highlight of the event. While the male speakers used tech nerd savvy professional voices, Hoke talked about humanizing former prisoners in personal risk taking ways which humanized herself. After describing the prisoners’ lives by asking “what is it like if you are only known for the worst thing you have ever done?,” she described the worst thing she had ever done. (She committed a sexual transgression with a prisoner.) Hoke was able to re-build her life via helping former prisoners who need to re-build their lives. Defy Ventures teaches people who have never had internet access to use connectivity to become entrepreneurs.   She brought a real live transformed human to the stage: Coss Marte, who formerly made two million dollars as a drug runner and now leads a crime free life running an exercise facility franchise. Hoke’s story and endeavors were poignant to the extent that they brought tears to my eyes. 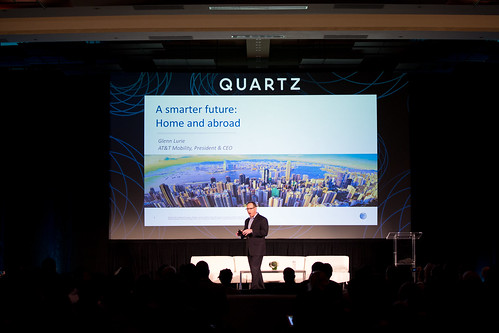 I interviewed James Parr of Open Space Agency who invented the Ultrascope (which analyzes asteroids).  He explained that there are not enough telescopes in the southern and eastern hemispheres. He said that by combining robotics and smart phones, hundreds of scopes could be perusing the skies. When I told Parr that this sounds to me like crowd sourcing to save humanity from the fate of the dinosaurs, he said that I was right on target. 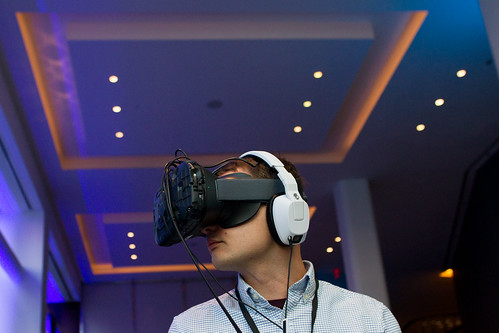 It was a special pleasure to hear former Presidential candidate and Harvard Law Professor Lawrence Lessig. Lessig, a very animated speaker, said that “there is a hole where there should be a Congress.” He quoted bygone New York politician Boss Tweed who said “I don’t care who does the electing as long as I do the nominating.” I with that I had the power to nominate Lessig. His point that the internet is a Janus device which could be harnessed to fix the broken American Congress is a much needed idea. 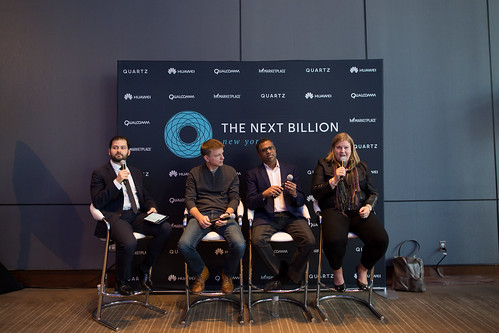 Here are examples of other speakers who have ideas about using the internet to solve problems and fix things:

Chris Sheldrick, cofounder and CEO of what3words, invented a way to use the internet to enable people who lack addresses to be located. As someone who gets lost in Brooklyn, I applaud his effort.

Luis Von Ahn, cofounder and CEO of Duolingo, uses the internet to focus on language teaching. He wants to mitigate against poverty by providing everyone with internet language education access.

Nonny De La Pena, founder of Emblematic Group, uses virtual reality technology to generate empathy. She re-created the experiences of an undocumented immigrant who was tasered to death and a man who died from diabetic coma because a food bank was unable to accommodate all of the people standing on line.

Dilip Ratha, a World Bank economist, uses mobile phones to reduce remittance costs for people who wish to send money. He created a non-profit remittance platform available to all which saves billions of dollars. “It is not cheap to be poor. What a shame,” he said. 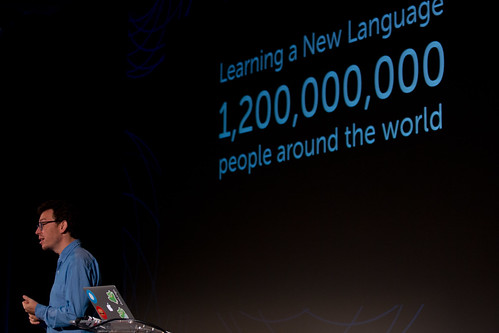 I enjoyed special activations and displays by Qualcomm (the Inventor Lab and James Parr’s Ultrascope), Emblematic (virtual reality demonstrations) and Huawei (a charging lounge featuring their watches, tablets, and phones), and the food and drink catered by Danny Meyer’s Union Square Events.   Meyer’s lunches–consisting of seared tuna, cauliflower steak, and garden variety cow steak choices–were absolutely scrumptious. And the ginger snap and chocolate hazelnut cookies provided during the afternoon break were to die for. So yes I took a few extra cookies home and I am chomping on them now. But at least this transgression will not make me a candidate for Hoke’s Defy Ventures! Can the internet somehow defy calories? 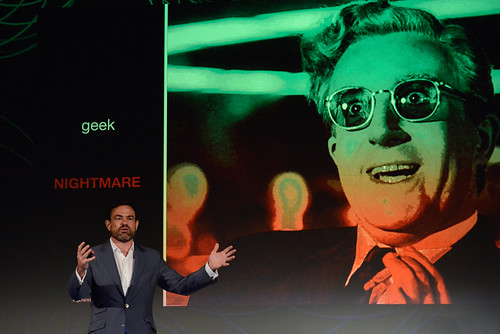 When it was time to re-cross West Street at the end of the day, I was sad that I did not closely encounter self-driving cars.  But they will be here soon. Ditto for more ideas about how to use connectivity to do good for the next billion. Although the Singularity (the connection between humans and machines) has not yet occurred, we do inhabit a brave new connected world. I noticed that the program said “self-identified” next to “women’s restroom and men’s restroom. When ya gotta go ya gotta go.   The Forum shows that we are all going into the future connected together and oozing with the juxtaposition of technology and benevolence. 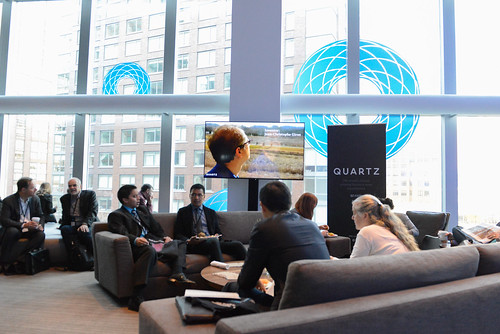 “If you don’t devote part of your heart to solving the problem, all of your achievements get wiped away,” said Lessig. Not so for humanity. The gleaming spanking new Conrad Hotel stands in the place of Hurricane Sandy and 9/11 devastation. We will successfully use internet connectivity to build a positive future and fix what is broken.

Inspired to start getting your own idea out there? Check out https://www.jpost.com/special-content/get-your-invention-off-the-ground-with-the-support-of-inventhelp-624132 and learn how to launch your great ideas!