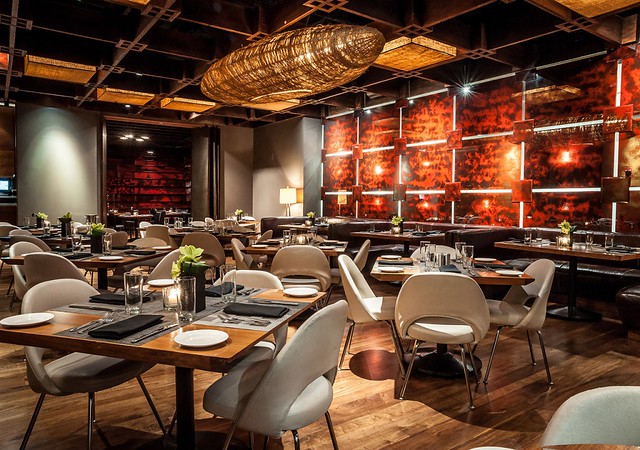 I’m a Theater Junkie, having grown up as the child of parents that traveled the country performing in shows from small Summer stock plays to big Broadway productions. I live just minutes from Times Square in Hell’s Kitchen and am constantly seeing shows with my girlfriend, another theater lover. Being underappreciated and overworked 9-to-5-ers, we are always looking for a nearby restaurant to dine at before the show. We have our favorite places in Hell’s Kitchen but recently we decided to check out Blue Fin, a sushi and seafood restaurant located in the swanky W Hotel Times Square.

We love sushi and don’t treat ourselves that often because we aren’t Rockefellers. We found that the prices at Blue Fin  are reasonable, especially for being located in Times Square. We started off with two cocktails to whet our appetites, a Szechuan Sour, which is Langley No. 8 Gin, Yuzu & Kaffir Lime Leaf, Szechuan Peppercorn, and a Cranberry Shrub, Old Forester Bourbon, Housemade Cranberry Shrub, Maple Syrup. We liked both but the Cranberry Shrub was Amazing! 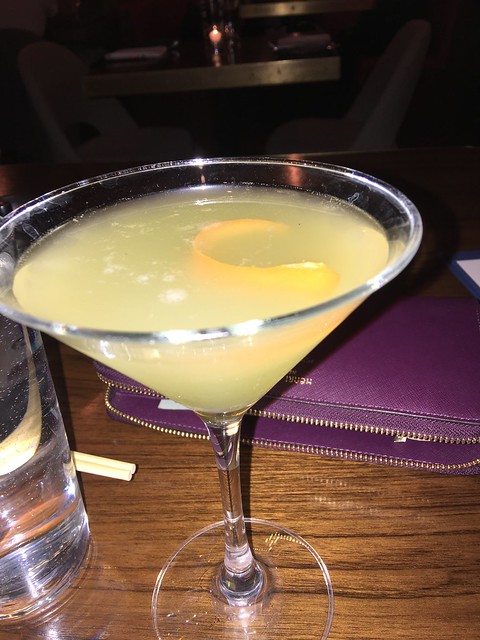 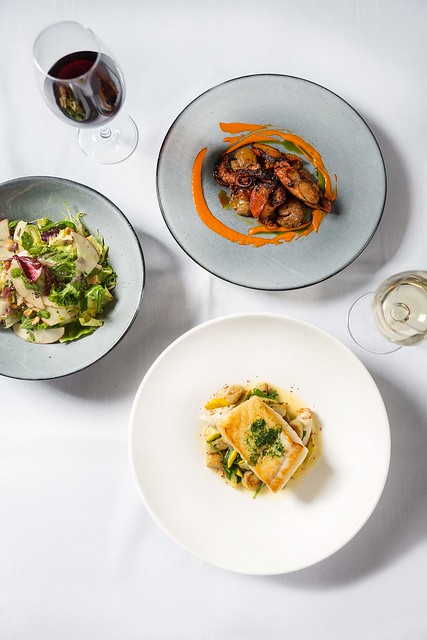 For appetizers we ordered the Times Square Sushi Roll made with crab, spicy hamachi, mango, avocado and yuzu-miso, as well as the 3 East, 3 West Oysters. The Times Square roll was one of the best sushi rolls we’ve ever had, so fresh and tasty it literally melts in your mouth. You need to run to Blue Fin right now to get one!! The oysters were golden too. Make sure you add some of the delicious holy schmitt’s horseradish to them. 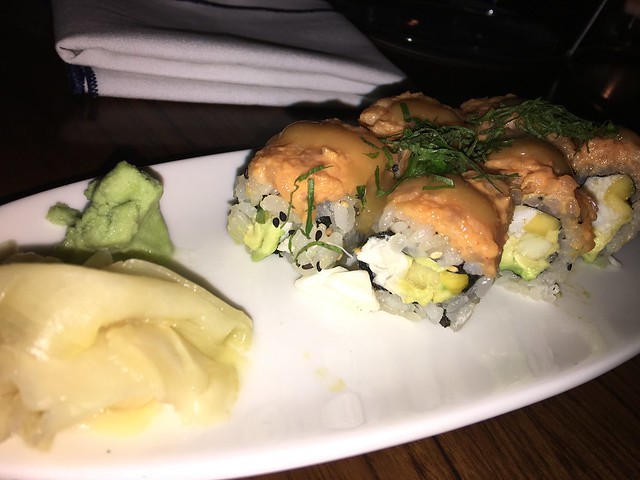 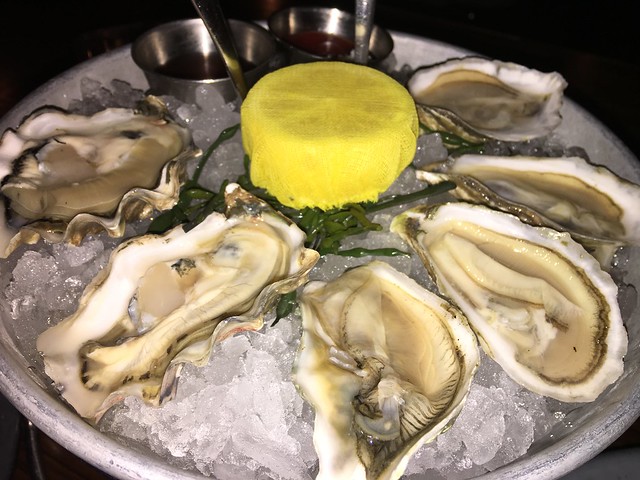 For the main courses we decided on the Thai Seafood Hot Pot with lobster, shrimp, calamari, littlenecks, mussels and kaffir lime leaf, and the Chef Boo’s Chirashi Bowl that had salmon, tuna, hamachi, shrimp, BBQ eel, avocado, ikura and sushi rice. Both dishes were recommended to us by our ultra friendly server. Basically it was like swimming in the ocean with a fork, and it seemed like we had just about every sea creature on our plate. Each one with a distinctly delicious taste; the only thing missing was Ariel. If you’re a seafood lover you need to try both of these dishes. We weren’t disappointed and you won’t be either. 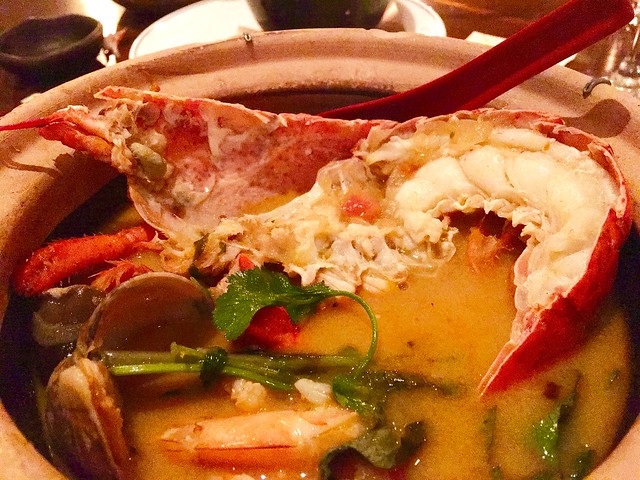 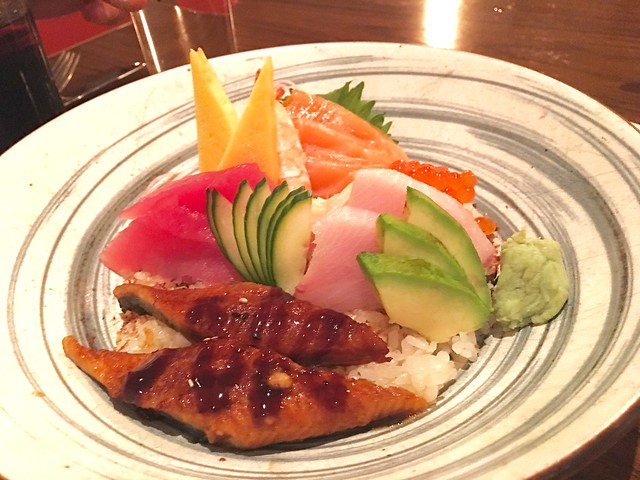 After devouring a small aquarium full of seafood, we took a small break to unlatch our belts and stretch our stomachs to try and get in a dessert which was again recommended to us by our waiter. The Chocolate Raspberry Molten Cake with vanilla ice cream was decadent and delectable, the perfect way to end our feast. To wake up from our approaching food comas we both got espressos so we wouldn’t fall asleep on each other at the theater. After our meal we went to see In Transit, which I very highly recommend. 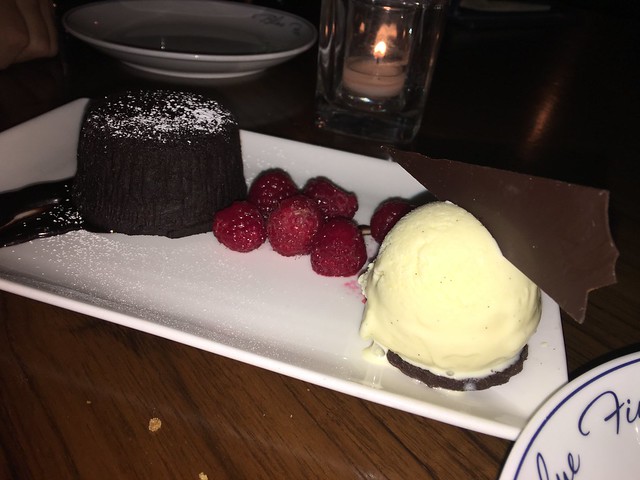 We will most definitely be returning to Blue Fin for our next pre-theater dinner! 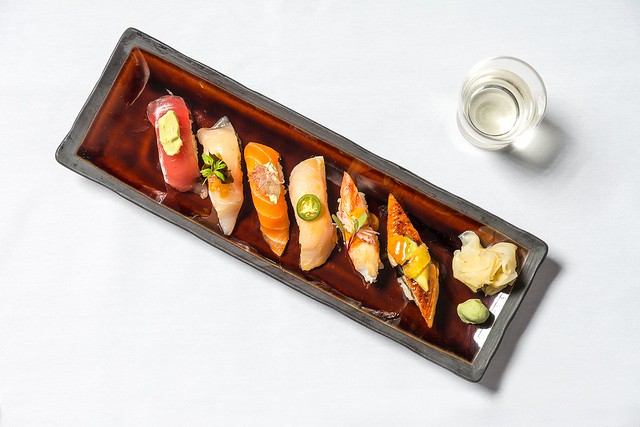