Every true New Yorker knows the most famous ape in history: whether you are 15 or 80 years old, you know who King Kong is. From his first onscreen appearance in 1933 alongside screen legends Fay Wray and Robert Armstrong to the latest current Blockbuster Kong: Skull Island, this great ape has been entertaining us for nearly 85 years.

What you might not know are some of the less well known primates in Hollywood. That’s where comedian extraordinaire Kevin Maher comes in. No, he’s not Bill’s younger brother. He’s a writer-comedian that hosts a monthly video variety show at the Nitehawk Cinema in Williamsburg called Kevin Geeks Out. 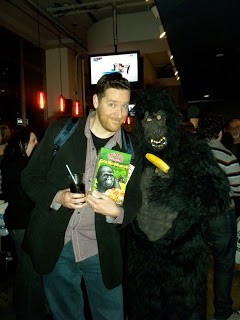 It’s a confabulation of obscure film clips, offbeat commentary, guest experts, games and curiosities. To geek out with Kevin you don’t have to be a geek, just a pop culture adventurer. To date, Kevin has geeked out with over 30 different installments of his variety night, dedicating a full evening to a specific topic, such as Bigfoot, Robots, Zombies, KISS, Wrestling and Batman! His previous guests include writers from The Daily Show, award-winning cartoonists, scientists, comic book writers, film scholars, screenwriters, novelists, bloggers, a clown, a psychic, and even Santa Claus!

This month’s 2-hour show is called ‘Monkey Madness‘. It includes some off the wall zany stuff including Gorillas vs. Nazis, Women who participate in forbidden monkey love, Chimps in Horror Movies, a defense of Tim Burton’s Planet of the Apes, and a retrospective on Kong sequels (authorized and unofficial), plus the use of monkeys in art-house cinema and propaganda films, and much more…

Come join the fun and see why Kevin Geeks Out has been called “TED Talks for Midnight Movies” (DailyGrindhouse), as Kevin and his guests go Ape talking and laughing about the screwball antics of Monkey Cinema!

The evening includes all kinds of cash-grab films, including the best, the worst, the weirdest and the most shameless. Afterwards they host an afterparty downstairs at Nitehawk’s bar, Lo-Res.

If you haven’t been to the Nitehawk yet you need to get out there and check it out. It’s one of my favorite filmhouses in the 5-boroughs. Similar to the Alamo Drafthouse Cinema started in Austin, Texas, you can order drinks and food from a full service menu. I don’t mean just Pepsi and Popcorn either. We’re talking designer cocktails and craft beer from some excellent local breweries. You simply place your order from your table (yes, every two seats have a table) and in a jiffy your order will be taken and filled. This ain’t no normal movie theater guys. It takes dinner and a movie to the next level. I wonder how many first dates have been taken here? The Nitehawk hosts many different film series to suit even the most obscure film connoisseurs taste.

We Changed the Law:

Setting a historical precedent, Nitehawk Cinema is single-handedly responsible for the groundbreaking overturn of the prohibition-era New York State liquor law that made serving alcohol in motion picture theaters illegal. Nitehawk celebrated Gov. Andrew Cuomo’s signing the new law allowing moviegoers to enjoy an adult beverage at their theater seats a mere three months after the Cinema’s opening date. And thus, a new era of boozy film viewing in Brooklyn (and beyond) began!