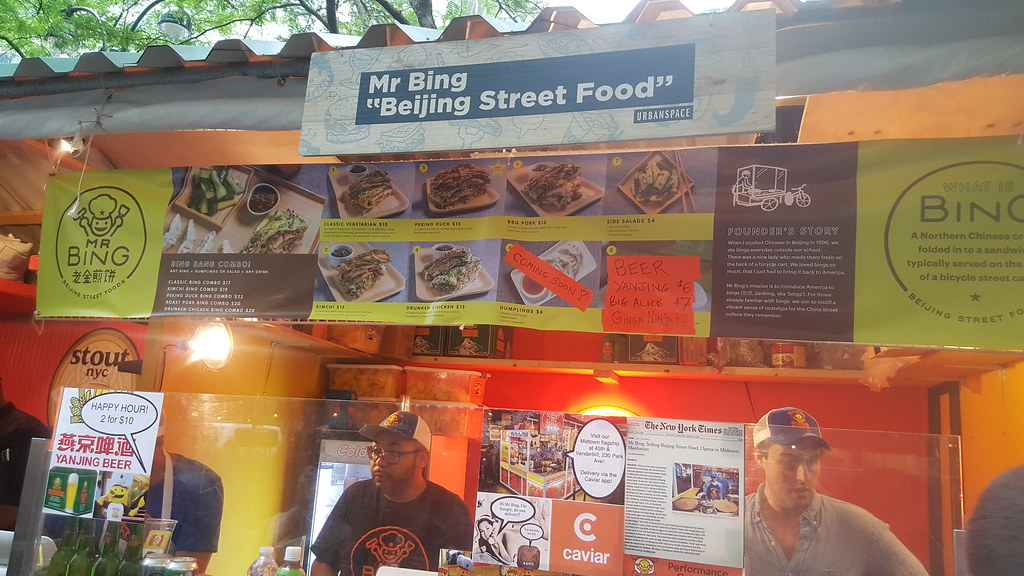 My husband and I went to check out Broadway Bites at Greeley Square between 32nd and 34th Streets, currently running through July 14th. It is another wonderful pop up triangle of food vendors and it is definitely AWESOME!

There is some seating within the space, they allow alcohol within certain sections, and it is a perfect central location for a bite to eat either at lunch or after work.

This is put on by Urbanspace and they do a few of these around the city throughout the summer.  They had put on Madison Square Eats, which has since finished up, but also Urbanspace Garment District runs from June 6th through July 19th and you’ll be hearing about a third pop-up from us soon enough.

The vendor list at Broadway Bites was extensive, over 30 different food and drink vendors, and we had a wonderful dinner recently plus leftovers. I want to highlight some of our favorites at the “triangle” and I urge you to stop by before it closes on July 14th. 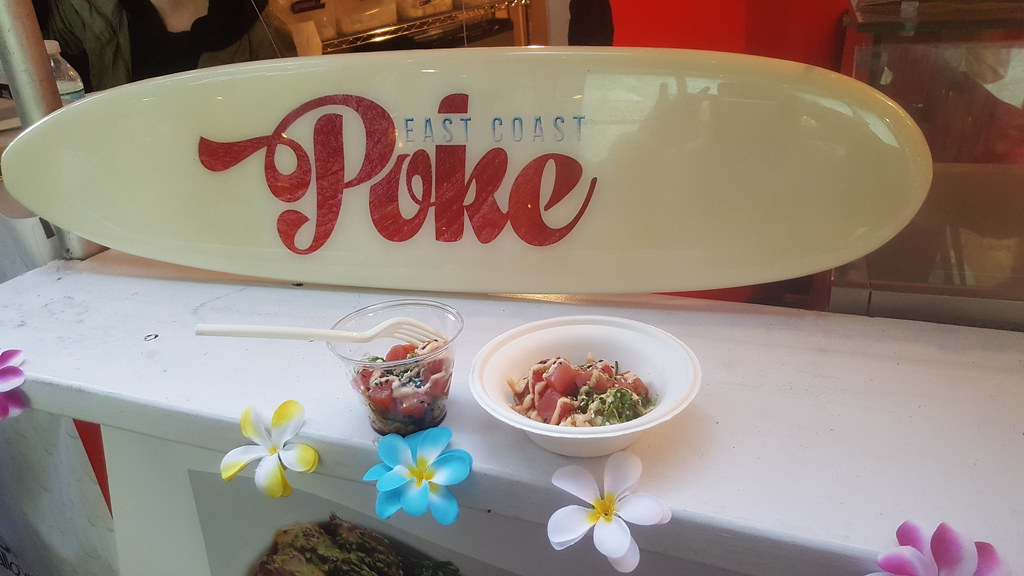 Their Ahi Tuna was some of the best fish had in ages and the sauce and toppings complemented very well, a definite stand-out and one not to miss. 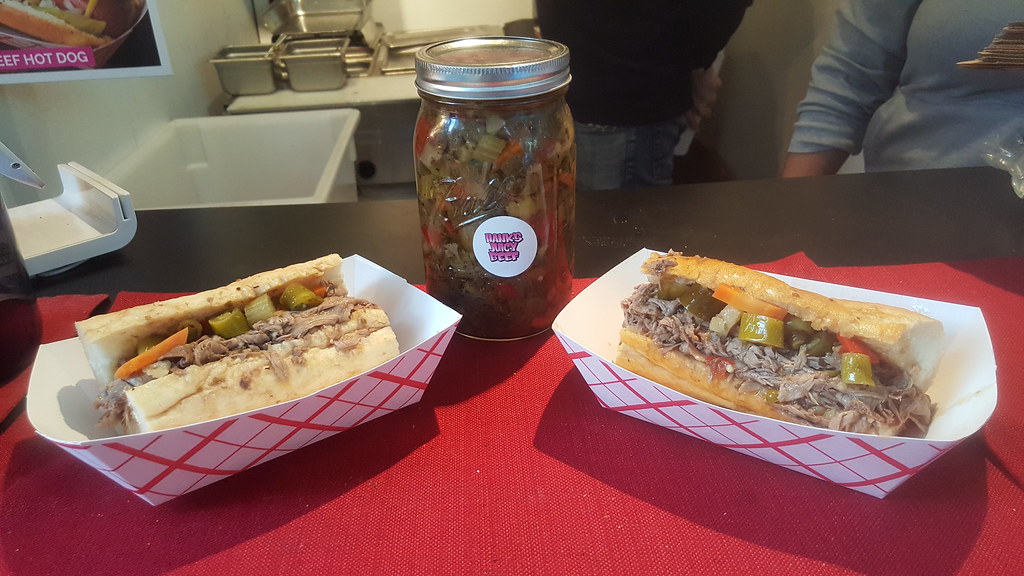 One of the best sandwiches out there. Get it spicy and even pick up a jar of the pickled veggies that top the marinated meat that you’re eating. Hank does all the pickling himself. 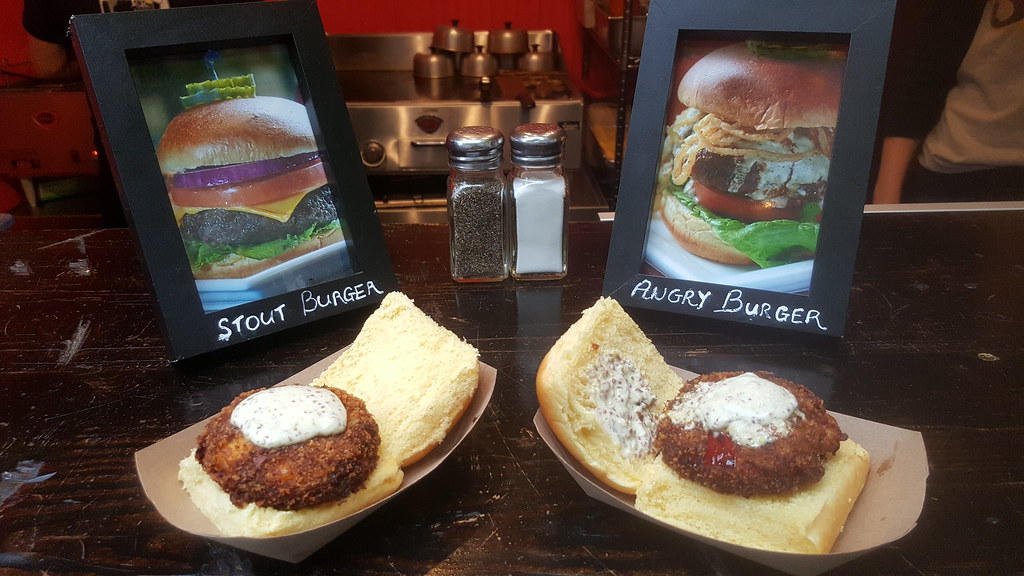 We ask, “What’s a “Crabmeat & Rock Shrimp Burger?” “Like a crab cake, but better” was the response we got from the workers at the Stout NYC booth. Hmmm – ok, two please. A few minutes later we both wished we could have said 20, please. It’s definitely not your mom’s Irish Pub food, it is SO much better! 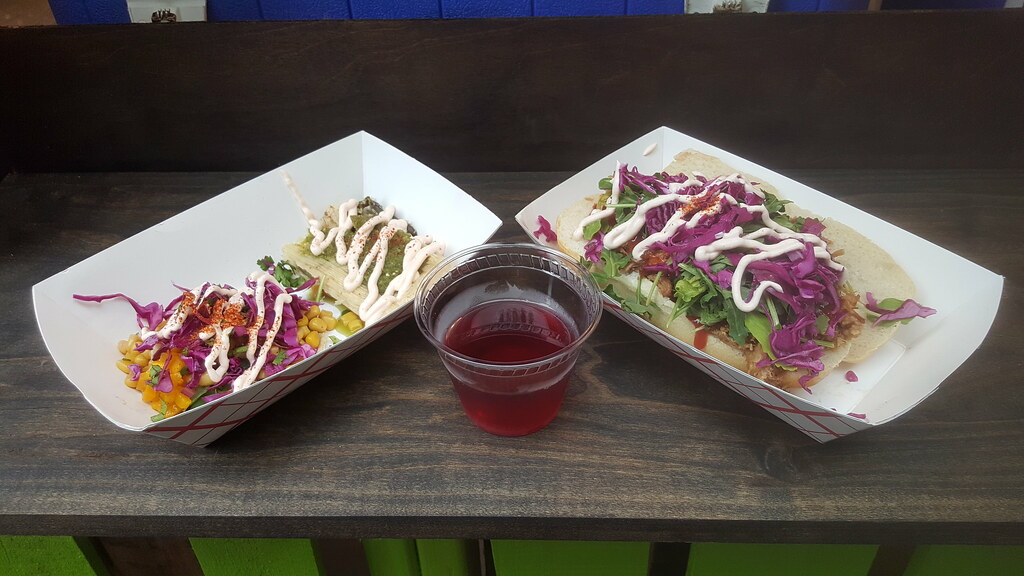 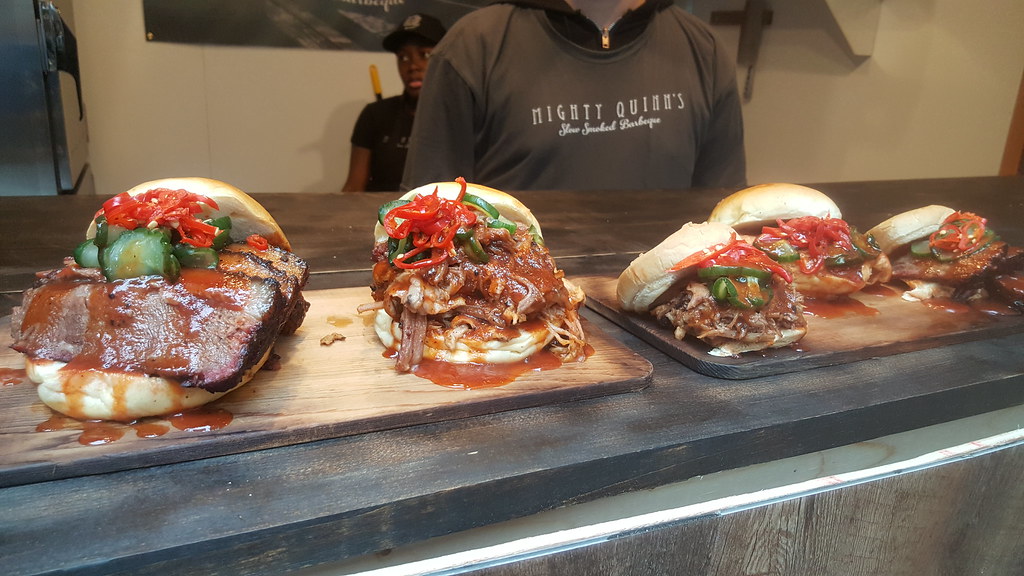 Both the brisket and pulled-pork lil’ sandwiches were devoured quickly. Mighty Quinn’s is keeping BBQ alive in NYC, NJ, and even internationally in Taiwan, the Philippines, Japan, and Dubai. Unless you are in those countries, maybe the one of the 11 Metro New York locations are closer to you. 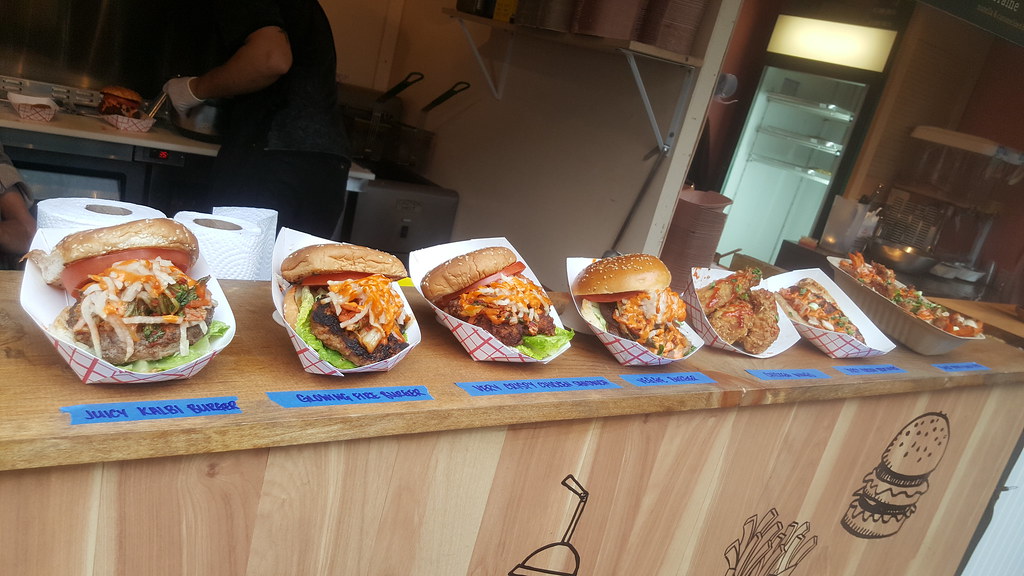 The restaurant’s name means “friend” in Korean and they definitely made one, or two, of us into fast friends. This new-fashioned spin on old food had some tasty burgers and a “Loaded Fries” side that was finger-licking good. 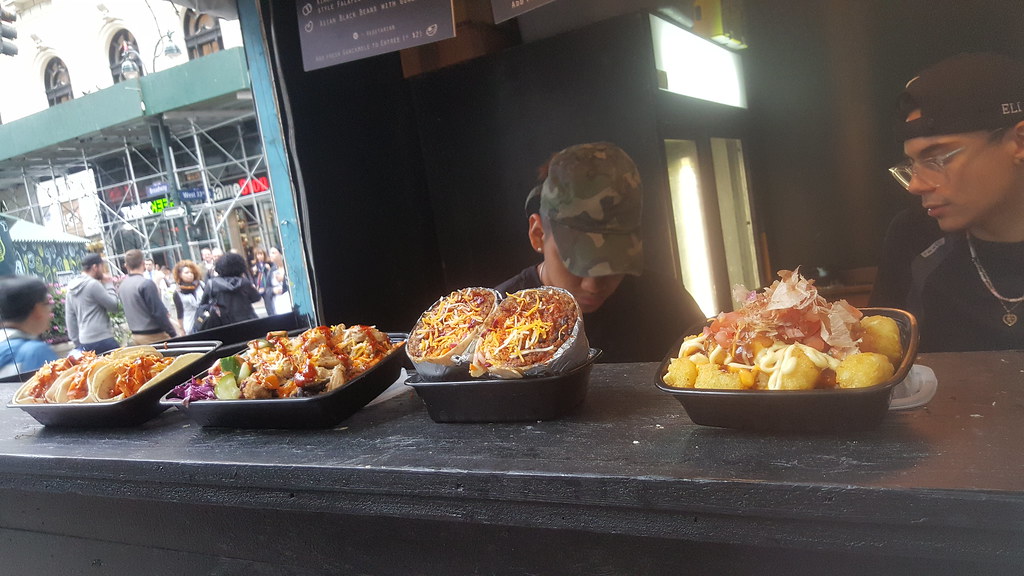 If an Asian dad and a Mexican mom had a kid, it would be Domo Taco: a burrito with tempura shrimp?  Well, it worked. 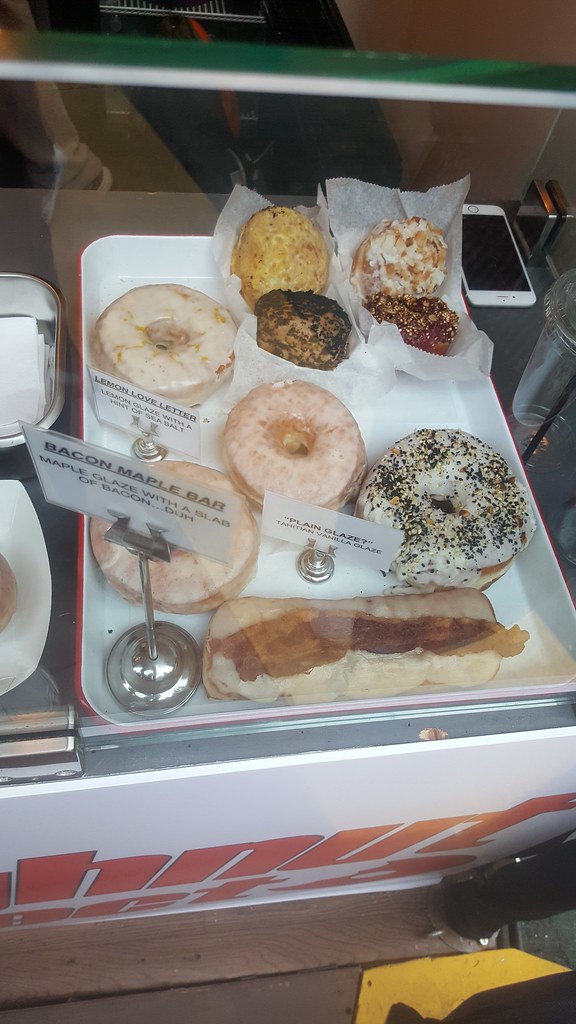 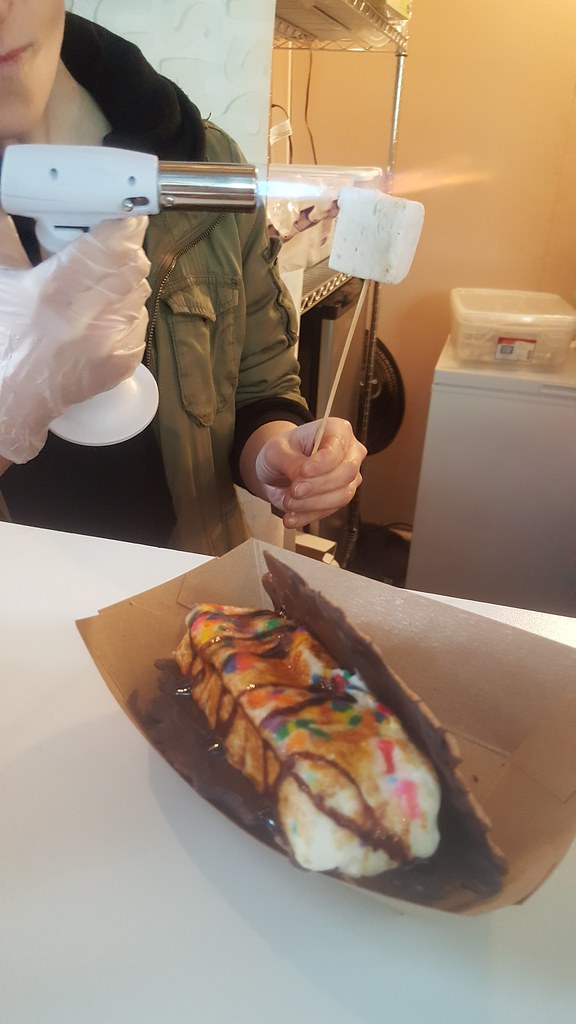 Don’t forget some libations and desserts. There was Renegade Lemonade with their tasty beverages (the Peach Mint was a top choice); Top Hops had a few brews on tap plus more in bottle; Squish Marshmallows creating some of the best flavored marsh’s I’ve ever had; and The Doughnut Project offering up some sweet goodness.

Others were there too of course but I think some of our favorites we talked about above will be give you a good idea of what’s on offer at Broadway Bites.