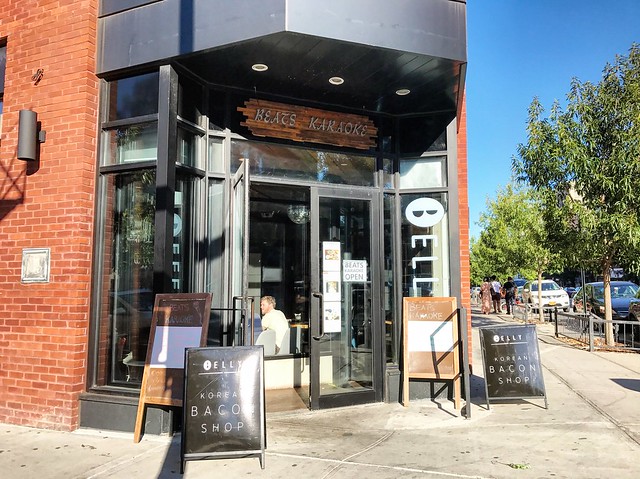 Some people may think that obsessing over one thing is not healthy. But when your obsession is pork belly, we totally understand.

Partners Phillip Cho and Anna Lee took their obsession with Korean pork and turned it into Belly, a new restaurant in Williamsburg with a revolutionary bacon omakase menu. They wanted to show their love for Korean bacon by giving their customers a great experience while making an approachable and friendly omakase menu showcasing the variety. To execute their vision, Cho and Lee brought on Executive Chef Brian Crawford, who worked with Chef Todd English. 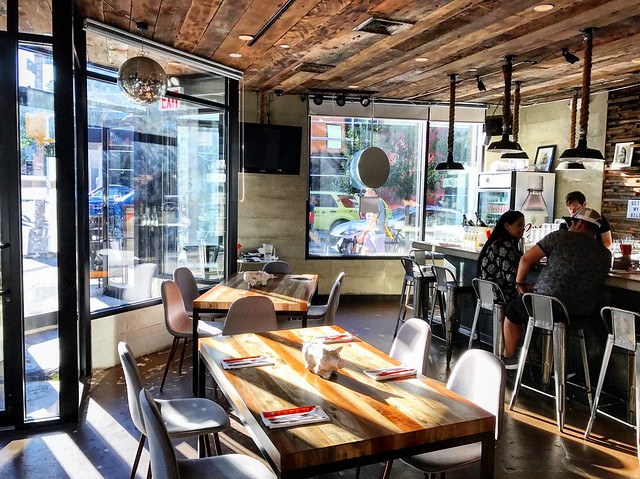 Situated on the corner of Driggs and Grand Avenue, you may pass by if not for the sandwich board outside advertising BEATS Karaoke, located downstairs underneath the restaurant. The dining space is cozy and casual, not large but seats roughly 25 people, with a lot of folks requesting to sit near the bar area. There is also a window that opens up to the street for takeout options, which is great for those who are lucky enough to live close by. 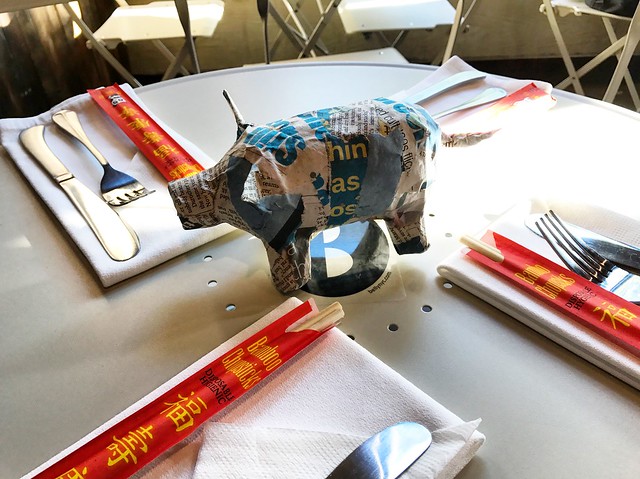 We kicked off the meal with some cocktails. Belly serves a variety of sake and soju cocktails, and even Makgeolli, unfiltered Korean sake. To try something new and different, I tried the Yuzu Makgeolli, which comes highly recommended. The unfiltered sake is a bit milkier than the non-filtered sakes, which enhances the flavors of the cocktail further.

For something refreshing for the summer, the watermelon and lime cocktail or the mojito soju cocktail really hit the spot. Also try the Belly Signature house cocktail while you’re at it. They also have a great variety of beers ranging from Ballast Point, Fat Tire, Harpoon UFO, and Korean OB Lager that pair super excellently with the pork belly. 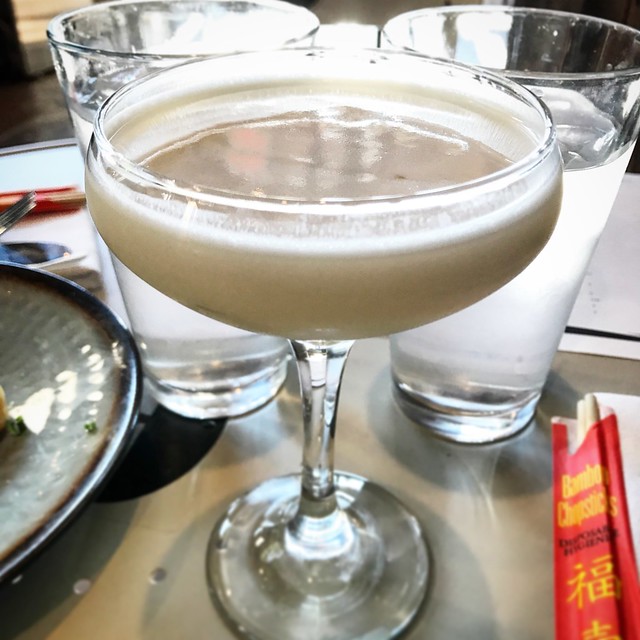 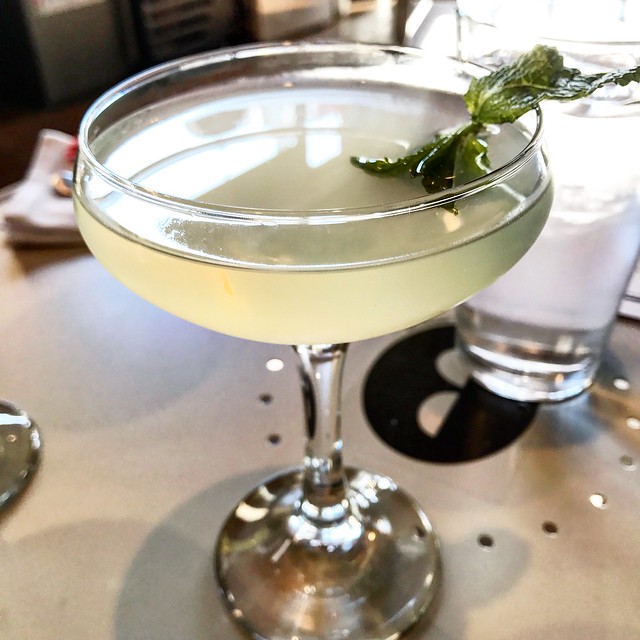 The omakase consists of nine courses: at $45 it is a fantastic value for a dinner riddled with pork belly. They said they will change the menu every month or two, but even since opening in early July, a few dishes have already been rotated. This is great news to always have a reason to come back and try something new.

The meal started off with a few smaller courses. The first course was a crostini bread topped with a creamy kimchi butter and bacon, followed by bacon sushi (cooked, don’t worry) topped with in-house made wasabi. Talk about a kick! 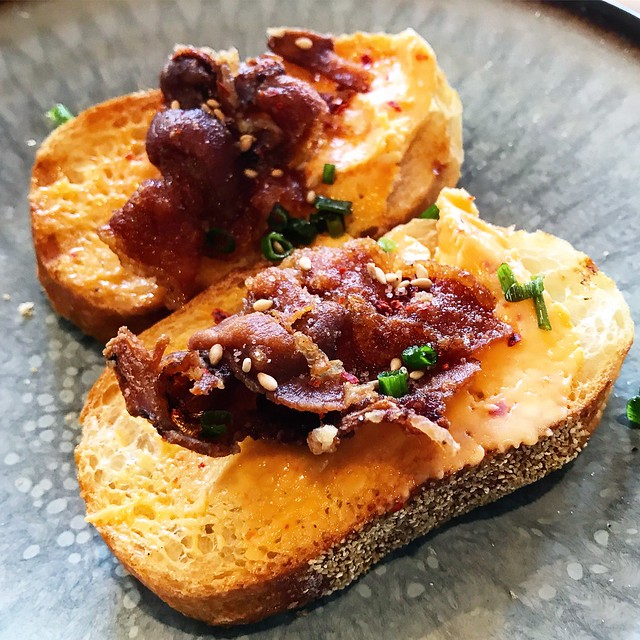 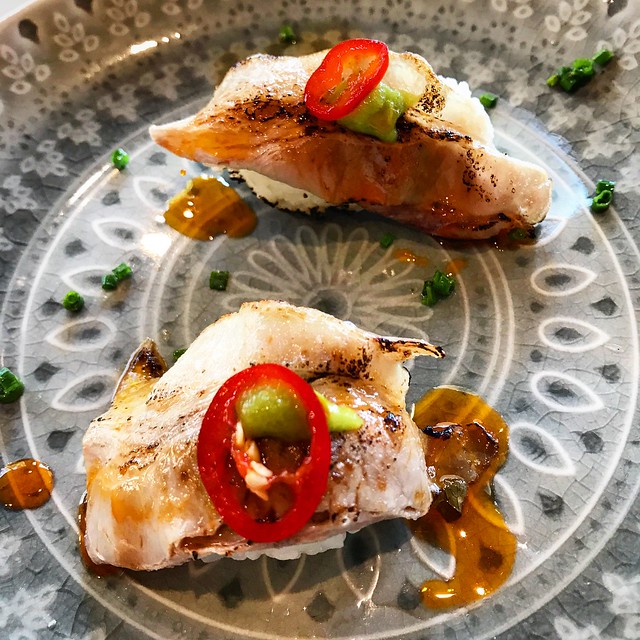 We moved onto the bacon carpaccio, also fully cooked, topped with parmesan cheese. To get our greens in, the fourth course was a mixed greens salad with a light miso walnut dressing topped with a flavorful slice of grilled Korean bacon. 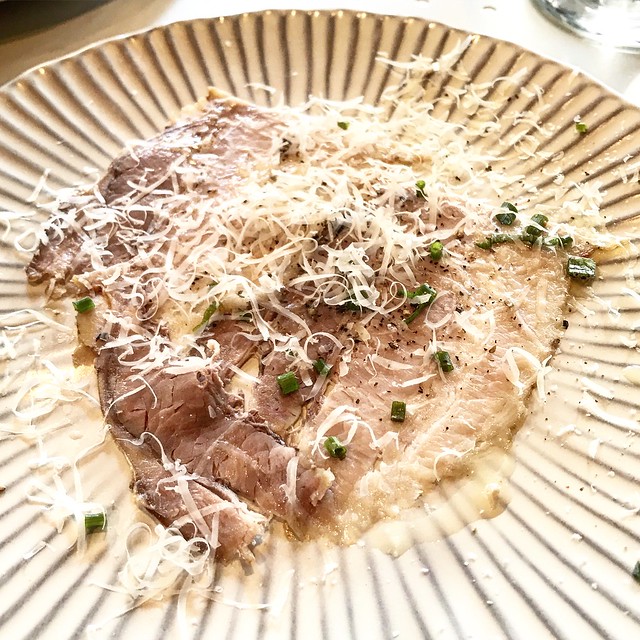 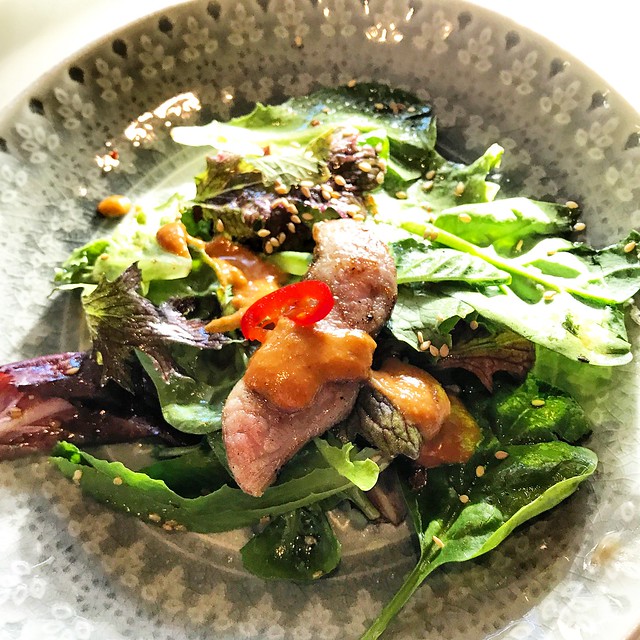 For the fifth and middle course, the “pasta alla belly” is a fan favorite, and was hands down my favorite dish of the meal. The pasta is cooked to perfection and tossed in a kimchi-based sauce, with a ball of ricotta cheese hidden among the noodles and homemade sausage. 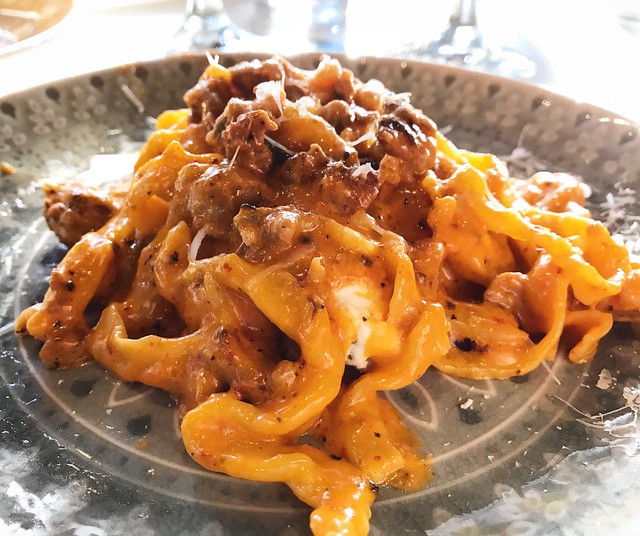 The Chef’s Bacon Steak was a delicious cut of tender pork bursting with flavor, definitely something you would likely find on the grill of a traditional Korean BBQ restaurant – but even more delicious because someone else has expertly cooked it for you. Following that was another hearty dish, the Bacon Schnitzel made from pork shoulder breaded with panko and a demi-glace sauce. 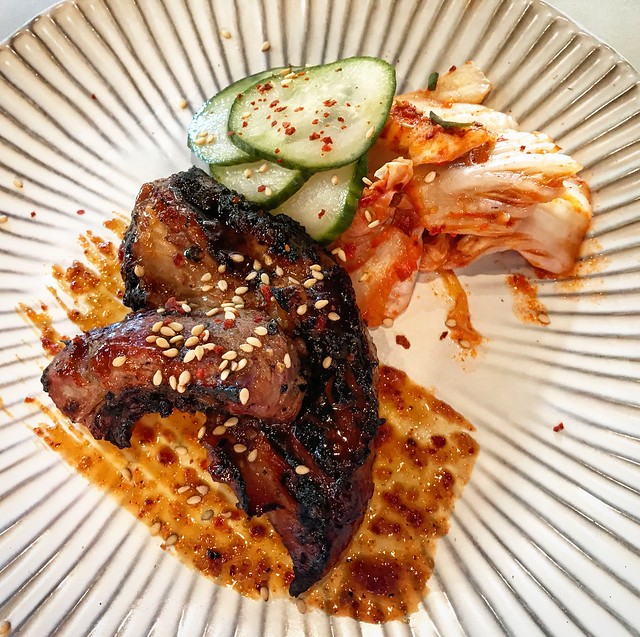 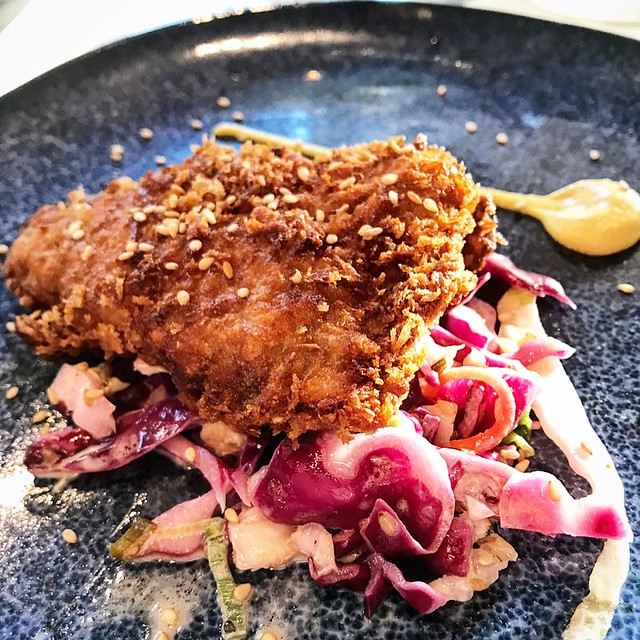 Already bursting at the seams, we approached our last savory course, the BELLYbap, the chef’s version of bibimbop. The steaming hot rice bowl contains eggplant, egg yolk, and tender pork belly mixed in with a housemade soy sauce. 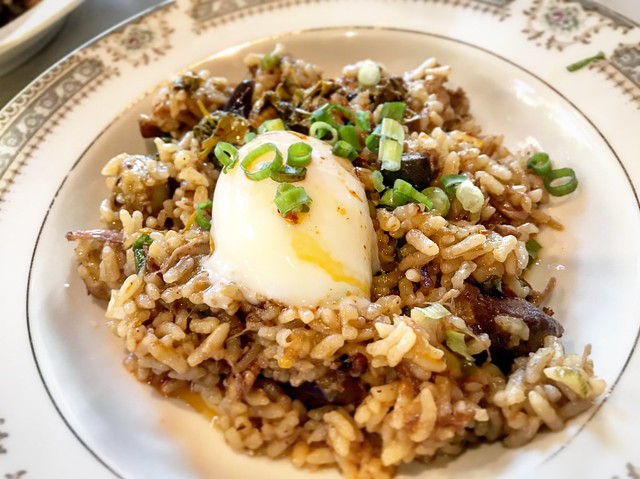 For the final course of the night: dessert in the form of a Hurricane Doughnut. The doughnut is not your typical round shape, but twisted and glazed with a sweet kimchi icing. The bacon is incorporate into the smokey whipped cream which gets its flavor from bacon fat. 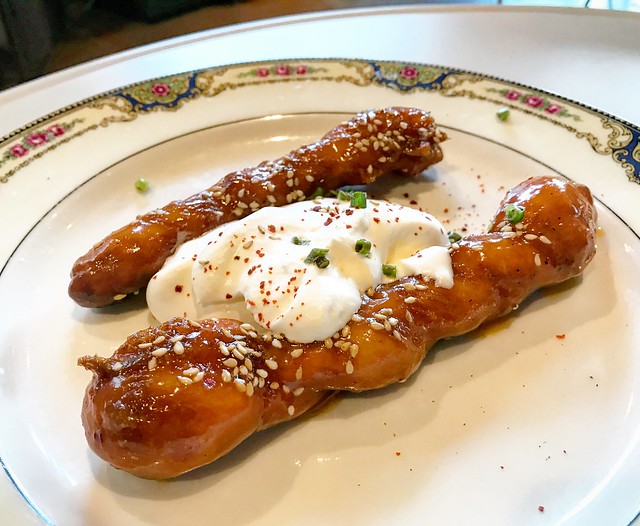 I admit that I was skeptical how I was going to handle 9 dishes of pork, but it was an amazing experience. However, if you feel daunted, Belly does offer four a la carte dishes: the Belly Sandwich, housemade gochujang-glazed pork belly with pickled cucumbers and Korean coleslaw on Balthazar bakery bread; the Bohemian Wrapsody, a grilled wrap filled with pork jowl, mixed greens, white rice, pickled cucumbers and red chili pepper, with housemade miso walnut sauce; the Get In My Belly! bowl, featuring pork belly braised in housemade soy sauce over white rice, Korean coleslaw, potato salad and a fried egg; and the Slim Kim bowl with pancetta-style pork jowl over glass noodles tossed with housemade chili oil, soy sauce, scallions, cilantro, sesame seeds and pickled cucumbers.

Don’t forget to end the night with a couple of hours of karaoke-ing downstairs!