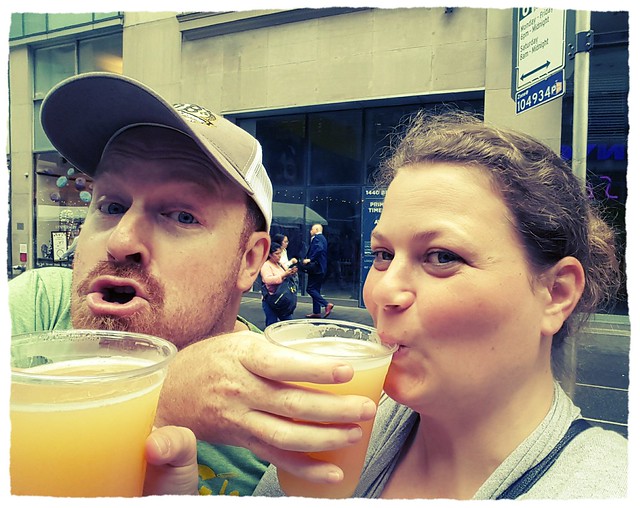 My husband and I went to check out Urbanspace Garment District, located on Broadway between 39th and 40th Streets, currently running through October 27th (except Sundays). It’s back for another go around at being a delightful pop-up outdoor venue of food and drink kiosks. 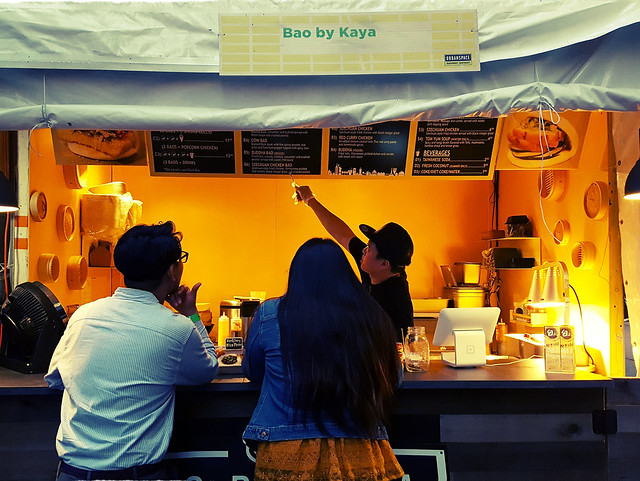 There is some seating within the space, which with the big table-umbrellas covering us kept us dry from some sprinkles due to the off-shore remnants of Hurricane Jose.  They allow the drinking of bought-on-site alcohol within certain sections and it’s a great place to grab a bite to eat either at lunch or after work. 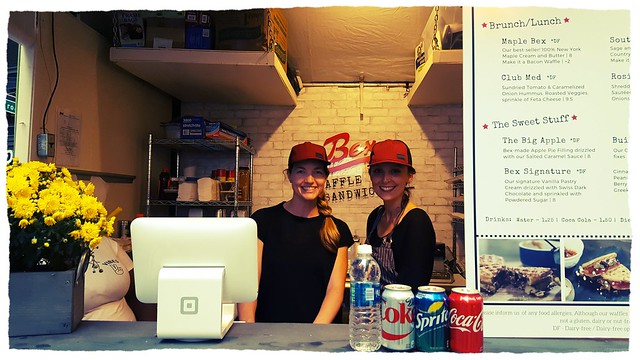 This is put on by Urbanspace and they do a few of these around the city throughout the non-winter months. They have Mad. Sq. Eats, which is open daily from 11am to 9pm until September 29th and also Broadway Bites which will re-open on October 4th and run through November 10th. Stay tuned here for more on those as well!

The vendor list at Urbanspace Garment District is not as extensive as the other pop-ups, only about 13 different food and drink vendors, but it definitely didn’t disappoint, especially on the dessert side. I want to highlight some of our favorites and I urge you to stop by! 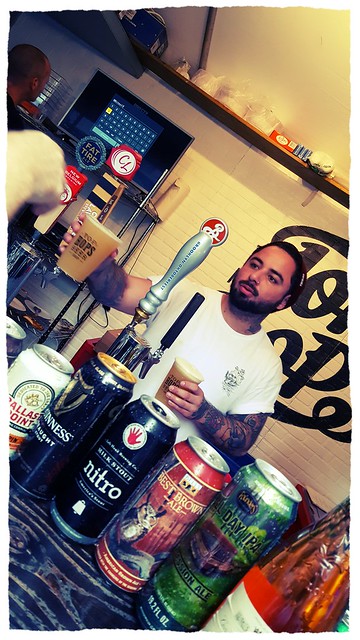 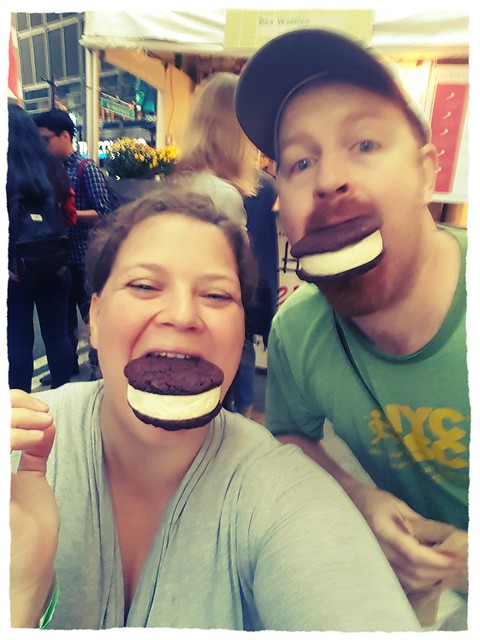 Tacos, Burritos and other fare with a Southeast Asian flair… the Beer Battered Fish Taco, as always, was SO light and fluffy… a perfect way to start the day

Whether you have an ice-cream sandwich from their all-the-time list or the monthly/seasonal rotational list you can NOT go wrong with these. My husband and I both went with the Thick Mint, which is Double Chocolate Cookies + Peppermint Ice Cream! 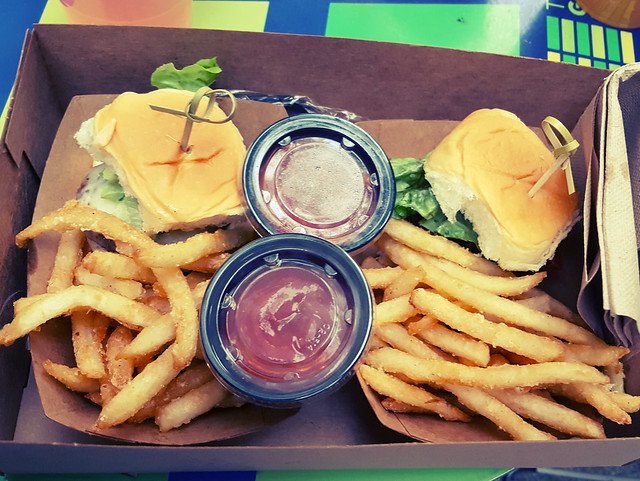 A cheeseburger and a hamburger slider (my husband doesn’t do cheese… he’s nuts!) and a couple of sides of fries please (nam nam nam – that’s the sound of my mouth DEVOURING the slider) . Perfectly cooked and even the right thickness of the tomato slice. Well done, Croton! 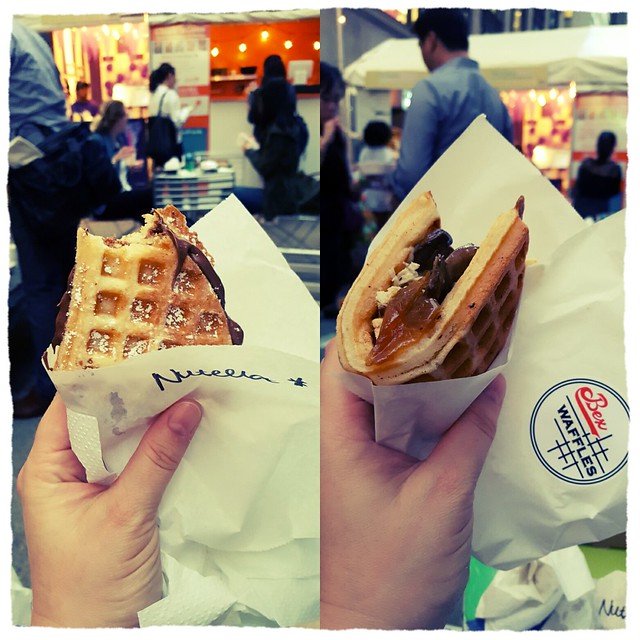 The gals at Bex are the newest on the block, literally and figuratively, as this is the first foray into the city for them, being out on Montauk the past 2 summers with their vintage truck “Barry”.  One double-nutella waffle for me please, and my husband might want something too but hurry hurry with that NUTELLA!!! Don’t judge! We all have our vices, no?

If an Asian dad and a Mexican mom had a kid, that would be Domo Taco, a delicious combinations of flavors in both the meat and the toppings . We had the Teriyaki Steak Taco and a Tempura Fish Taco this time. 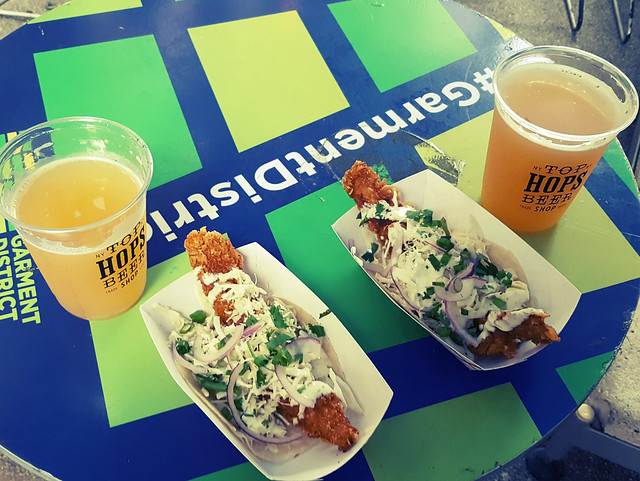 With all this food, we need something to wash it all down with… how about a beer? To go with our Coney Shack fish tacos pictured above, Top Hop brought us some liquid goodness from their Lower East Side shop: 4 beers on tap and about a dozen or so more bottles and cans to choose from. We both chose the Top Dollar IPA from Barrier Brewing which was on draft – hoppy, smooth, cold, and perfect.

A few other vendors were there too but I think the examples from above will give you a good idea of what’s on offer at Urbanspace Garment District.