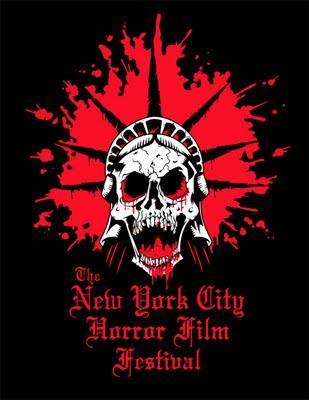 NYC can be a scary place. From giant rats and flying cockroaches to invisible bed bugs and stinky subway riders we have it all. But for pure terror you need to go to the annual NYC Horror Film Festival. The largest and longest running horror film festival in America, now in it’s 15th year, is an annual four-night long FrightFest held at the Cinépolis Theater in Chelsea. If you like scary movies then this festival is for you!

Founded by the late filmmaker Michael J Hein (1970-2011) and his production company MooDude Films in 2001, he had just finished making his first feature film, Biohazardous, about a teenager who discovers that a local research company founded by ex-Nazi scientists has been creating zombies. When he went looking for horror film festivals to submit it to he found them in Canada and Los Angeles but not in NYC, so he decided to do something about it. 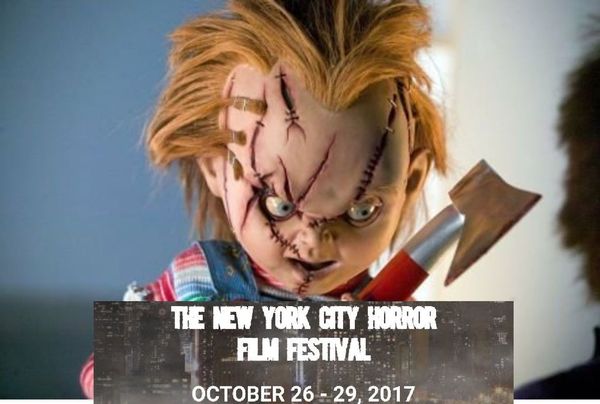 No stranger to the macabre, Michael and his family have been involved with the horror genre for the past 30 years. They were all connected in one way or another in the making of Biohazardous be it pre-production, on set or post.  Even the kids in the family are now running around chasing zombies and carrying fake fingers and at just 6 years old his nephew Hunter made his horror debut as a zombie in Generation Um starring Keanu Reeves. 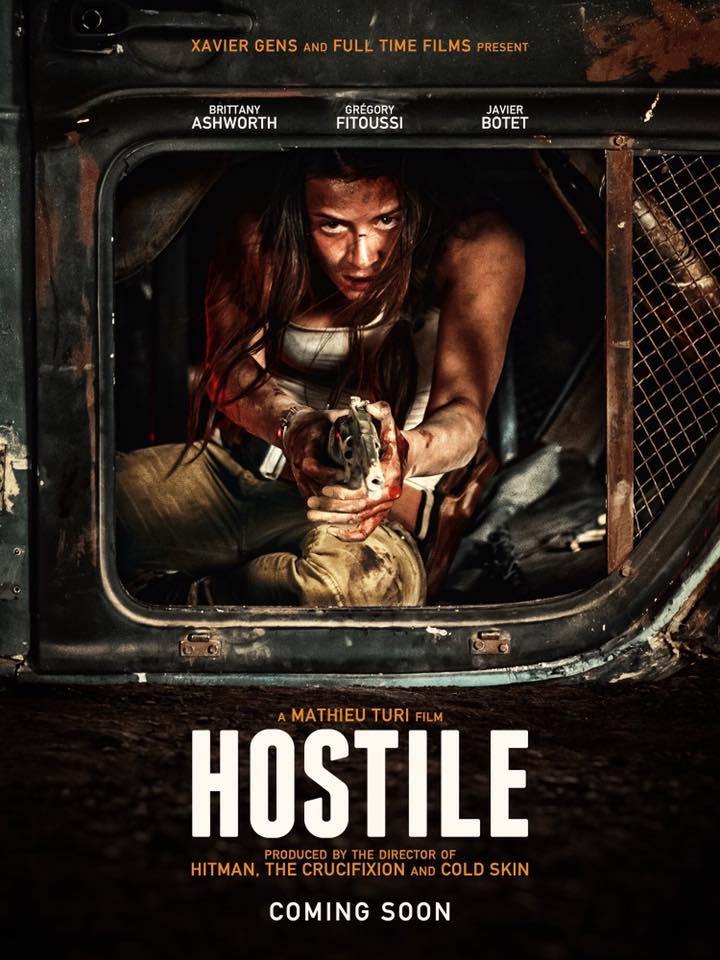 My girlfriend and I, being horror fanatics ourselves (we run a MeetUp group called NYCGRINDHOUSE.com), attended this years festival and saw some freakishly good independent horror films. One of my favorites was Hostile. It’s centers around Juliette, a sexy lone survivor in an apocalyptic era, who fights to survive against hunger, thirst, a broken leg and strange disturbing creatures that only comes out at nighttime. Sounds like another midnight ride on the A train to me minus the apocalypse of course. 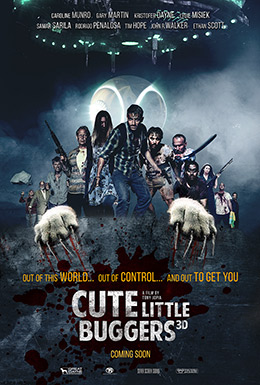 Another fun film we really enjoyed was Cute Little Buggers. It’s Gremlins meets Hot Fuzz set in the English countryside. When hostile aliens crash land on local farmland the villagers at the summer ball get suspicious when young women start going missing. It’s Bugs Bunny gone wild! Easter will never be the same for you after seeing this gem. 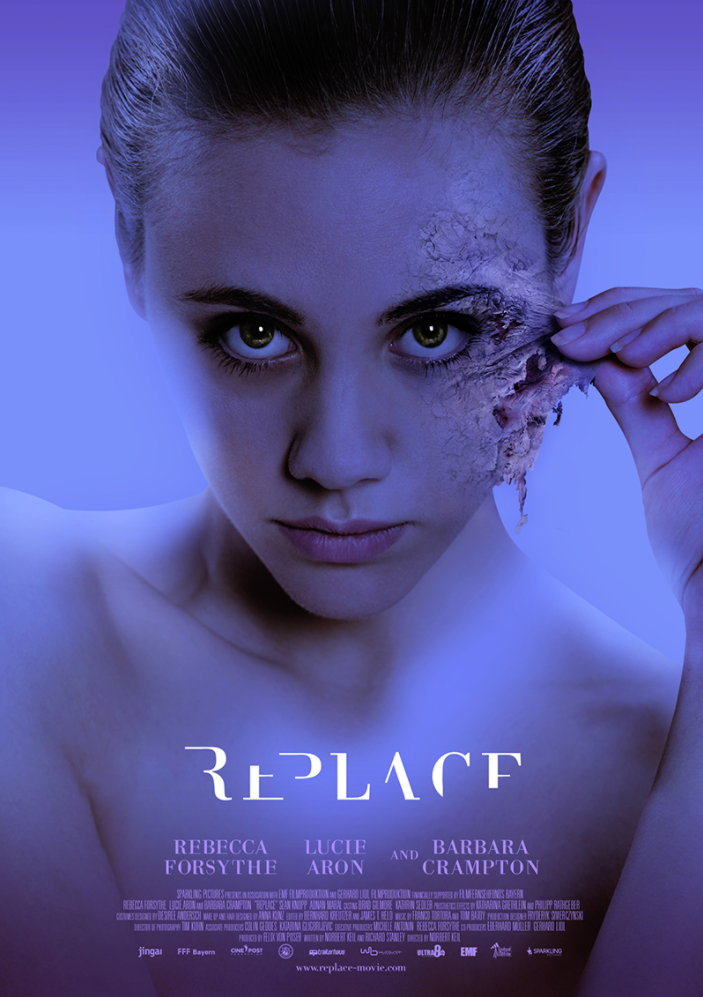 Got skin problems? Sick of spending all your hard earned money on cremes and lotions? Well the, you’ll thoroughly enjoy Replace, about a beautiful young woman named Kira who, afflicted with a nasty dermatological disease, discovers she can replace her skin with that of other girls. Leatherface, wherever you are, this is your dream girl come true! 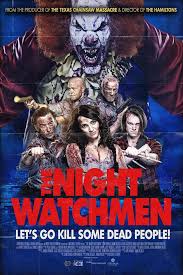 My favorite film of the festival was the brilliantly funny flick The Night Watchmen.  Do you like clowns? What about vampires?  Well then what about killer vampire clowns? Yeah, that’s right. Pennywise is child’s play compared to these creepy mutant clowns terrorizing the city of Baltimore. But don’t worry as The Night Watchmen are coming to save the day. If you like horror-comedies then you’ll love this one. Trust me. 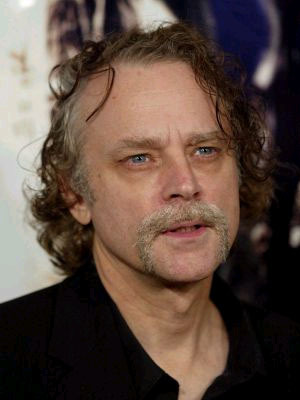 The festival also presents a Lifetime Achievement Award each year to honor outstanding performance and accomplishment that has substantially influenced the horror genre. Past recipients have included the late great father of all Zombies, George Romero (RIPieces George), the “Godfather of Gore” Herschell Gordon Lewis, and the award-winning special make-up effects creator, actor, stuntman and director Tom Savini, among many others.

This years recipient was Brad Dourif. Those in the horror community know him as the voice of the killer doll Chucky in the popular Child’s Play franchise. You might recognize him as well from his Academy Award nominated role of Billy Bibbit in One Flew Over the Cuckoo’s Nest alongside Jack Nicholson. With many more credits to his esteemed career than I can name here, I’ll name just a few that I thoroughly enjoyed. He starred in Director John Carpenter’s Eyes of Laura Mars, David Lynch’s Dune and Blue Velvet, and William Peter Blatty’s The Exorcist III. The award is well deserved for this outstanding actor.

This was our second year attending the New York City Horror Film Festival and we had a brutally killer time!  We can’t wait to see next years showcase. Maybe one of our ghoulish friends from NYC GRINDHOUSE or the New York Horror Movie Meetup will submit a film (hint, hint…).

For more info on the NYC Horror Film Festival (NYCHFF) check out them out on Facebook here: www.Facebook.com/NYCHorrorFilmFestival 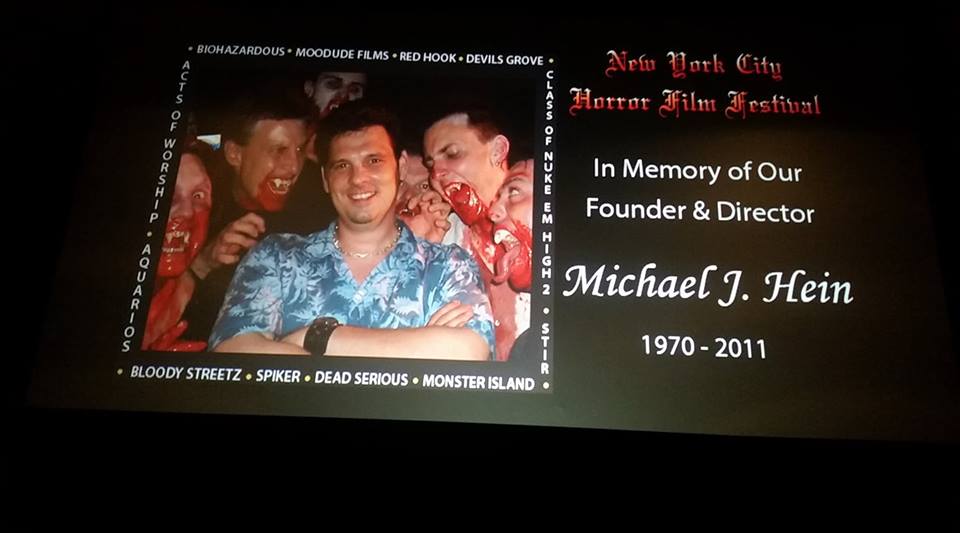 When it came to movie making, Michael did it all, from Special Effects Make-up Artist to Screenwriter, from Producer to Director. Through his company MooDude Films, Michael produced and directed various movies including: The Word, Blood Rails, Red Hook, Dead Serious, Biohazardous, Cyclone, andThis is How My Brother Died. He also produced and packaged the popular DVDs, Killer Shorts, parts 1 & 2.

In addition to screenwriting, producing and directing, Michael is the Founder and Director of the New York City Horror Film Festival, America’s largest and most recognized genre film festival, held yearly at various venues throughout New York City. The festival is competitive, screening approximately 50-60 films each year.

Although I never had the pleasure of meeting him personally, I knew of the legendary man they call The Black Saint. In fact, anyone worth their weight in the Horror Community, both in and outside of NYC, knew of him. A writer and co-host of the Horror News Radio (HNR) podcast you may have read some of his articles in FANGORIA magazine, Horrornews.net or Gruesomemagazine.com. He has followers from around the globe and his presence is deeply missed in the horror community. RIP Santos.