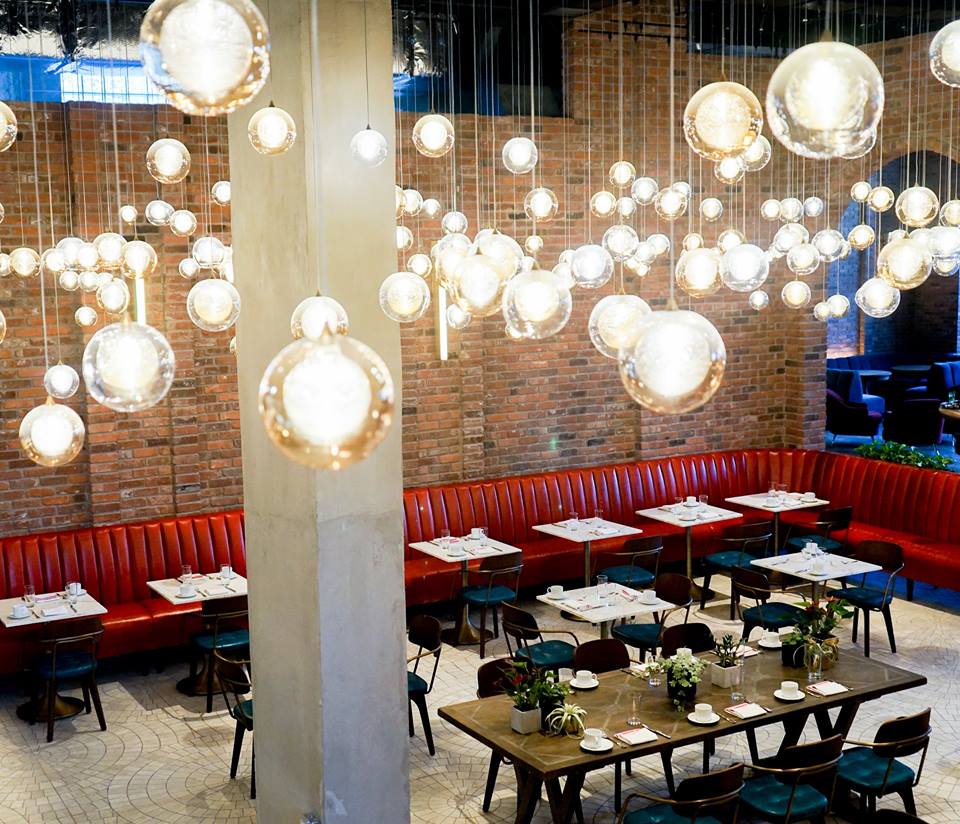 What would make a Manhattanite from the far northern reaches of Inwood take the ultra-long ride on the A to Williamsburg, Brooklyn? I’ll tell you what: the newly opened Harvey restaurant in the stylish Williamsburg Hotel. My girlfriend and I hopped on the train to take the journey a few weeks ago to attend their grand opening and it was well worth it.

Harvey is a stylish 105-seat New American bistro with a focus on pure, healthful foods and artisan breads. Harvey mills its own flours in-house in partnership with the Brooklyn Bread Lab, naturally ferments its own pancakes, and incorporates house-made pickles, cultured kefir and labneh. The restaurant’s vegetable-forward menu emphasizes fresh, inventive seasonal fare with a focus on whole grains as well as local meat, fish and produce. 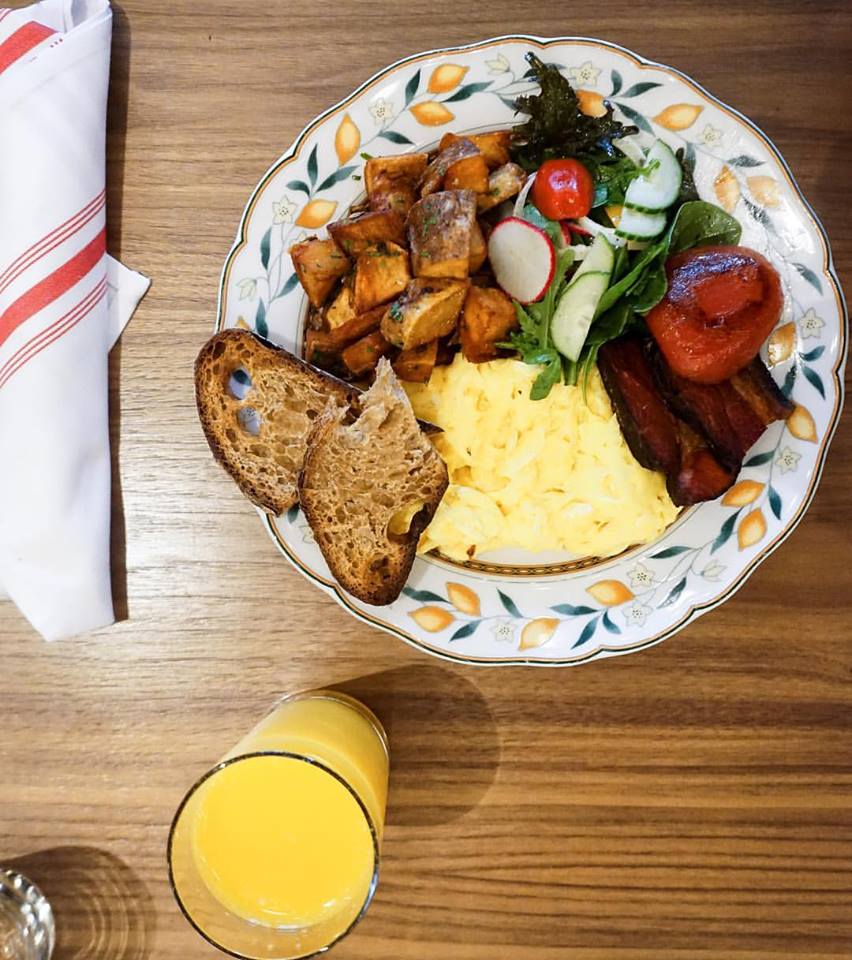 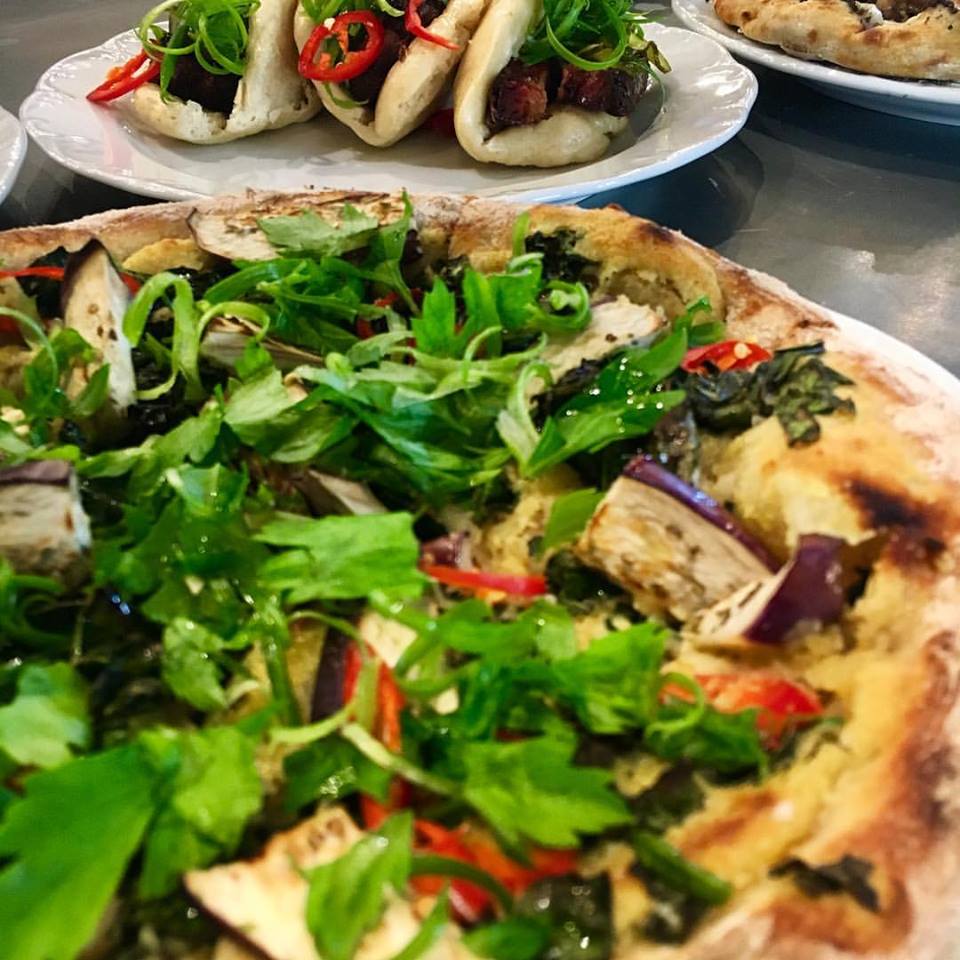 Chef Kevin Chun definitely knows what he’s doing as both were excellent. Born to parents of Hawaiian and Chinese descent, Chef Chun attributes his love for cooking to his mother, who encouraged him to help with family meals from an early age. A graduate of the Le Cordon Bleu program at the California School of Culinary Arts, Chun launched his culinary career by working under renowned Hawaiian Chef Roy Yamaguchi at Roy’s Restaurants. He later moved to New York City where he worked at several prestigious restaurants including Executive Sous Chef at The Soho House, Executive Chef at the Macao Trading Company in Tribeca, head chef at Yunnan Kitchen in the Lower East Side, and Executive Chef at Louie & Chan. 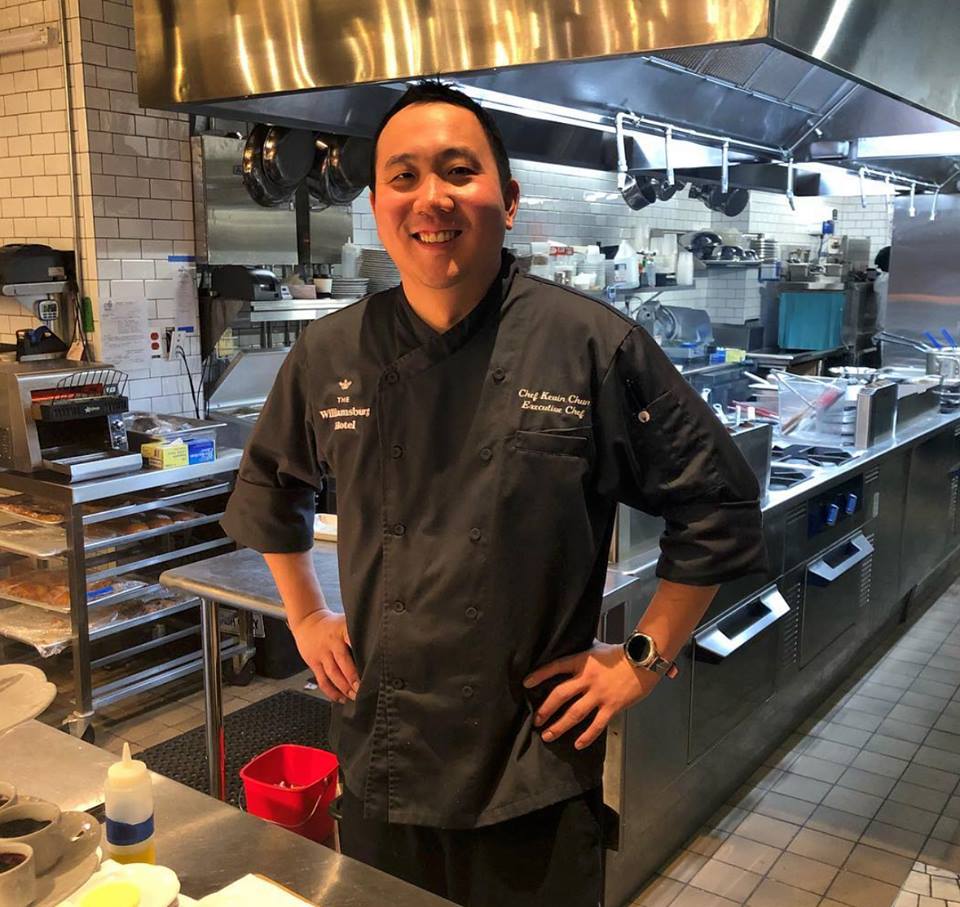 To loosen up our palates before dinner we started at The Cellar, the hotel’s sexy subterranean bar, with two finely made cocktails. I chose the refreshing Garden Gimlet, made with gin, mint, cucumber and lime, and my partner took a hotter Wild Thoughts made with jalapeño infused tequila, orange liquor and pineapple. The bar itself is warm and cozy and open to both hotel guests and visitors. Every Friday night the Alison Shearer Band plays and they definitely know how to jam. Alison is a saxophonist (you don’t see too many female saxs) and has performed at The Blue Note NYC, Lincoln Center, Merkin Concert Hall, The Kennedy Center, and Rockwood Music Hall, among many other venues. She and her band sound Awesome! 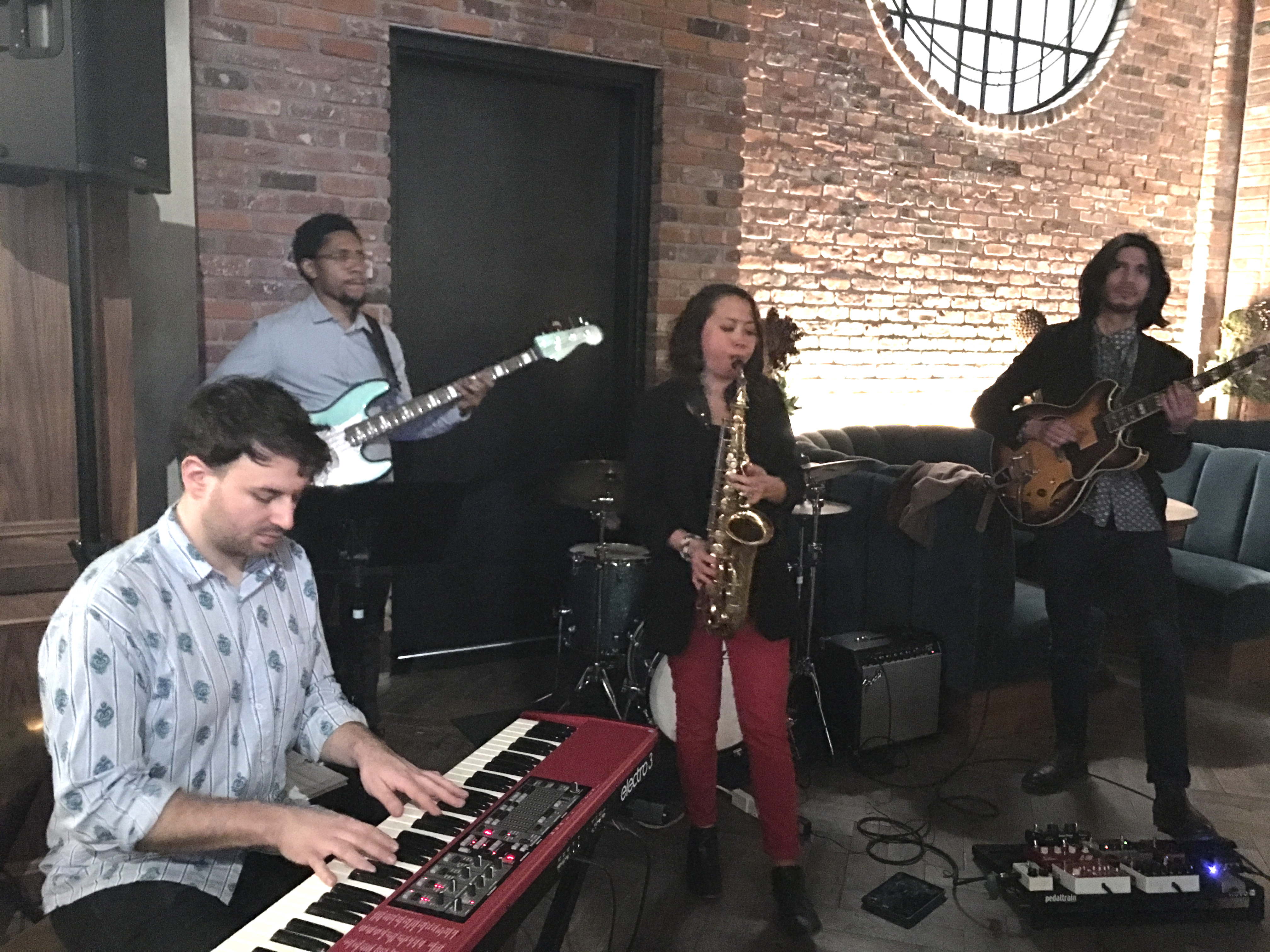 Sufficiently loosened, we now began our feast.  From the garden we sampled the Lemon Scented Kale with fennel, avocado, pickled chiles, millet and green goddess dressing, along with the Spicy Fried Pumpkin with fresh chiles, parsley, parmesean and labneh. The kale was nearly a meal in itself and the pumpkin paired great with it.

Going out to sea we tried the Octopus and Sweet Potatoes with smoked pimenton yams, purple sweet potato mochi, charred scallion and lemon relish, and the Pan Seared Aurora Salmon made with braised mustard greens and aguachile. 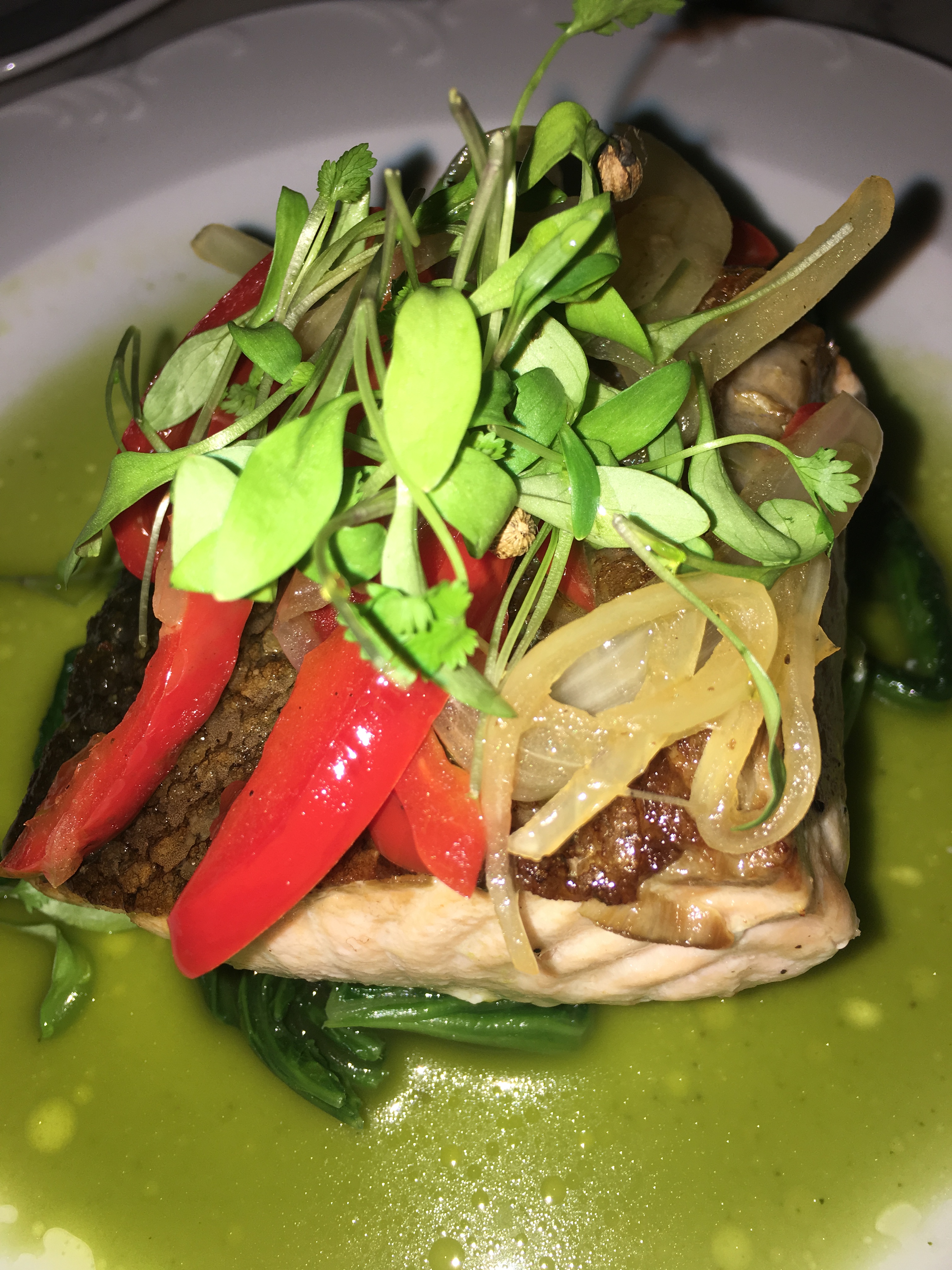 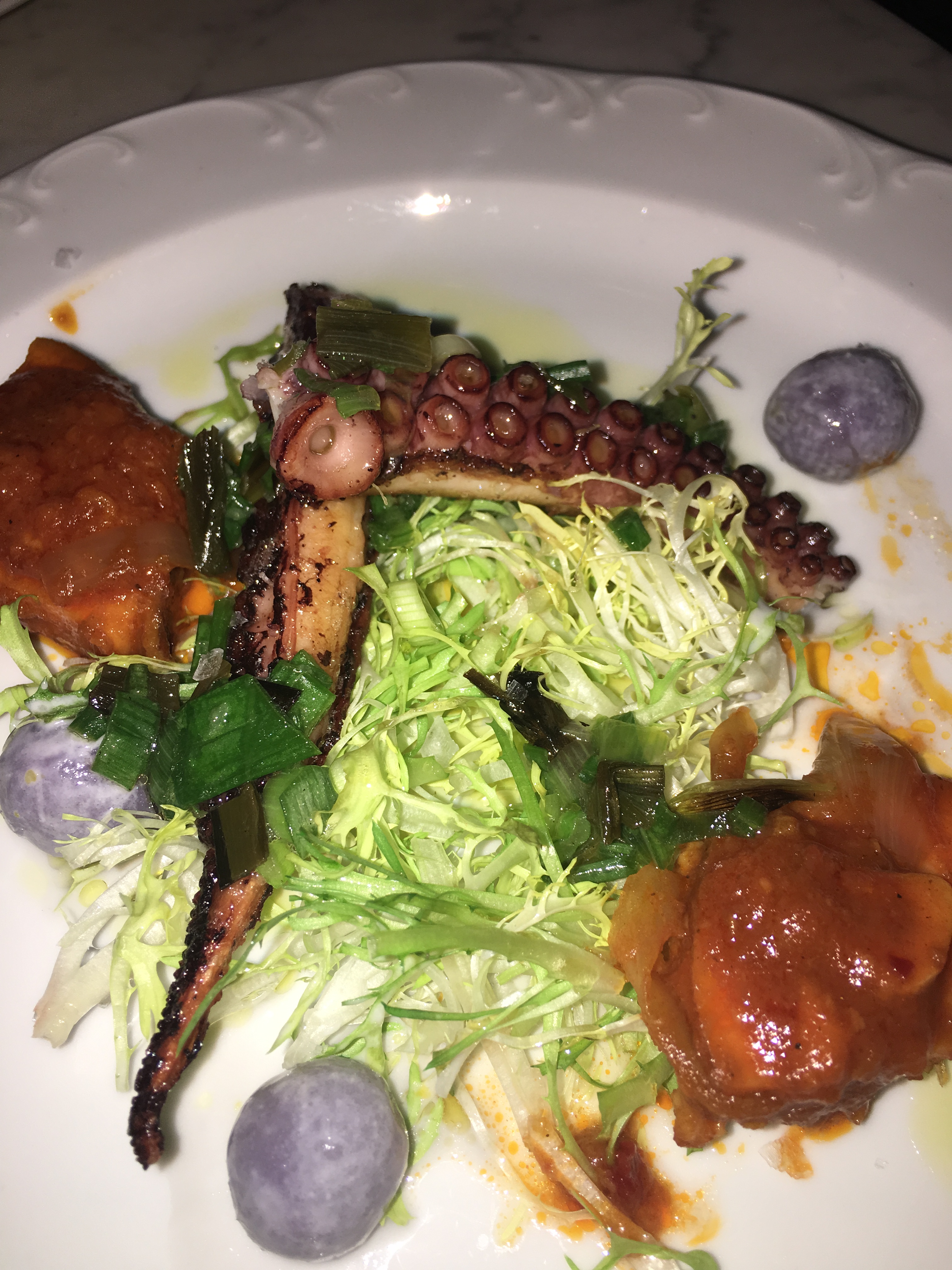 Coming back to shore we sampled the Half Roasted Organic Chicken with wood-fired market vegetables, petite potatoes and chimmichuri, and ultra-delicious Dry-aged 16 oz. NY Strip Steak, served with crack potatoes, charred lemon, roasted garlic and jalapeños. Both were made to perfection, but I’m a steak man and this steak was no joke.

Loosening up my belt a notch I tried some of their pizza. Their Diablo, made with calabrian salami, nduja, calabrian chiles, smoked ricotta and honey, will please even the toughest NYC pizza critic. The Marochino was excellent as well, made with harissa, cauliflower, spicy avocado, roasted tomatoes, artichokes, and pine nuts. 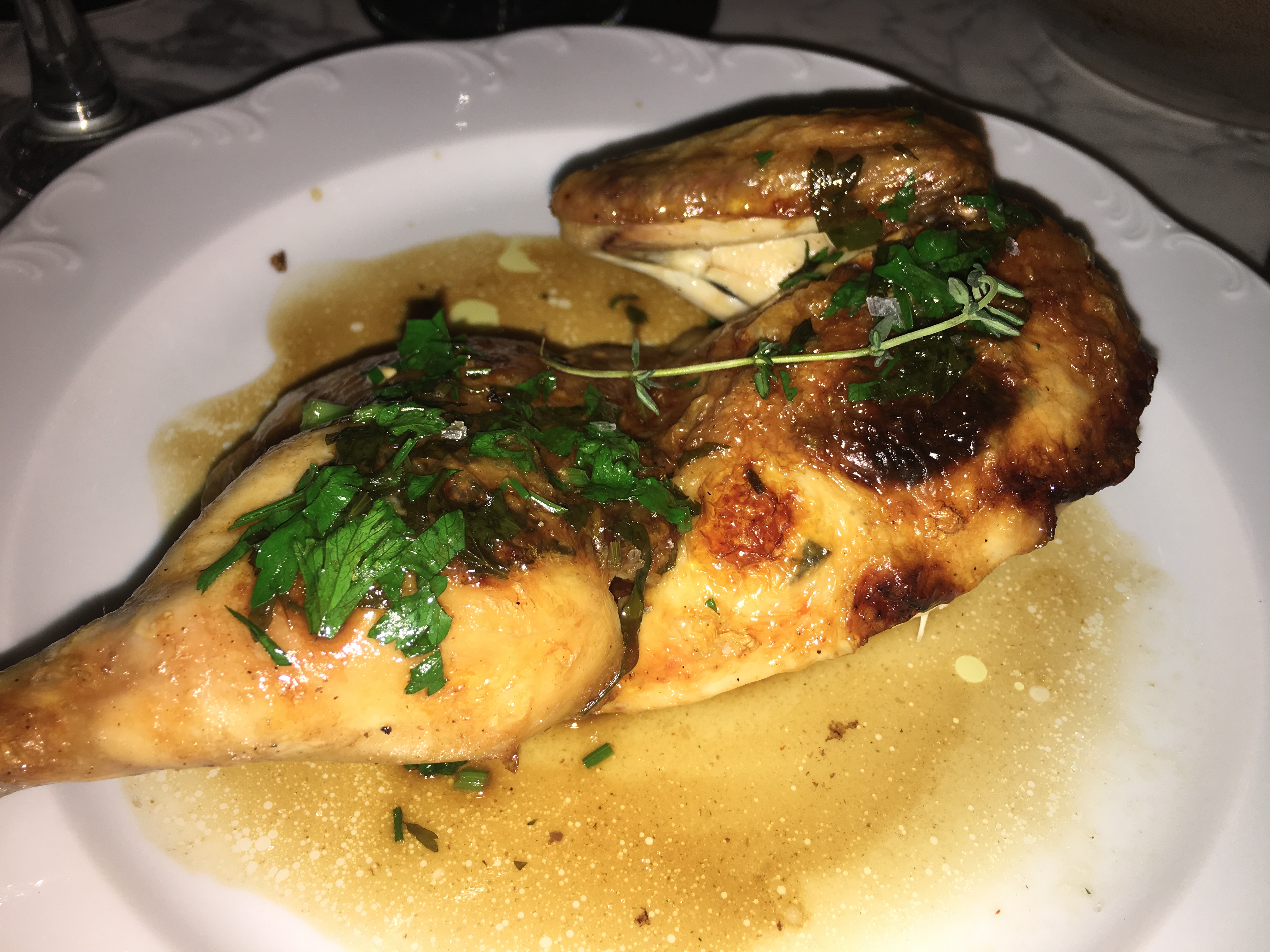 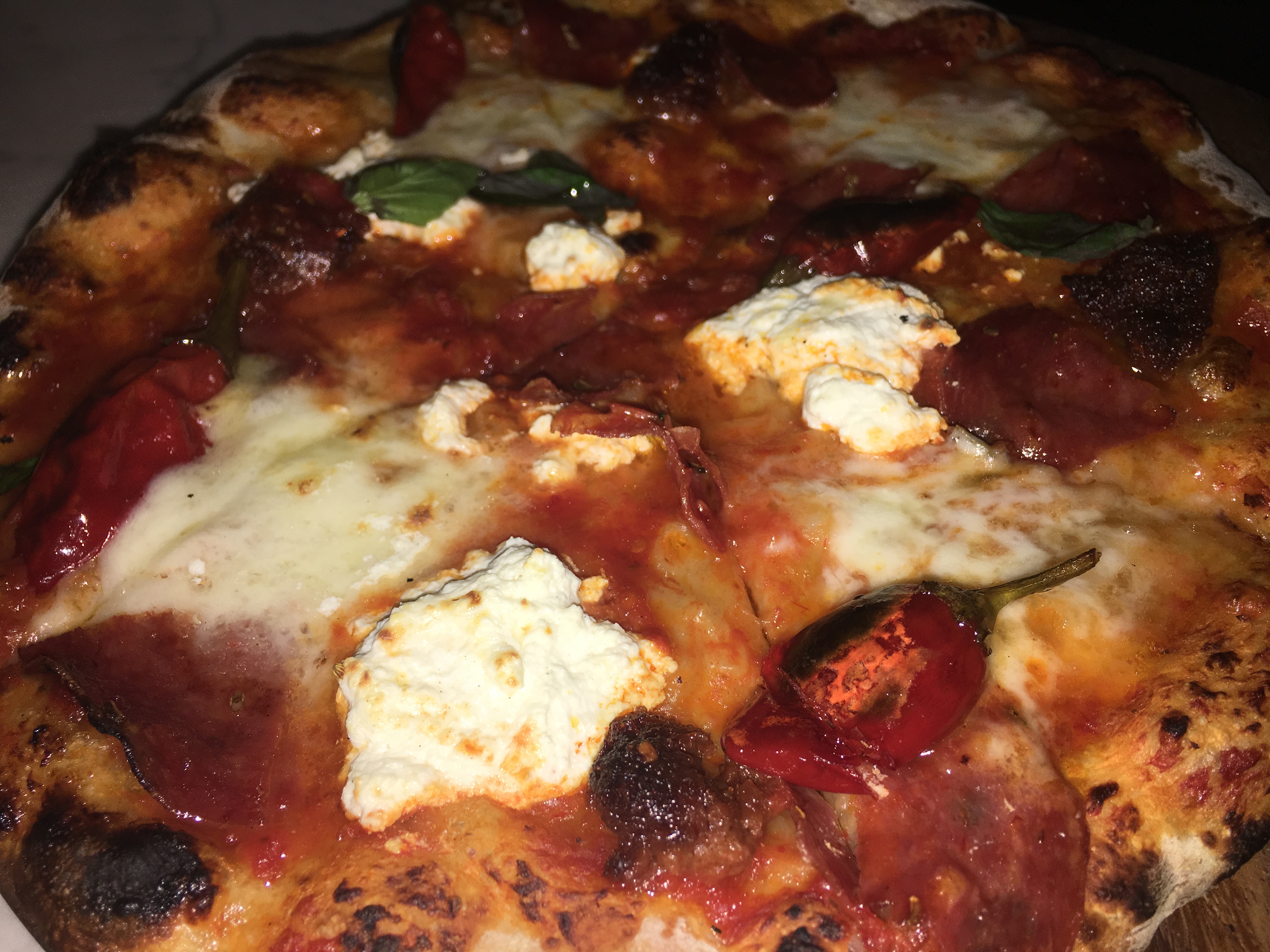 Nearly bursting it was time for a break. We had two more tasty cocktails, the Perfect Harvey with vodka, aperol, amaro and orange, and the Midnight Cowboy, which seemed to be a popular favorite, made with rye, honey, lemon and ginger beer. I was ready to shut down for the evening until dessert was announced, because what meal is a meal without dessert? The Warm Chocolate & Espresso Bread Pudding was just as it sounds – delicious!  So was the Eton Mess, which was baked meringue with mixed berries, sweetened yogurt, and nutella. 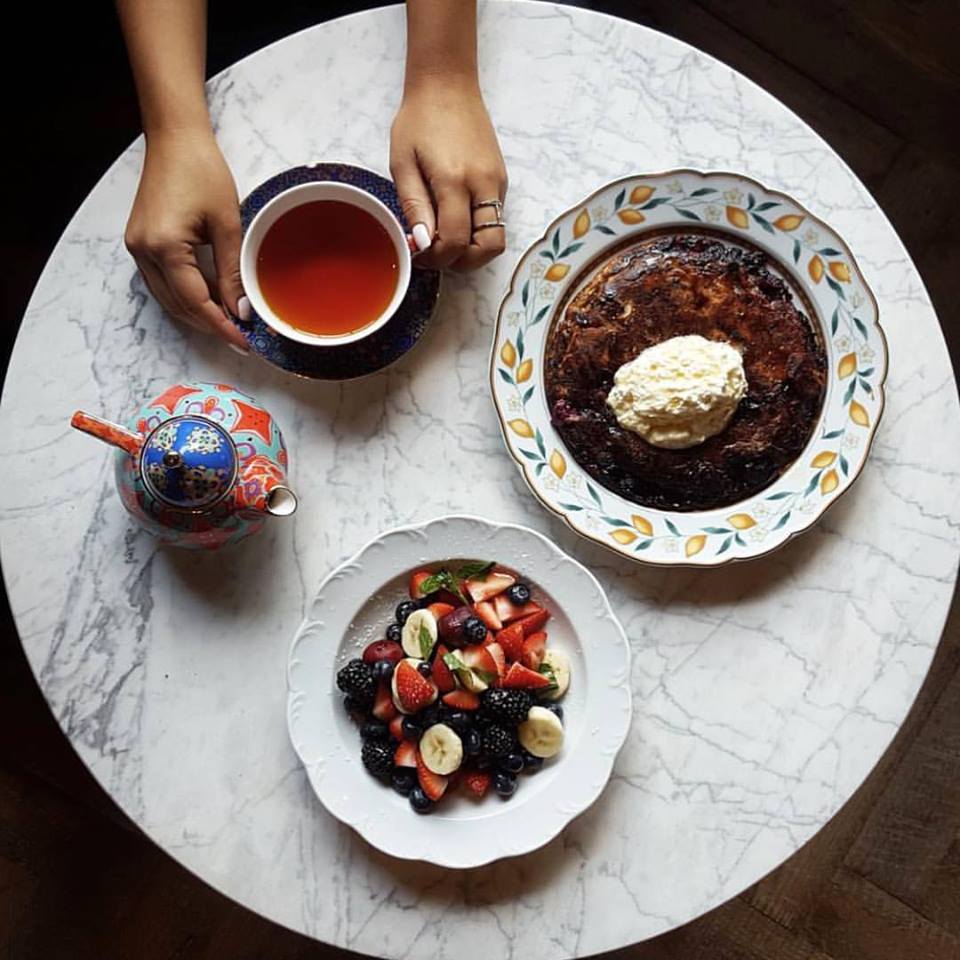 My oh my, I’ve kissed my diet goodbye. Guess I’ll have to run a mini-marathon tomorrow, but it was well worth it, and I’d do it again in a heartbeat. Definitely check out this cool new chic bistro soon, you won’t be disappointed. 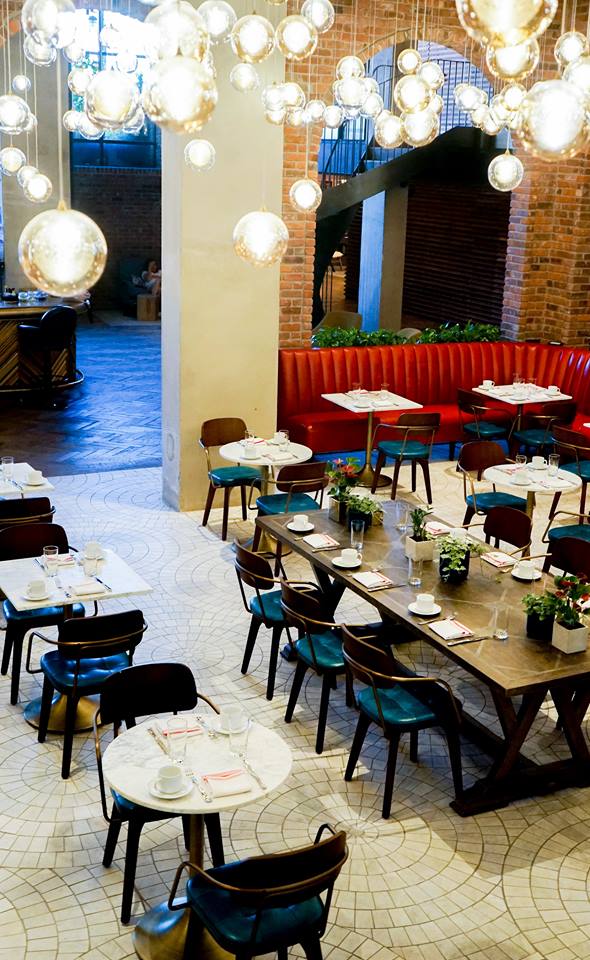 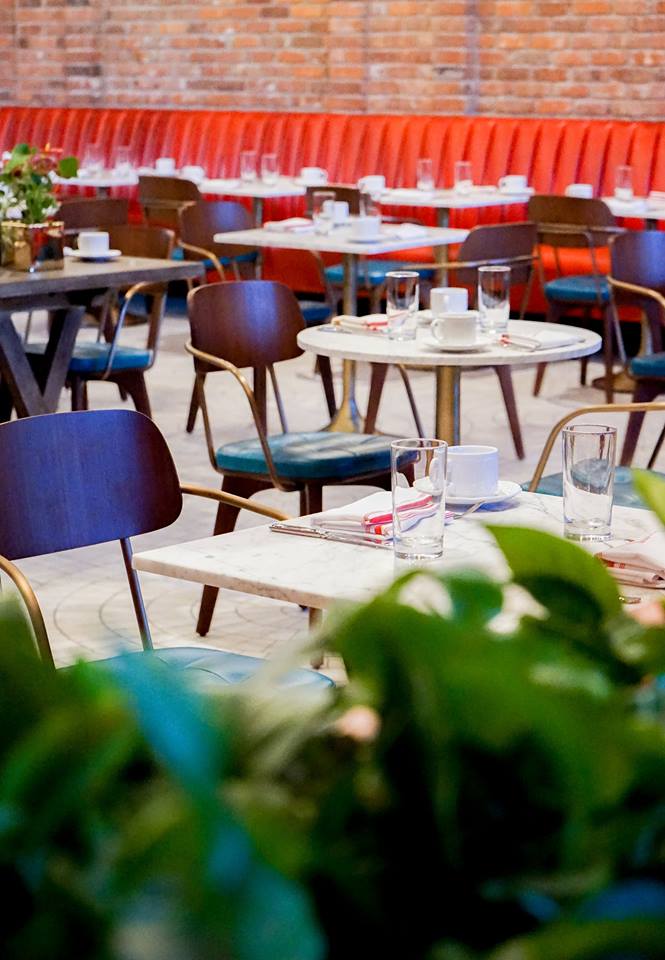 Photos via Harvey at the Williamsburg Hotel and by Socially Superlative