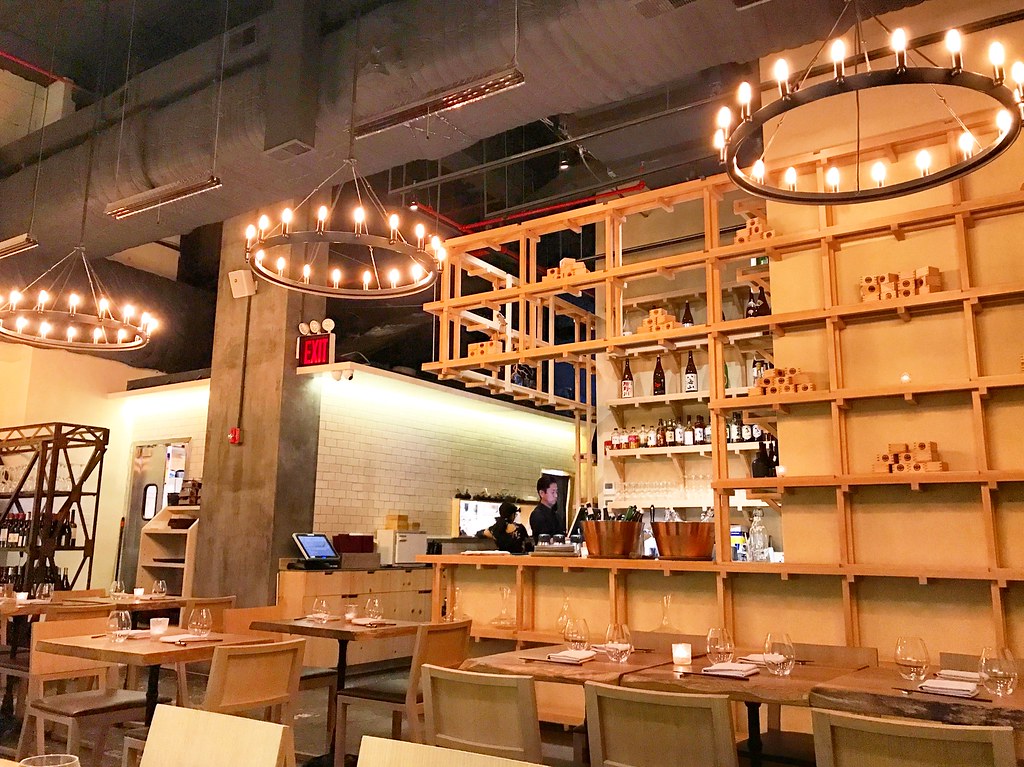 We all have that neighborhood Japanese restaurant that we order from when you’re too tired too cook after work but still want a quick and healthy dinner option, with an affordable combo option for around $20 that you have saved on Seamless. Then as you scroll through you Instagram feed and see all of the amazing omakase sushi options that range from $200 to $600 per person, you sob with envy as you dunk your California roll piece into soy sauce and sip on lukewarm miso soup.

It’s not that you don’t love your neighborhood sushi spot, but sometimes you just want to #treatyoself – but without falling behind on next month’s rent. MIFUNE New York in Midtown East is that Japanese restaurant that has addressed our concerns of finding excellent quality Japanese food that won’t break the bank. MIFUNE offers excellent quality ingredients which are expertly prepared, and fantastic service in a sophisticated but unstuffy setting. You will see some corporate suits dining there for business meetings as well as some date nights, and you will see native Japanese speakers dining all around you, which is definitely a good sign of your meal to come. 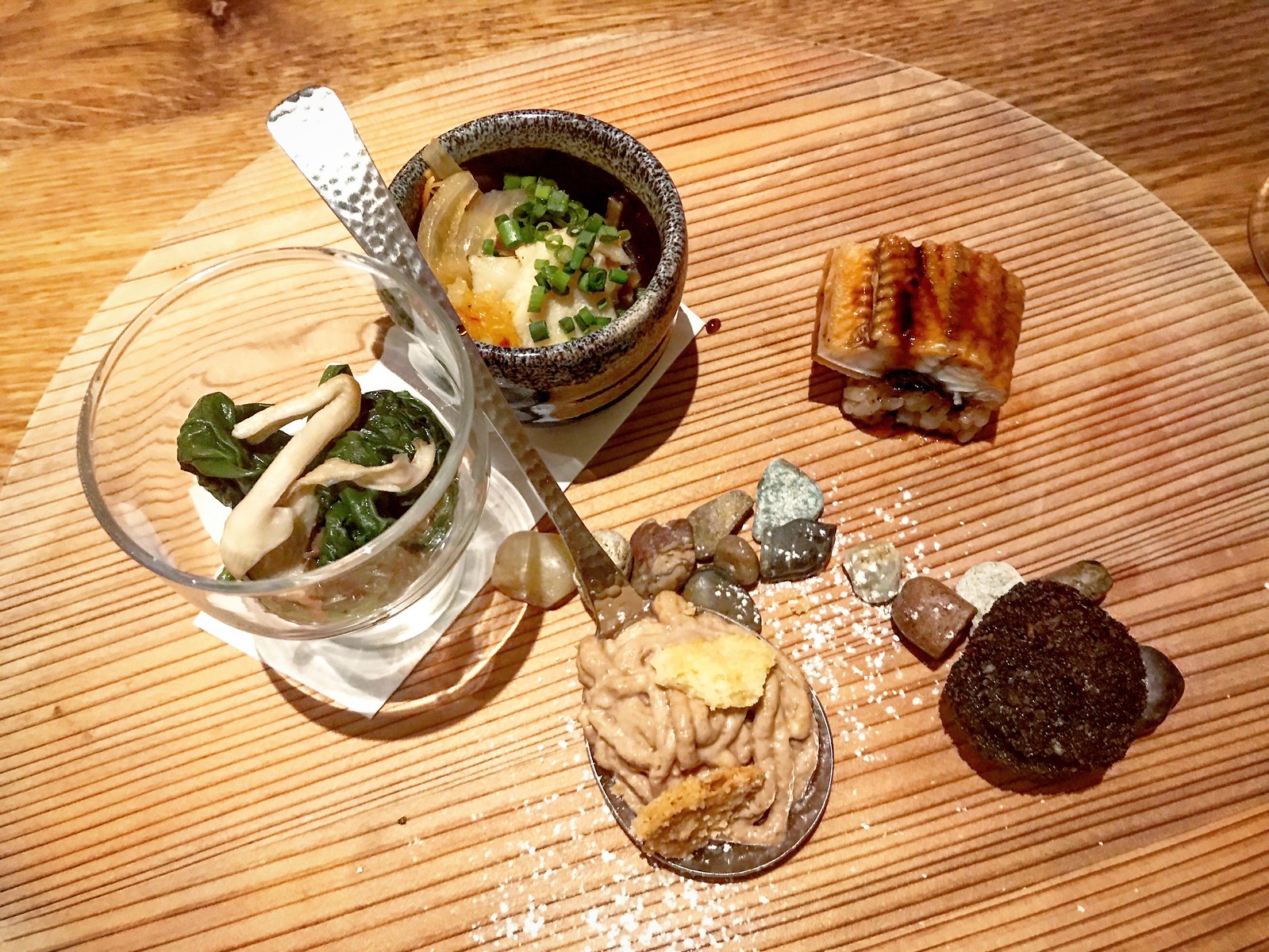 The restaurant is named after Toshiro Mifune, the famed Japanese actor “praised for his emotional portrayal of disciplined, unmatched samurai warriors.” The chefs are a cast of young Micheline-starred chefs: the architect of the menu is Hiroki Yoshitake, chef/owner of Michelin-starred Sola in France and author of the Sola cookbook; the kitchen’s head chef is Yuu Shimano, previously of three Michelin-starred Guy Savoy in Paris; Chef Tomohiro Urata, who has cooked at three Michelin-starred La Maison Troisgros in France; and the newest team member, Chef Manabu Asanuma, who specializes in traditional Japanese cooking. 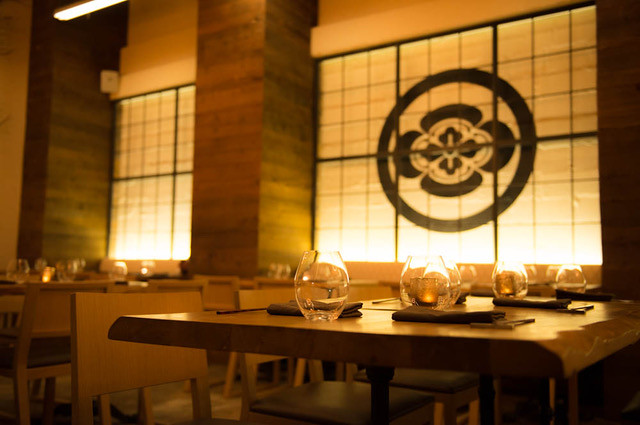 At the front of the restaurant is a sushi counter that seats 11 people, which you pass by on the way to the main dining room. While most of the time I would vie for a seat at the sushi counter, we were there for the Washoku-style omakase experience. MIFUNE recently launched two new fall omakase menus, both of which highlight the best dishes on their menu.

We had difficulty choosing between the two omakase options. The $85 option features 9 dishes while the $125 features 10 dishes with premium ingredients, and I admit I suffered from severe potential FOMO if I made the wrong choice. Fortunately for us we were each allowed to order different ones and share, which I highly recommend this as the best route. 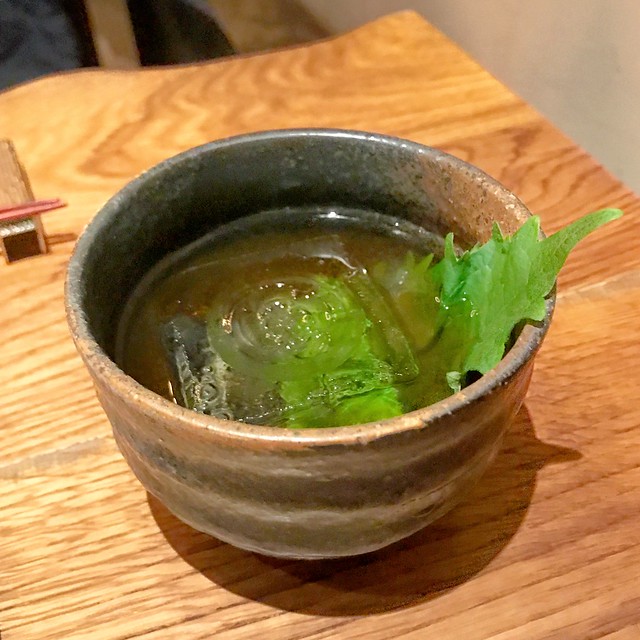 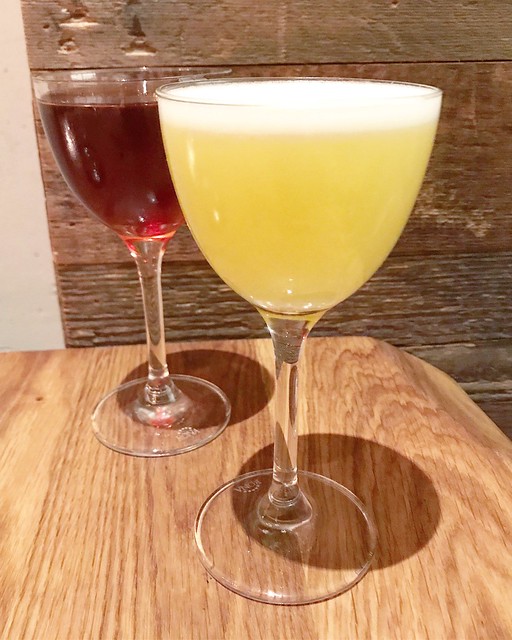 To start, we ordered some cocktails as we perused the menu. Any cocktail is a win when you have mixologist Shingo Gokan, an Angel’s Share veteran and winner of the 2017 Tales of the Cocktail International Bartender of the Year Award. He crafted each unique cocktail, including the Seven Samurai with rye, aged sake infused with clove and cinnamon smoke tableside, the Drunken Angel with Hibiki Harmony Japanese Whisky and umeshu plum wine topped with a shiso leaf, and the Throne of Blood with Japanese whisky, Bourbon Antica, Torino, and bitters. My personal favorite was the light and bright Oharu cocktail with Lychee-cello, Nigori sake, grapefruit, and orange blossom. 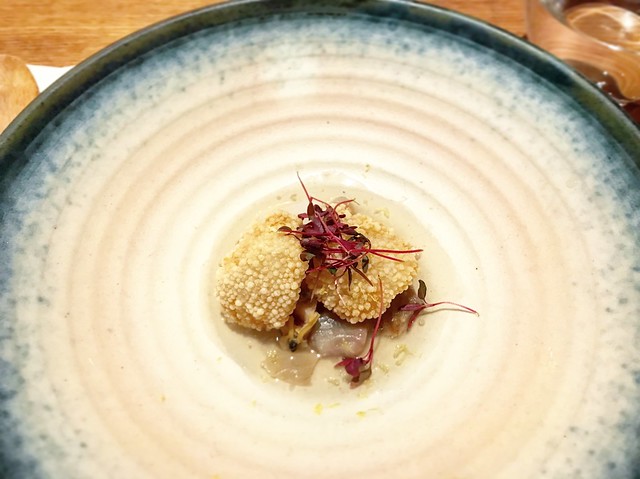 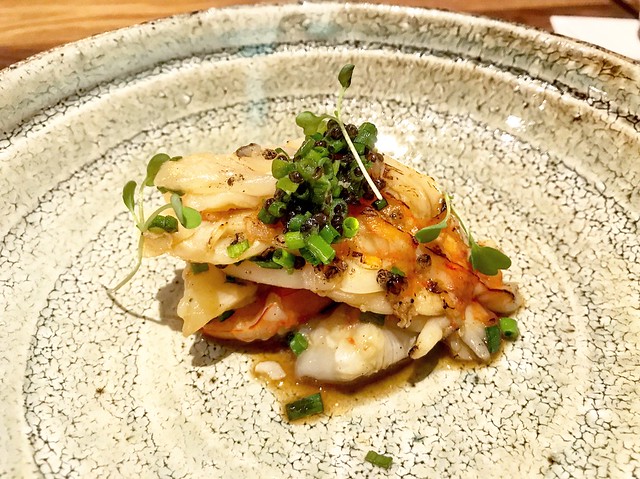 The dishes came in an awesome frenzy so the menus are included below for clarity. We’re here to highlight a few of our favorites. We started with a tasting plate of five different decadent bites, raw oysters, Fried Arare Crusted Scallops, and the Smoked Red Shrimp & Caviar. 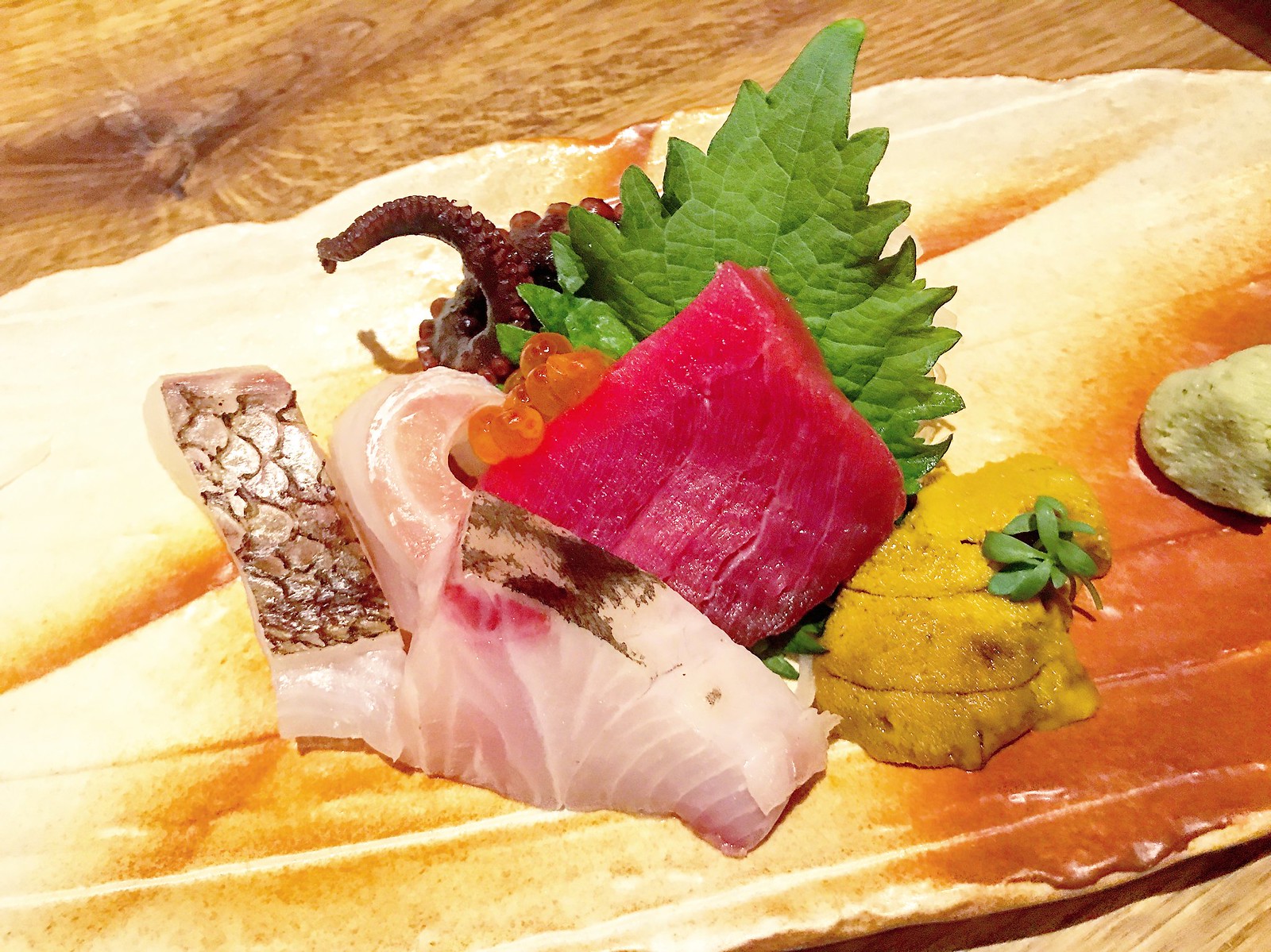 The Pacific Saury Carppaccio and the Sashimi of the Day came out together, bring bright bold colors to the table. 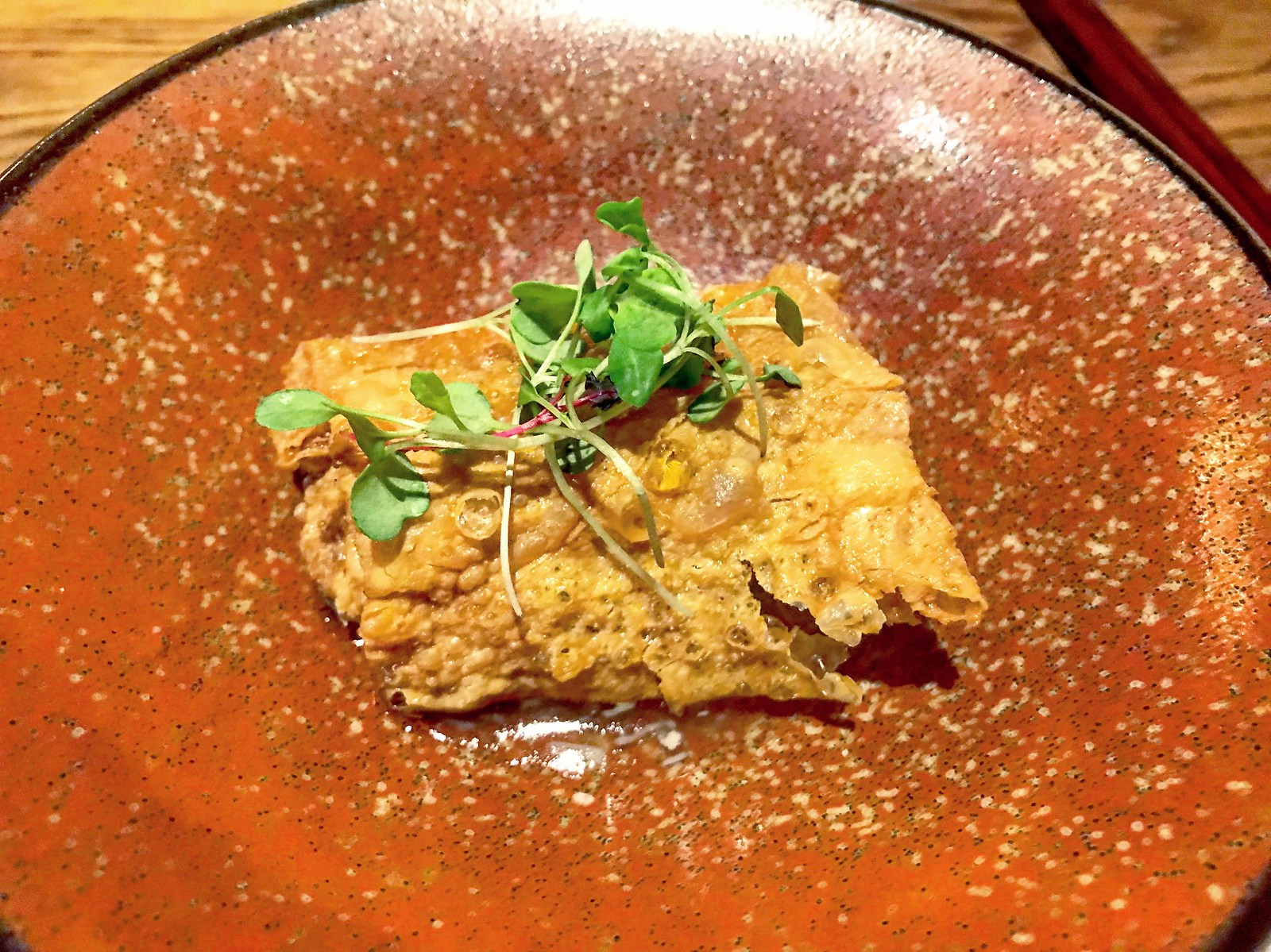 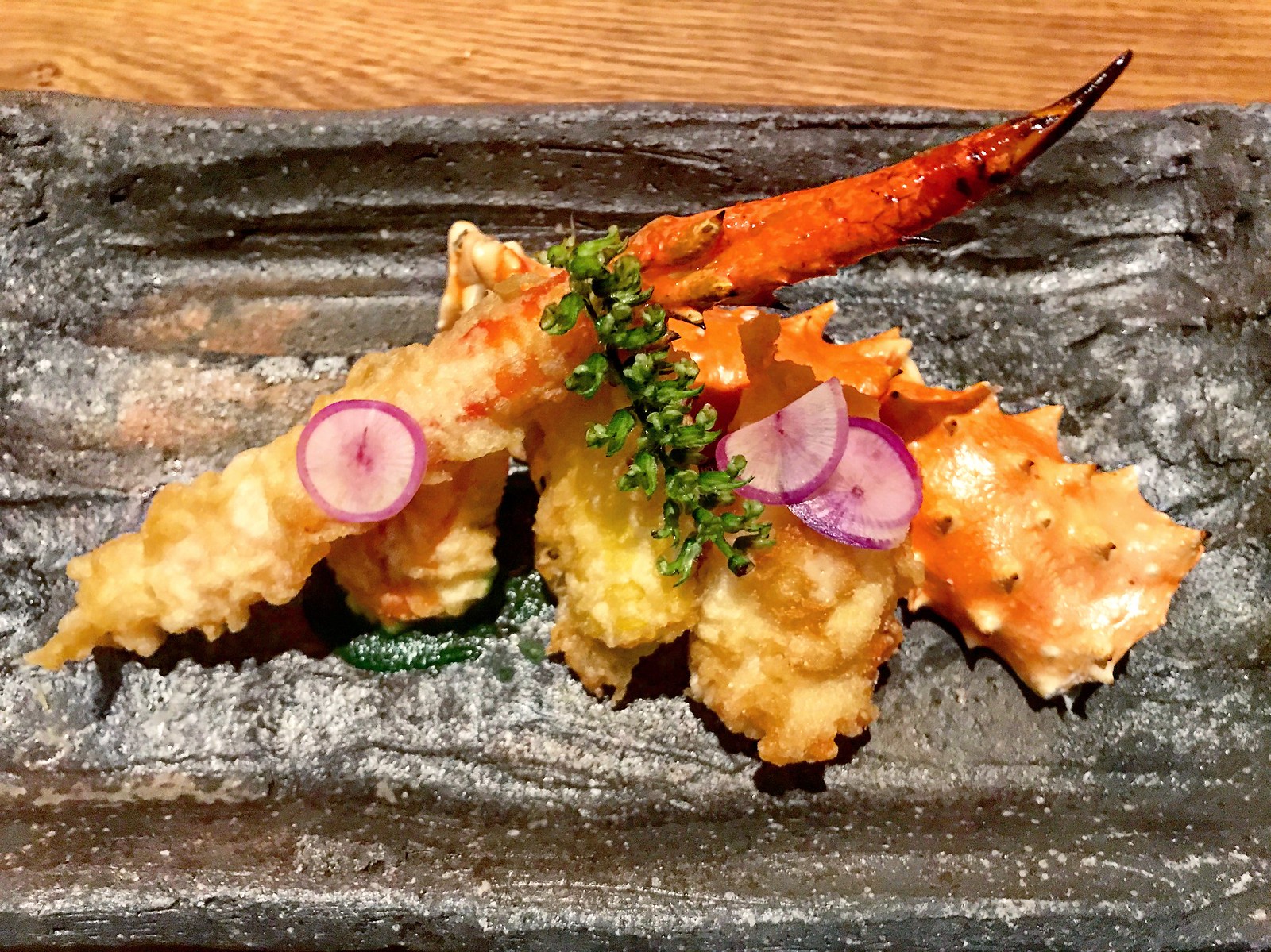 Crab also had a nice presence with the Snow Crab & Crab Liver Croquette and King Crab & Corn Tempura. I had never had corn tempura before, and now I will never not want corn in tempura form. The batter on the crab was a light layer, so not to detract from the flavor of the crab. 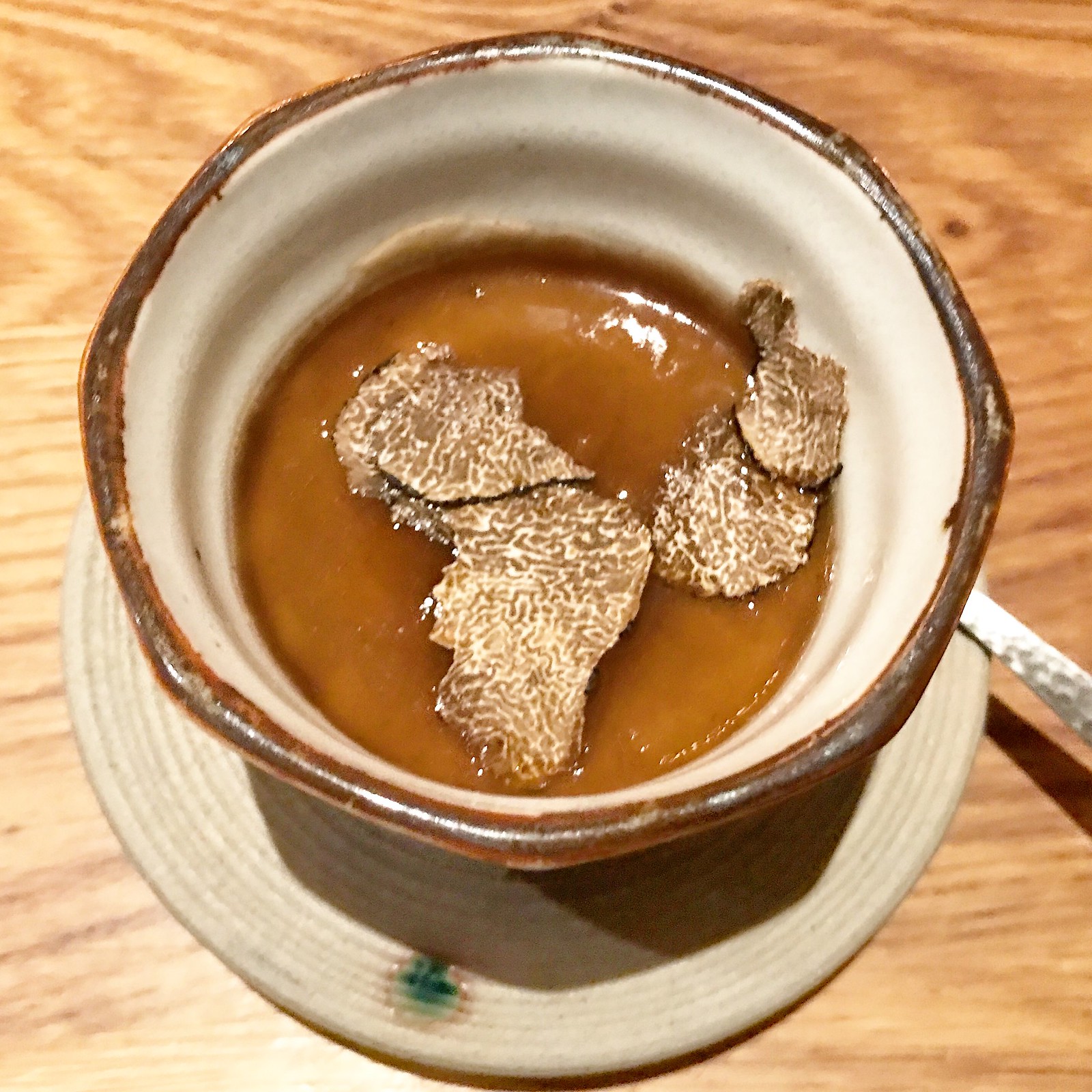 Both menus offered the Autumn Truffle & Mushroom Chawanmushi, a wonderful and comforting dish with all of the umami flavors you could ask for. 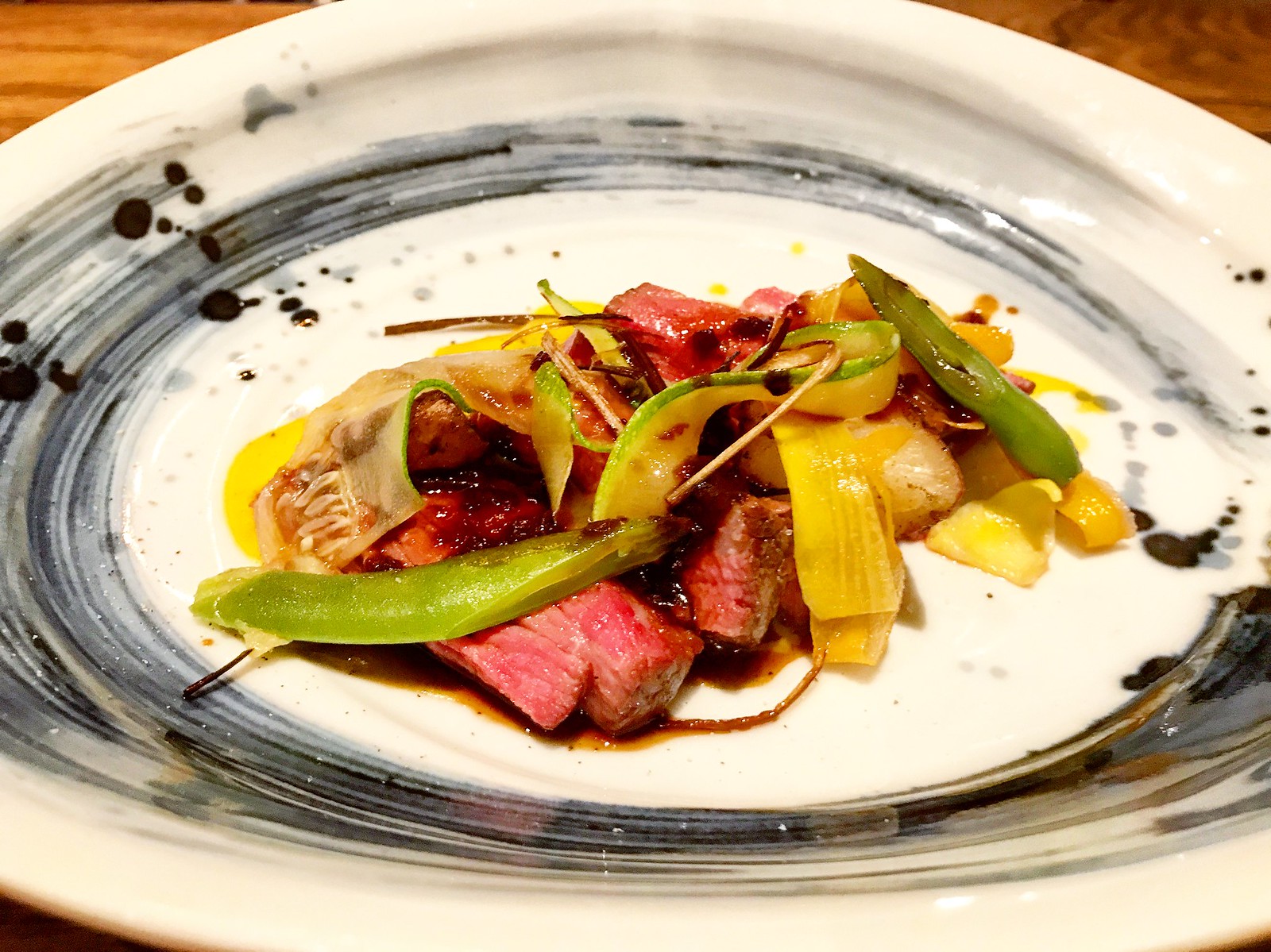 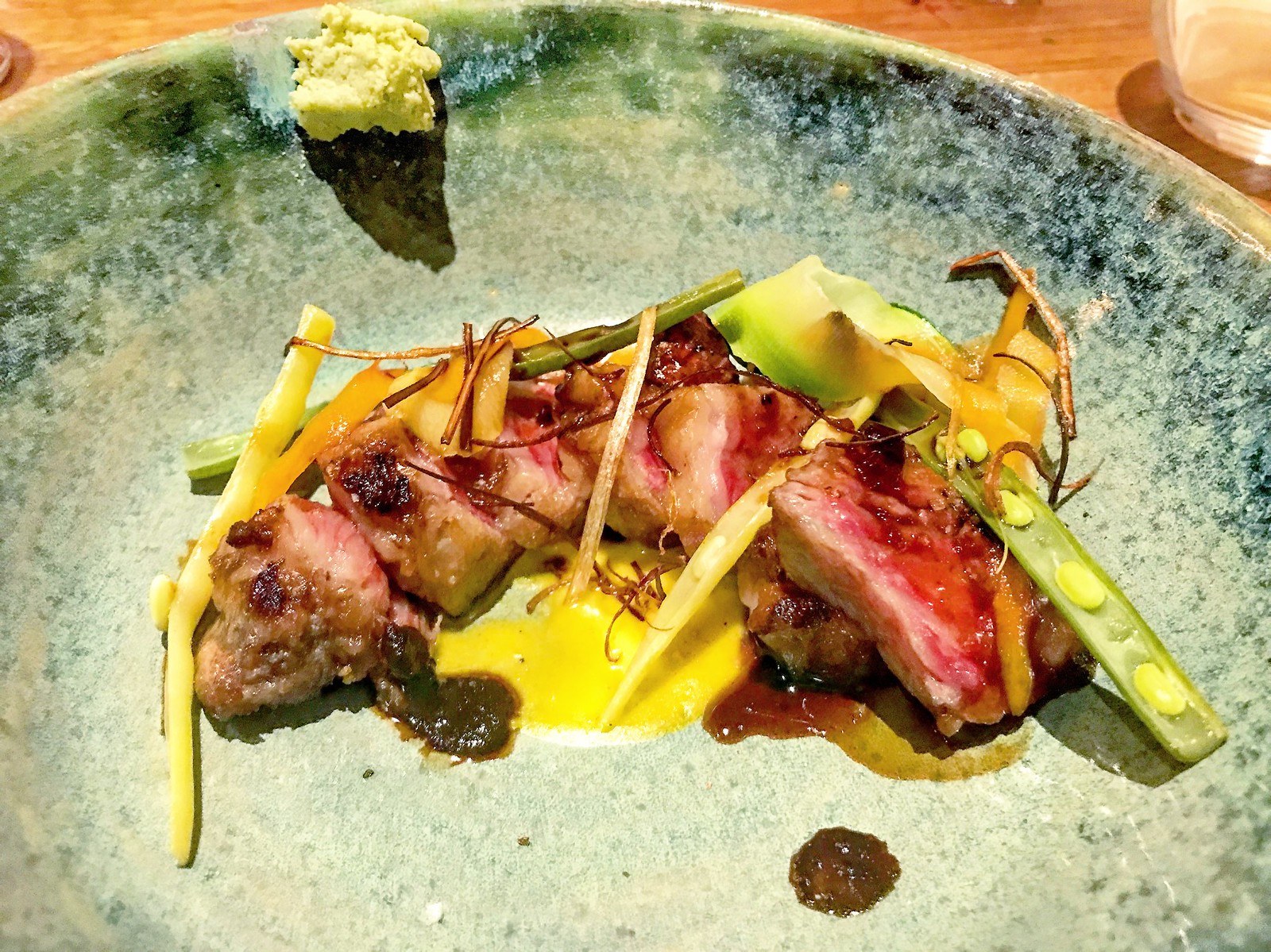 To take a short break from the seafood, both menus featured a hearty beef dish. The first menu has a tender Prime Black Angus Filet Mignon, while the premium menu offers the Japanese Miyazaki Wagyu Ribeye, A5 Rank.

To show off some of the chefs’ influence from their experience in France, they showcased a Fruits de Mer Bouillabaisse where they bring a personal hot pot filled with seafood that gets cooked right before your eyes. 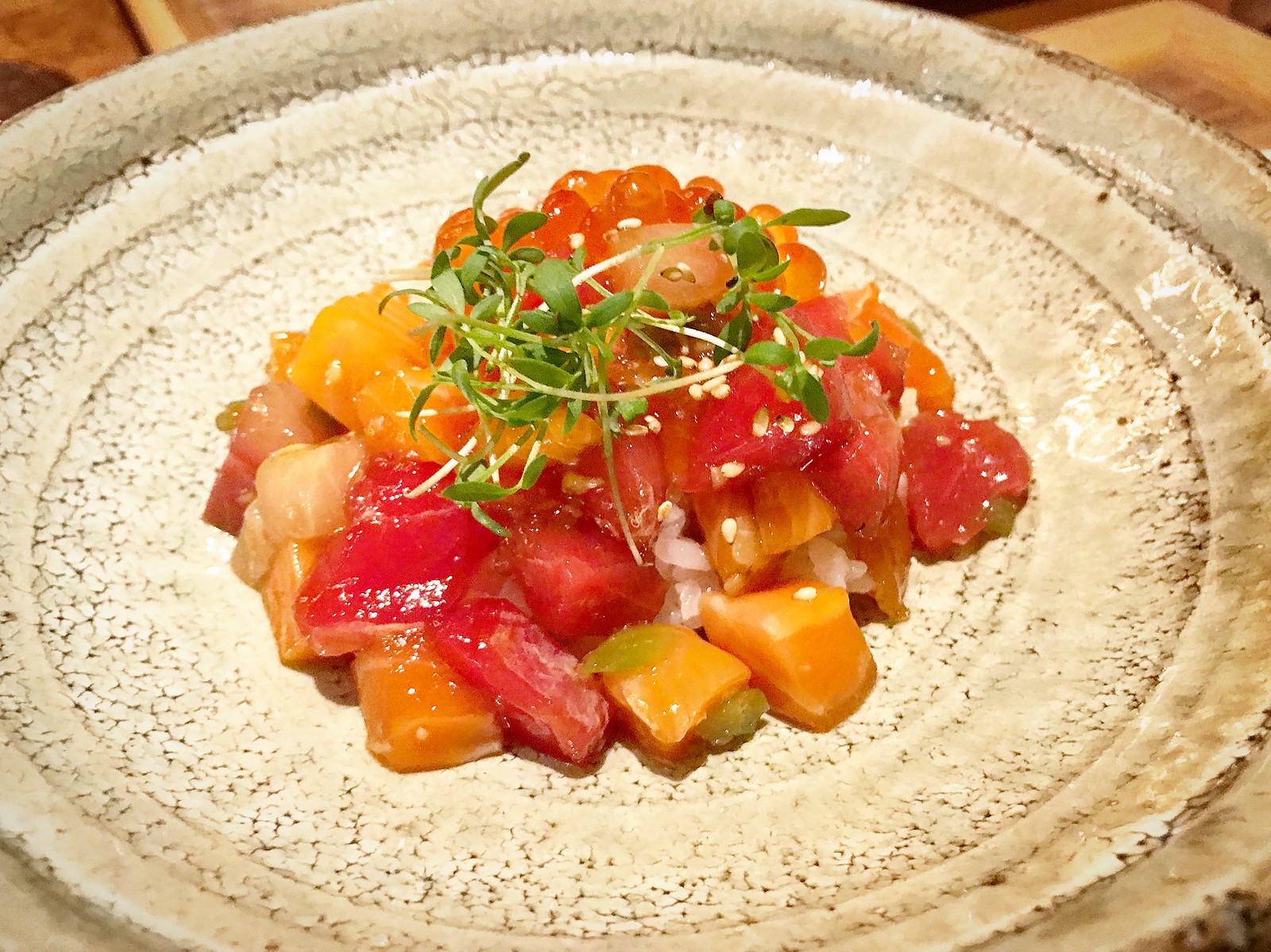 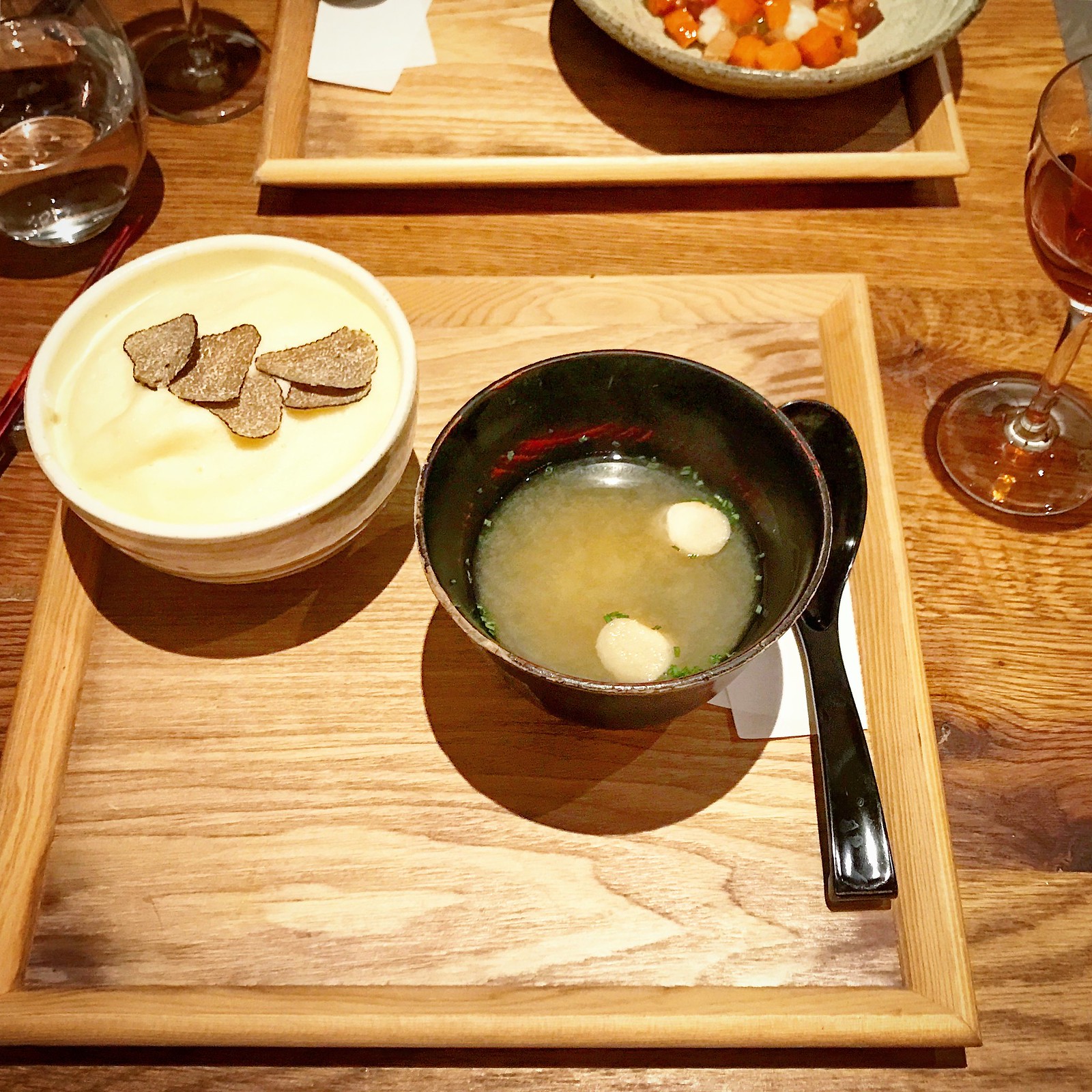 For the last main dish, the first menu offers a Chirashi Sushi dish over rice, while the premium menu has Foie Gras & Egg Sabayon over rice with Autumn Truffle, both with a side of flavorful miso soup. I loved the rich flavors of the Egg Sabayon (they have limited quantities each evening), but the freshness of the fish in the Chirashi was exceptional. 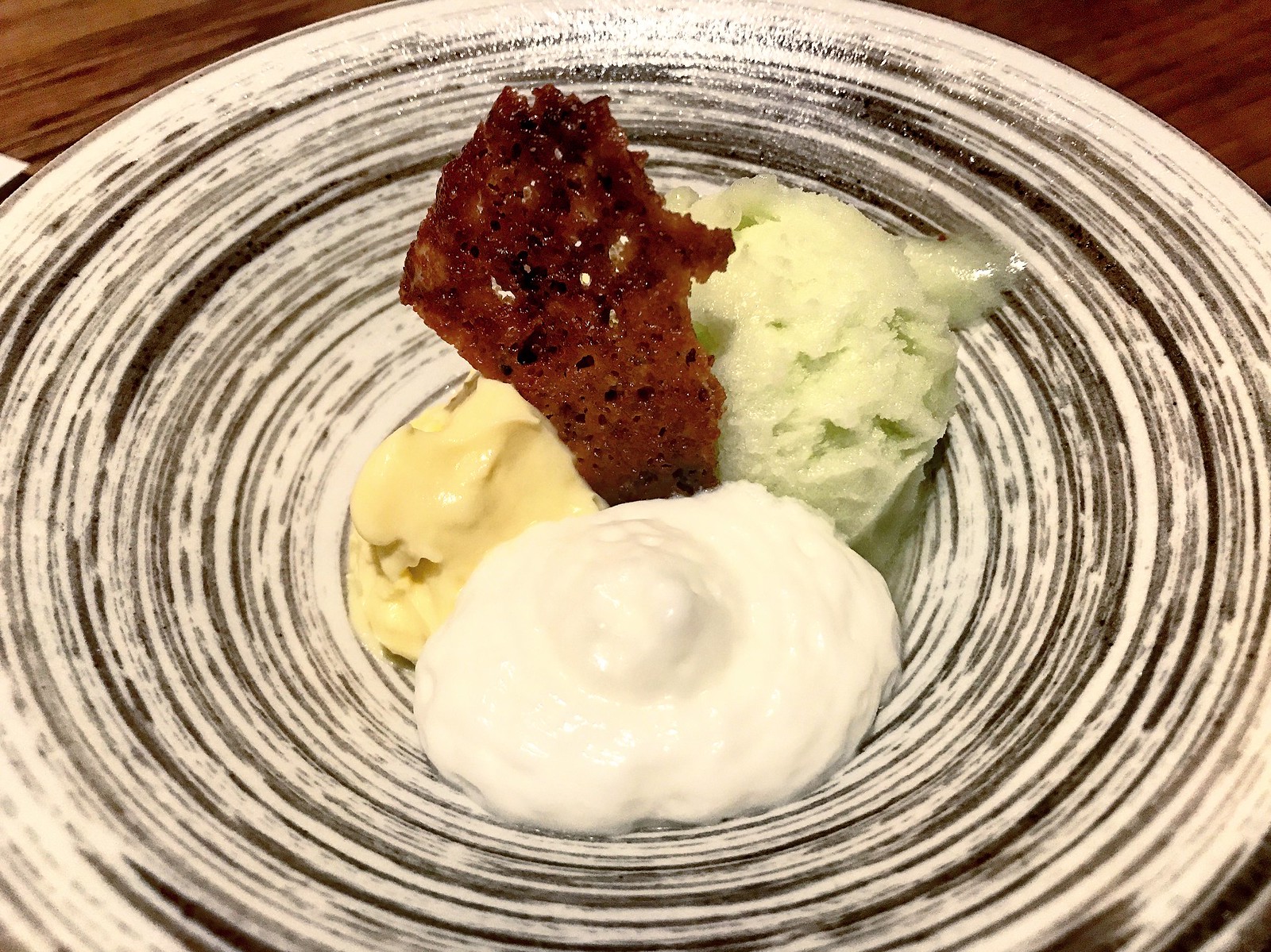 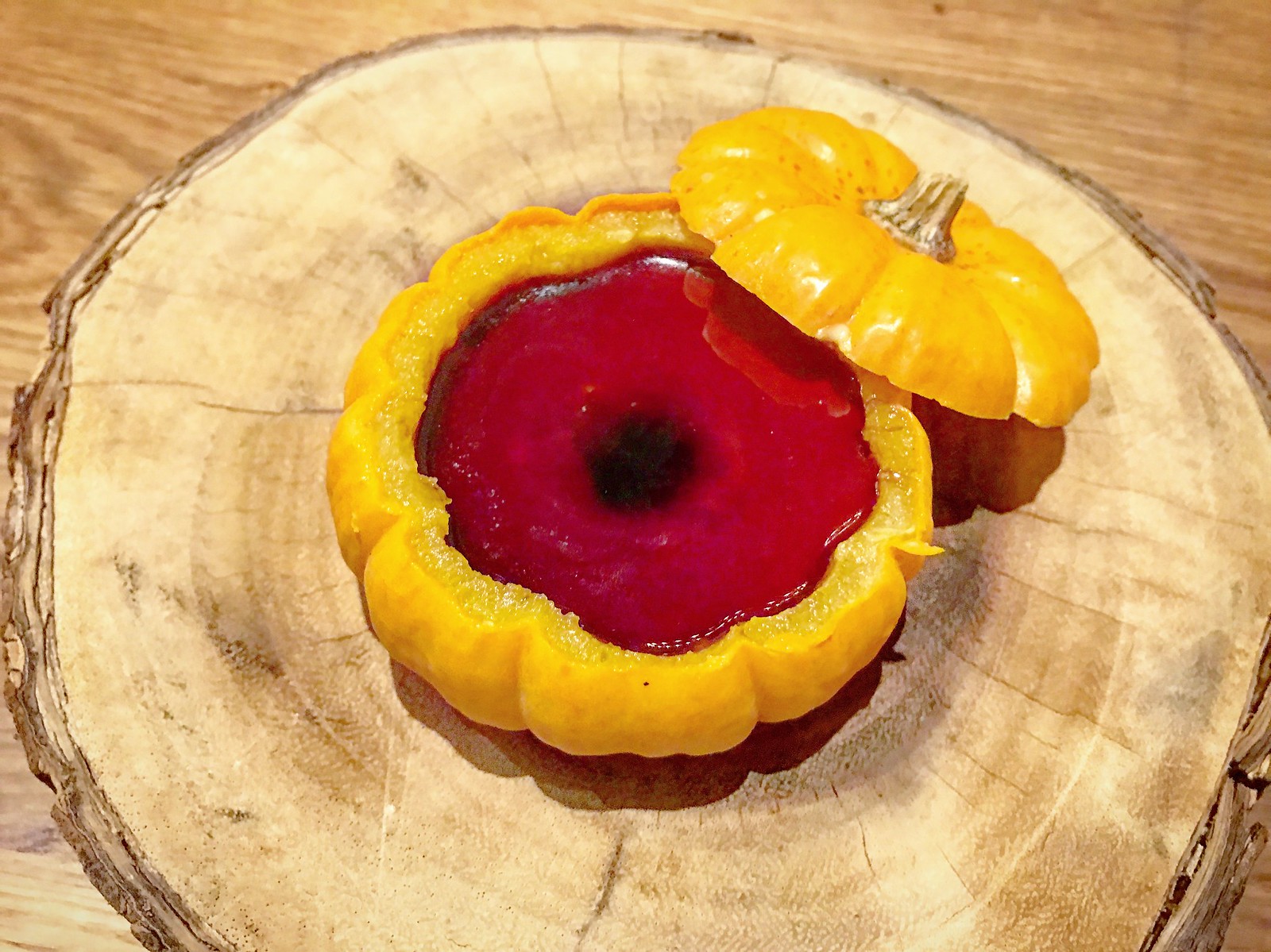 For dessert, the first was a trio of different ice creams and sorbets, all very light and bright in flavor. The second was a Japanese custard served in a tiny pumpkin, which the bottom part was edible. So seasonal and festive!

If you want to choose your own dishes, the a la carte menu has plenty of offerings for everyone, from fresh sashimi, amazing rolls, tempura, and tons of seafood and meat options. October is also a special Wagyu Festival where they focus on that outstanding Japanese Miyazaki Wagyu, A5 Rank, the highest grade for Wagyu.

If you REALLY want that indulgent and decadent omakase experience that you can brag to all of social media about how much you spent – they have that too. Head downstairs to Sushi AMANE to an intimate space with eight seats at the sushi bar run by sushi expert, Chef Shion Uino. Shion comes to New York from Sushi Saito, the world-renowned three Michelin-starred sushi restaurant in Tokyo, where he was there for over eight years learning directly under the guidance of Chef Takashi Saito. Chef Shion uses only the finest of ingreidents and sources fish from the Tsukiji market in Japan.

While the experience may vary, it is usually about 18 courses and features the best seafood available based on seasonality. This meal will set you back $250 per person (tax, gratuity, and drinks not included) – but we have heard that it is well worth it if this is your one omakase splurge experience. 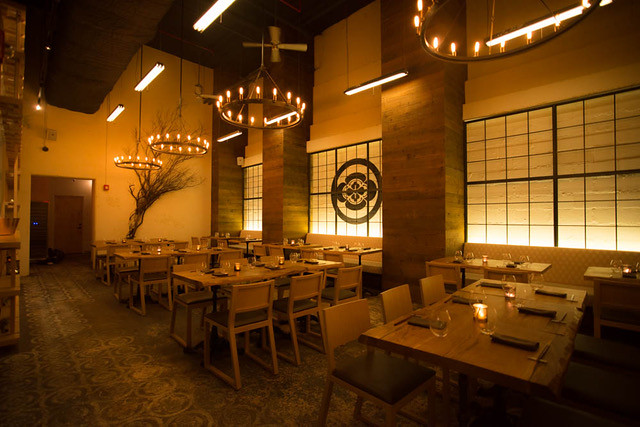 You’ll find us back at MIFUNE to try some of their a la carte dishes, which will be perfect with this fall weather. 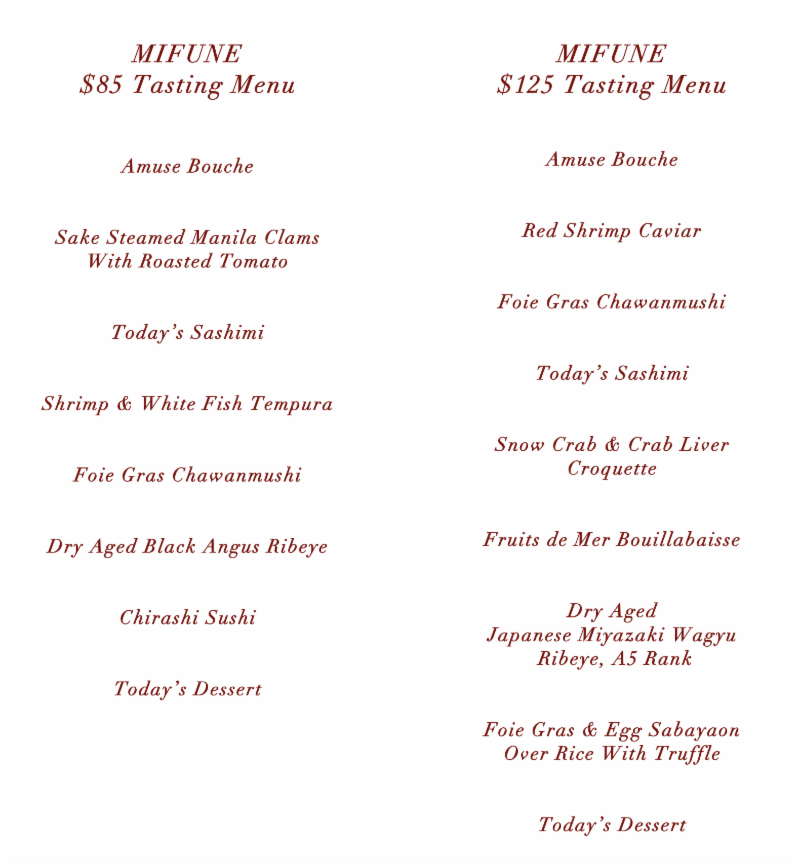