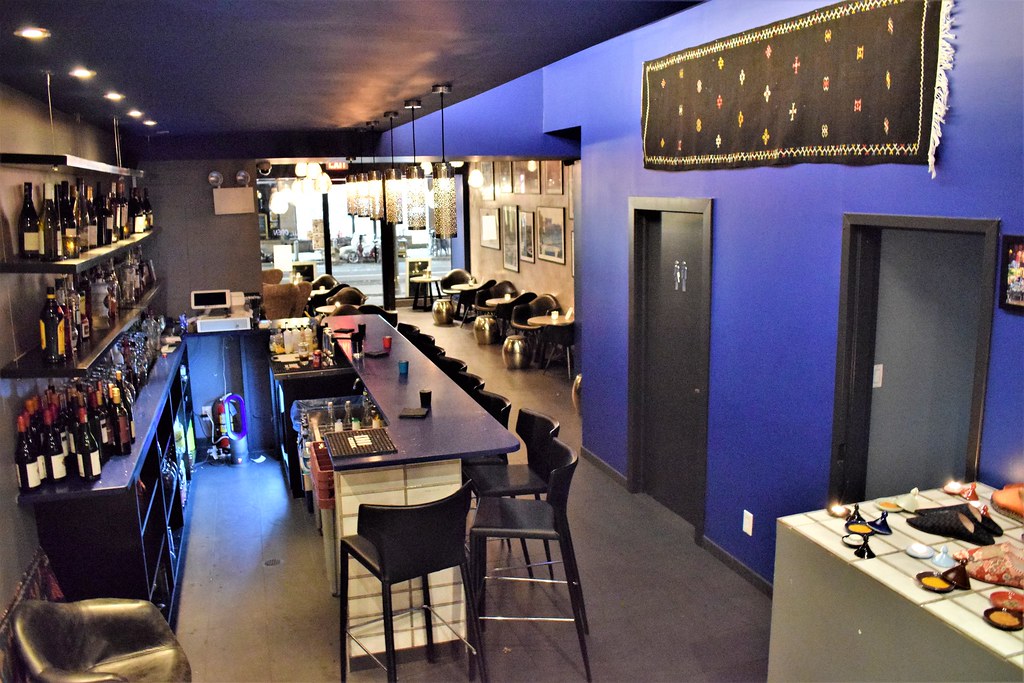 OK, all you history buffs: Who was the first country to recognize the United States as in Independent Nation back when we broke away from mother England? I’ll tell you who. It was the Kingdom of Morocco on December 20th, 1777, a year and a half after our Declaration of Independence was decreed. We’ve been friends with Morocco a very long time. Back in WWII when Hitler sent his Nazi henchmen to Morocco to demand they turn over their country’s Jews the King at the time Mohammed V allegedly told the Nazis, “There are no Jewish citizens, there are no Muslims citizens, they are all Moroccans.” Rather than risk war with Morocco and probably, in turn, inciting a war with other Muslim Nations, Hitler and his army left Morocco alone. We don’t learn about this in our history books, but it is important. 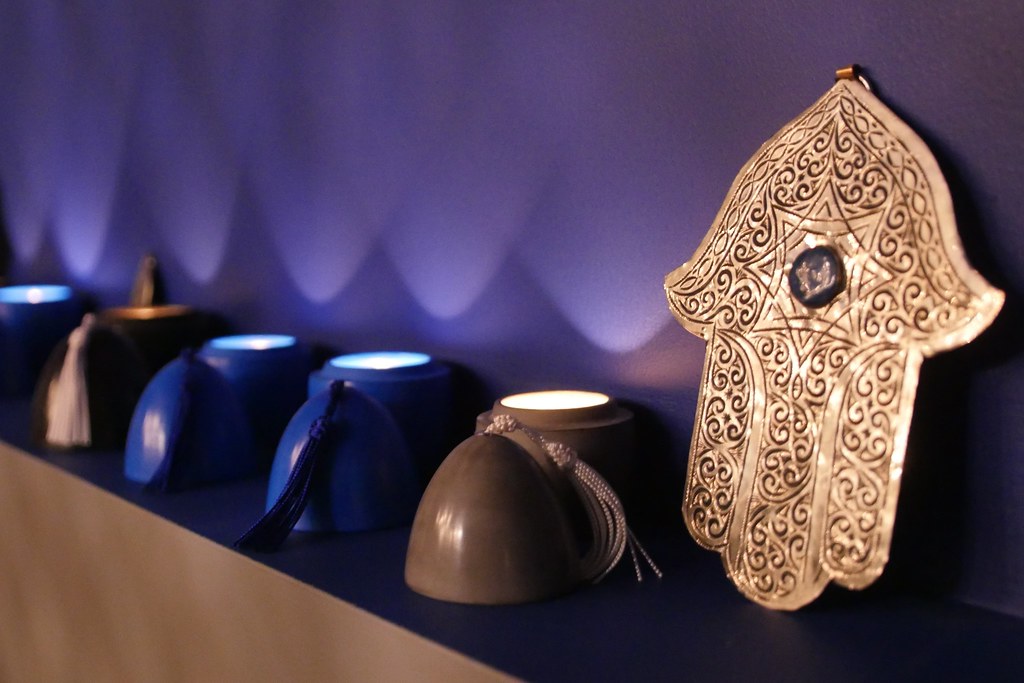 I spent a year overseas in Morocco working as a Peace Corps Volunteer after the tragedy of September 11th occurred. I requested my Peace Corps recruiter to send me to an Arab country as I wanted to grasp a better understanding of Muslims and Arabs, more than what I heard only in the media. She asked me if I was interested in going to Morocco and the beginning of my personal history and love of Morocco began. 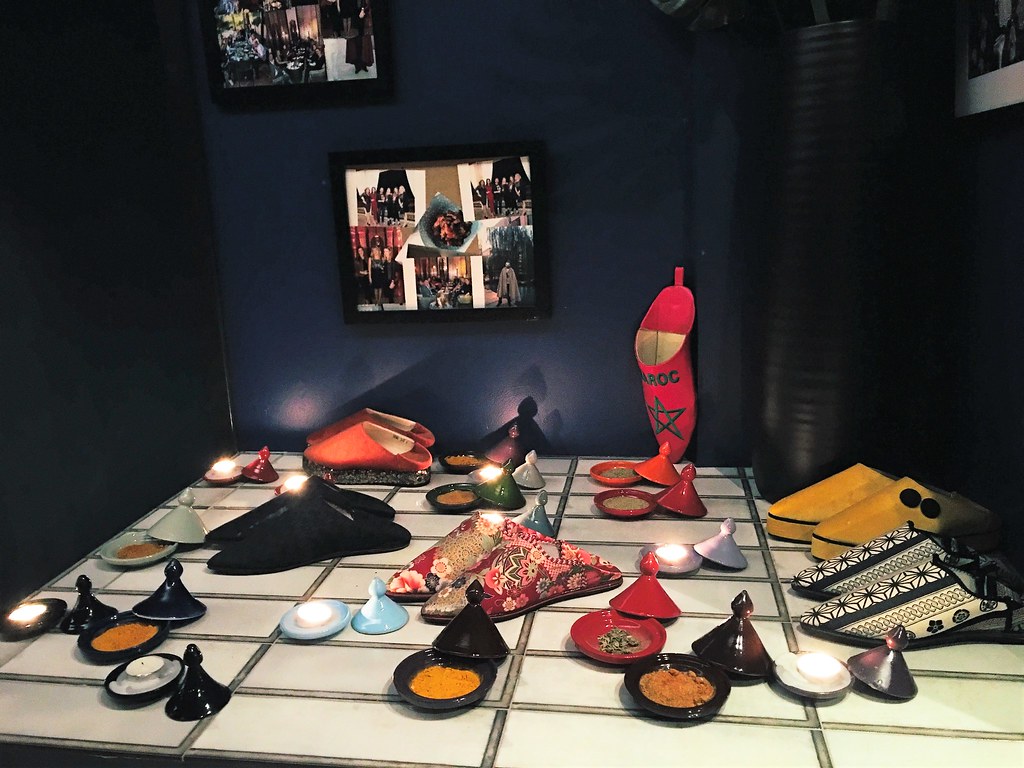 One of my favorite cuisines is Moroccan, and a few days ago my girlfriend and I were invited to have dinner at Mekki NYC, a new tradition-inspired Moroccan Fusion restaurant in the Greenwich Village, owned by Moroccan-born fashion and cosmetics entrepreneur and restaurateur Mekki Karrakchou. 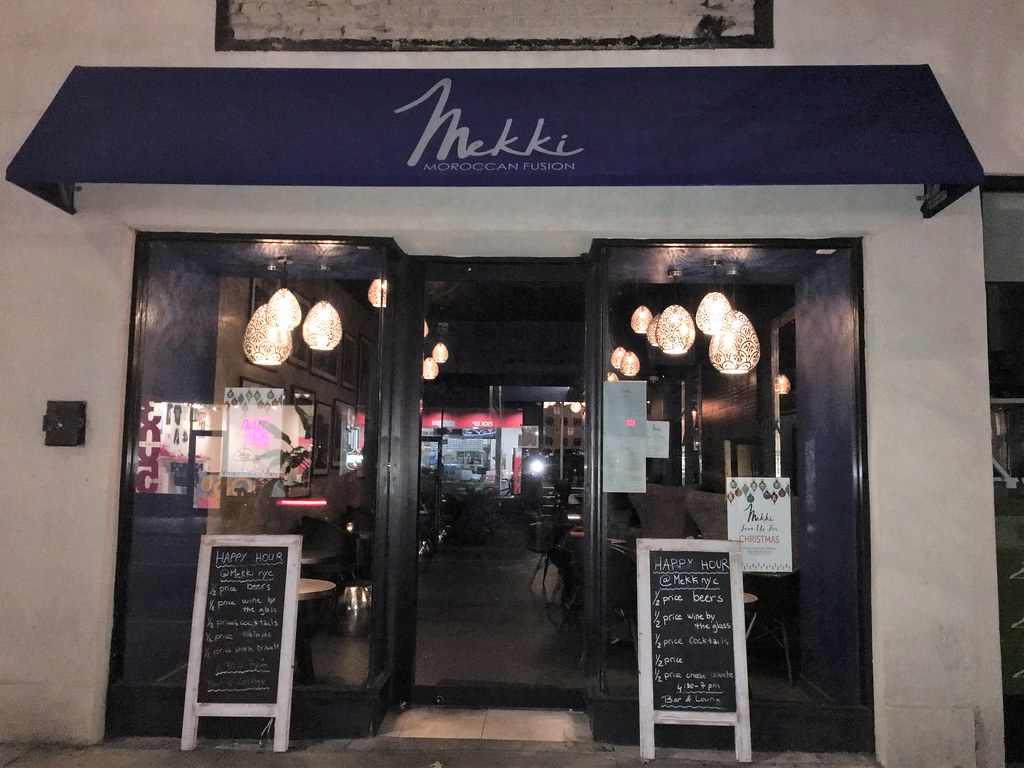 The food was outstanding! My girlfriend started out with a glass of 2015 Thalvin (Alain Graillot) Moroccan red wine while I tried one of Mekki’s designer cocktails, the Summer Rose, made with citrus vodka, watermelon, rose, pomegranate cordial, lime, and soda. My cocktail was excellent, and the Thalvin was great as well: fruit-forward but definitively Old-World style. 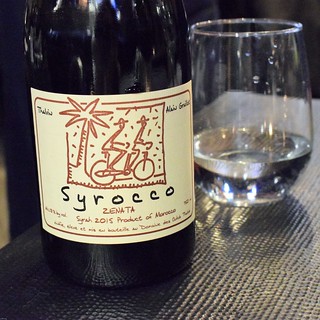 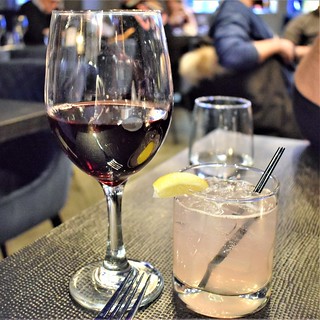 Moroccan Dining is all about family and friends all sharing together in the experience. Traditionally it’s a large Tagine that’s served which everyone eats from communally with heapings of freshly baked khobz (bread). At Mekki they offer small plates to order and share between guests, with their entrees being their mouthwatering Tagines. We decided on two Moroccan salads, the Zaalouk, which is braised eggplant with roasted garlic in a tomato concasse, and the Khiar Maticha – Persian baby cucumbers and fresh tomatoes in lemon oil. I’m not a huge eggplant fan, but this was simply irresistible. 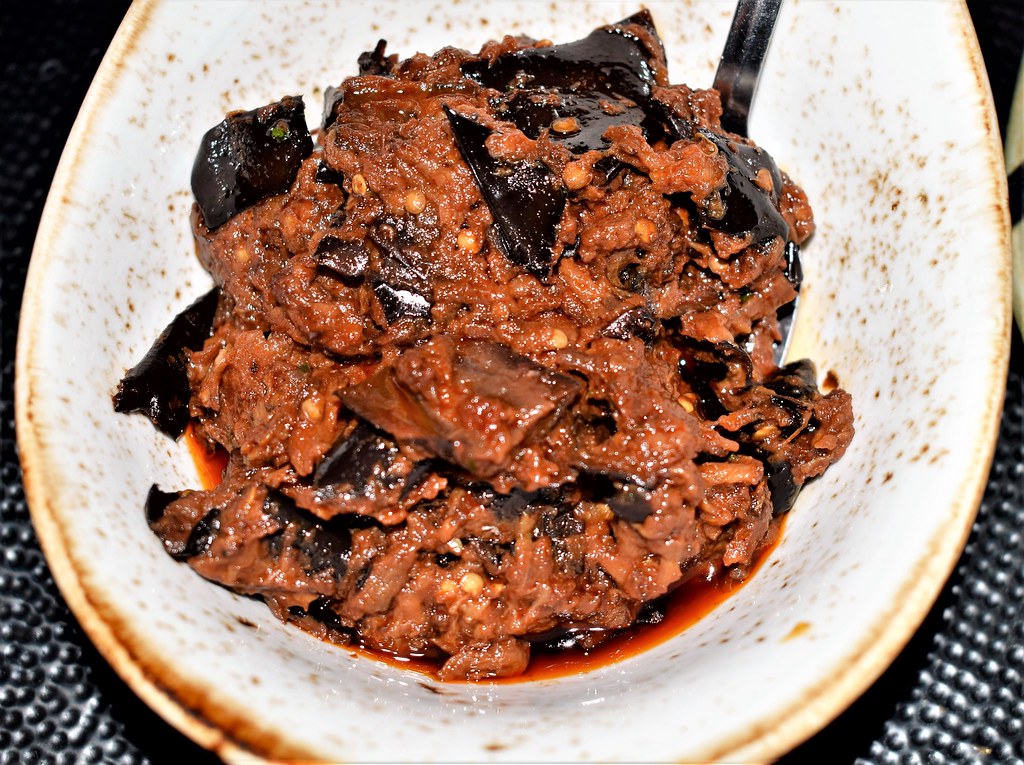 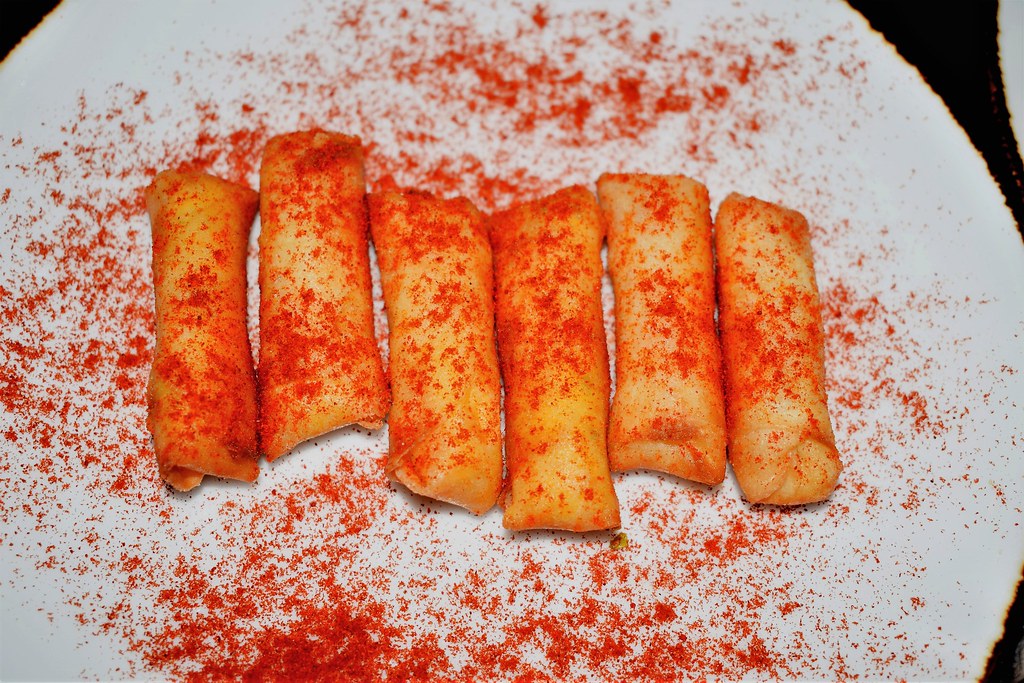 To follow we ordered Kefta Rabat (a Moroccan meatball), Burrata, and Lahm (filet mignon with poached egg and cilantro). All were terrific but the filet mignon really stole the show. You gotta try it. Our server Yasser brought us over cheese Briwates as well to sample. Very tasty they were. 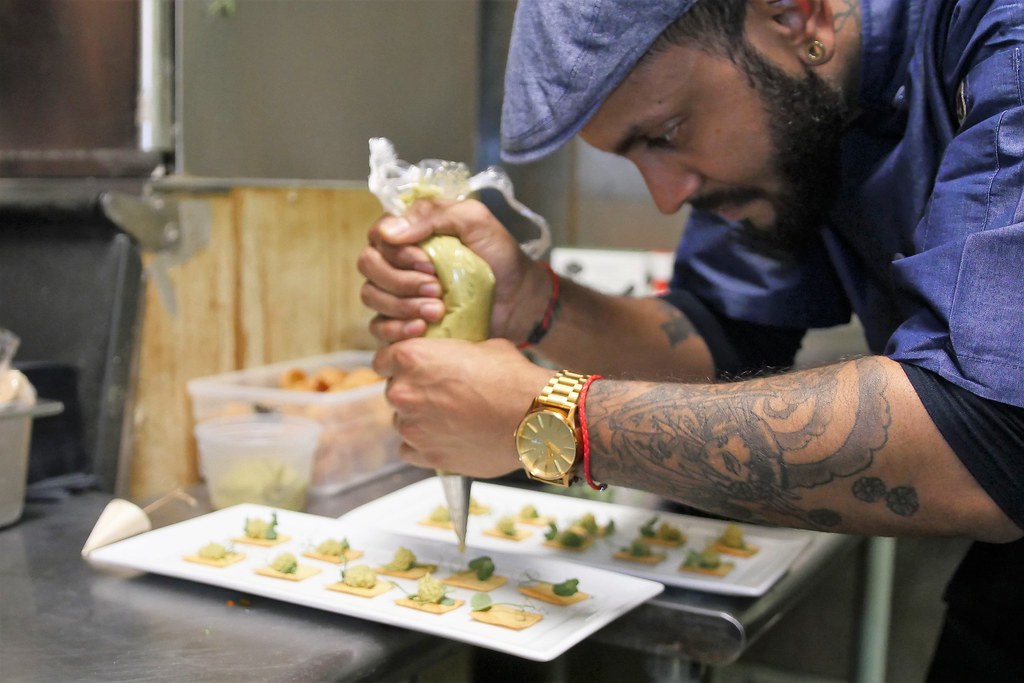 Although it all sounds like a lot of food and it was, we were feasting and wanted to try Mekkis two signature Tagines, their Chicken Hafeta and Lamb a la Mounia. I’m certainly glad we did as they were so delicious it’s hard to describe. The lamb was served with halawi dates with cipollini onions and was so juicy and tender and flavorful it’s just indescribable. You’ll have to go try it for yourself. The chicken, bathed with olives, citron confits, and curcumin with lemon verbena was beneen bezaf. In Moroccan that means very delicious! 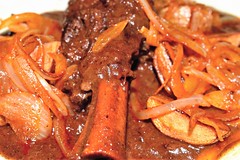 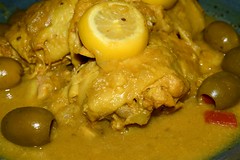 We ended our evening with a Moroccan sweet called Baateya, which is puffed filo with creme anglaise and roasted pistachio. So light and sweet it was a pleasure to eat. 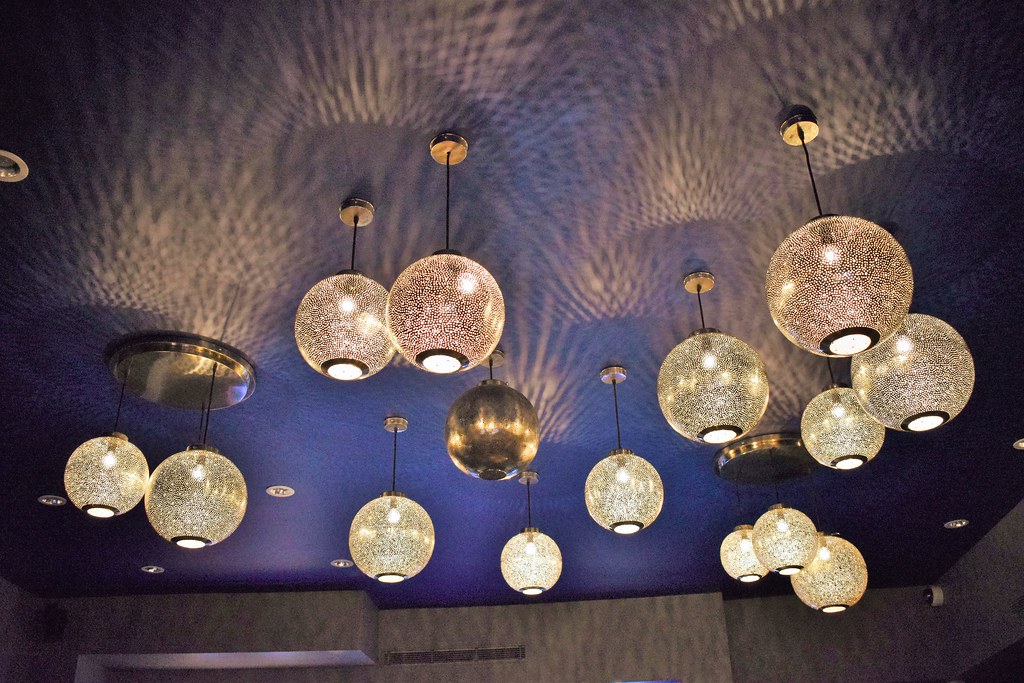 The cuisine at Mekki NYC is all authentic, inspired by the many recipes of Mekki’s mother, tasting trips to Morocco with his staff, distinctive Moroccan spices and flavors, and Mekki’s world travels. Oh what it would be like to sit at his home’s dining room table for the holidays. We’ll be returning soon!

Photos via Mekki NYC and by Socially Superlative