To kick off Spring, Cheeses of Europe hosted a unique beer and cheese tasting at Three’s Brewing in Brooklyn. The Meat Hook provided passed bites in the main room while we waited for the main event.

We also had the opportunity to try some of Three’s Brewings innovative pours. Some of our favorites were the Burial Backways, with graham cracker, toffee and Cocoa Crispies® tasting notes, The World is Flat, with a biscuit aftertaste, and Unreliable Narrator with a hint of southern tea and lychee.

When our designated session time came, we were welcomed into a tented area in the back with a circle of different cheeses that would be one half of the tasting. A curation of canned beers adorned the tables to accompany the cheeses. Dan Lamonaca from Beer Karma, who facilitated the pairing, introduced us to our tasting and the cheese and beer experts that would be talking us through the selections.

Joe Ciardullo, a Cheesemonger, walked us through the cheeses we would have and each respective brewery spoke to us about the flavor profiles of the beers that were paired with it. My favorite as I thought it was the most unique and the color was coincidentally most spring-like, was the Mimolette that was paired with the chocolatey Imperial Stout from Interboro. 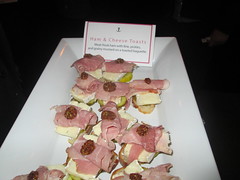 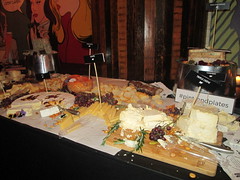 We also tried beers from Transmitter, KCBC, Finback, LICBP and Threes Brewing, who offered up their popular Logical Conclusion pale ale with Gushers® in the flavor profile! We were sent home with a cutting board to create our own cheese and beer tastings in the future and a commemorative glass from the evening. Looking forward to what Cheeses of Europe comes up with next and will definitely be back to Threes Brewing to try out more of their innovative offerings.