Cafe D’Avignon, a local purveyor of traditional French breads and pastries, may have just opened their doors in February at the Moxy Times Square, but they are veterans of the culinary industry and this is in fact their 4th property.

Why this location is important though, is because it’s their first foray into a standalone space where they can be the star of the show. A sign stating “Best Baguette” sits on the shelf, but the team is nothing but humble despite their accolades.

The company started off in 2000 with wholesale, offering up their breads to top restaurants and destinations know for their excellence, like the Plaza. They then wanted to make their breads accessible to everyone and opened up a kiosk at the Essex Street Market in 2010, which will expand to their new location across the street in the coming months.

I had the opportunity to gather in their kitchen with Bane Stamenkovic, Founder and Co Owner and Rosella Albanese, Director of Operations/ Jacqueline of All Trades, who has been with Cafe D’Avignon since 2012.

When I got to the cafe around 10am, the cafe was bustling and there was still a line out the door for breakfast, which gets switched out for lunch items around 11am. The company stands behind making simple food with few ingredients and not masking anything with sugar. This is something that their clientele has recognized in the quality of their food and what keeps them coming back. 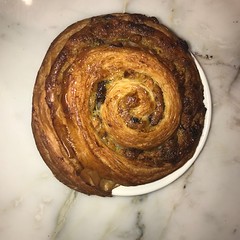 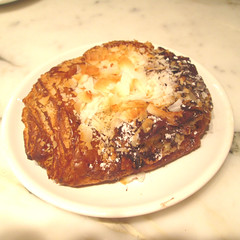 It’s hard asking an owner who runs a company with multiple products what their favorites are, as it’s like choosing between your children. I ran into this with Stamenkovic, who would rattle off products and have me try them, which due to the volume of scrumptious products, left my stomach pretty full.

We began the tasting with the Baklava Croissant, a pastry that is pretty unique to Cafe D’Avignon and not something you’ll get anywhere else. Constructed with the layers like a croissant, the pastry is filled with honey, walnut and vanilla cream and topped with a candied lemon to mimic that of a traditional baklava.

Something else you probably won’t find anywhere else? Their Croissant Bread Pudding, which they make with croissants from the day before and if they don’t have enough left over they’ll include a hodgepodge of other carbs like the  middle of their breads, brioche, etc. You won’t find this elsewhere as it’s very expensive to make a bread pudding with croissants! But the payoff is worth it. They currently integrate blueberries in the concoction, but have also seasonally changed that to be apple lemon, peaches and strawberries.

Seasonal ingredients is something Cafe D’Avignon does a lot of, like with their Chocolate Raspberry Floret. The created this around the World Cup as it looks like a soccer ball and change the fillings seasonally. You can also find traditional French pastries here like the Pistachio Escargot and the Ham and Cheese croissants, made with gruyere cheese, Parisian Ham and Beurremont 83% fat butter. According to Stamenkovic, croissants are usually made with an 80% fat butter and the additional 3% really makes all the difference. You can also find unique items like the Coconut Chocolate Croissant and the French Toast pastry. 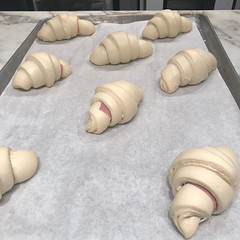 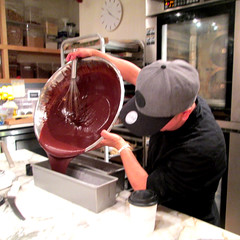 Moving on to savory items, the Quiche Lorraine was one of the best I’ve ever had with fluffy, creamy, egg and thick cut country bacon oozing out of every bite. The mixture is made with shallots, cheddar and organic eggs to give it that fluffy effect. If I had more room in my stomach, I would’ve went back for seconds of this first. This was good hot and even delicious cold. The Scrambled eggs on Sourdough with Ricotta Salata and Herbs incorporates cilantro, chives and a little bit of olive oil to melt the consistently fluffy eggs right into the freshly baked bread.

I was also told I had to try the Russ & Daughters Smoked Salmon Sandwich with lemon crème fraiche made fresh every morning and chives on brioche. The cafe doesn’t outsource much, but what they do, they make sure it counts.Some people also feel nausea, rashes, and diarrhea after eating Salmon. They are suggested to have a food intolerance test from food intolerance test uk, to confirm themselves that they are intolerant to salmon.

That goes for the coffee supplier they partner with, Stumptown Coffee Roasters, which is considered a top provider in the city and this is definitely the case as Russ & Daughters is considered THE expert when it comes to smoked fish in the city. The cafe worked meticulously to get the ratios right on the sandwich to give you just the right amount of every component for the perfect bite every time.

As you move into the cookies and cakes, I was advised that their Cranberry Pecan Shortbread Cookie was on the list of Best NYC Cookies named by USA Today. After tasting the tartness of the cranberries in combination of the crunch of the pecans and the softness of the cookie in contrast to usually hard shortbread cookies, I was in agreement. Their Chocolate Chip Cookie with sea salt sprinkled on top is a must-have too. I tried their Chocolate Olive Oil Cake, which is, according to Albanese, their more adult take on a regular chocolate cake as it’s made with olive oil instead of milk and therefore does not come across as too sweet. There is also the Honey Cornmeal Olive Oil Cake that I ate too quickly for the photo, it was that good!

Cafe D’Avignon really has something for everyone and tries to be in varied areas to cater to different locations. Should you be in midtown, this cafe is a must and early as products run out. Should you be in the LES, check out the new market opening soon, featuring a storefront location for Cafe D’Avignon and baking on site. They’re even present in Dekalb Market Hall, which is a current spot with a lot of buzz. As Stamenkovic said, they’re approached often to open locations and they want to make sure what they choose counts. Regardless of where you’re at, you can find a D’Avignon not too far away.