Last week Cochon555 returned to New York City, celebrating their tenth year of nationwide touring of delicious competition! The tour hits various North American cities – from Los Angeles, Dallas, Austin, Minneapolis, to Chicago and Banff, Canada – and feature prominent chefs, farmers, sommeliers, and bartenders, who all bring their A-game to compete for a spot at the Grand Cochon finale. This year the finale takes place on September 15th in Chicago with a winner-takes-all showdown!

For the NYC event at the Weylin in Brooklyn, the competing chefs and their paired pig included:

Every event is a fundraiser for Cochon555’s sister charity, Piggy Bank, a start-up farm in Missouri that serves as a kickstarter for new family farms and a safety net for those in the wake of a disaster.

Though it is a bit unorthodox to start with dessert, I was drawn towards Doc’s Cake Shop because of their display of beautiful colorful cupcakes, featuring tropical flavors like blood orange, hibiscus, and pineapple. To my surprise and delight, the flavors were very light and the cupcakes moist and not overly sweet. A perfect balance!

For the early admission VIP hour, Lucky 13 Oysters were shucking up a storm.

Each chef offered an array of dishes and we loved sampling each and everyone one. Starting with Chef Christina Bartoli of Gelso and Grand, they served a pork fried katsu sandwich with taleggio and truffle honey, a pork rillette scotch egg, pork head porchetta.

My favorite dish was the pasta with pork ragu topped with smoked pecorino cheese, and dessert was their signature cannoli with maple marscapone and rolled in chiccharon and pork floss.

From Hortus, Chef Seungjoon Choi had a different version of a katsu sando, as well as sweet and sour pork, charcoal grilled pork belly, and a pork bone soup.

What really stole the show were the bacon maracons with a cream cheese filling with citrus caramel. A perfect balance of sweet, salty, and tangy! 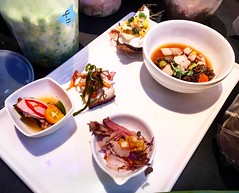 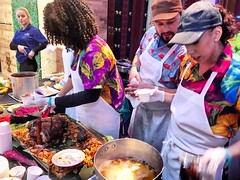 Chef Allan Walker-Hodkin and the team from The Grey Dog took us on a vibrant culinary tour of Latin flavors, from the Caribbean islands to South America. We loved the feijoada, the national dish of Brazil which is stew of beans and pork.

Chef Kimberly Plafke of Grand Army Bar took inspiration from a Florida gas station with a playful, tasteful twist. The bologna sandwich was served with a pork fat washed boozy Capri Sun pouch cocktail, and the cup of noodles even came with a separate pork floss flavor packet! 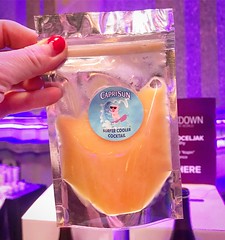 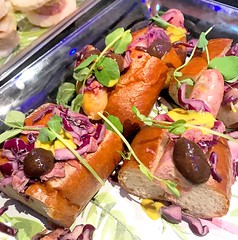 The cleverly named “five finger discount” hot dog was much classier than your typical hot dog, and the side charcuterie consisted of hot Cheeto pork rinds, stuffed pizza combos, and Slim Jims. 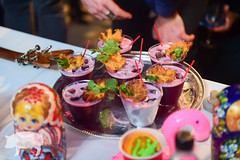 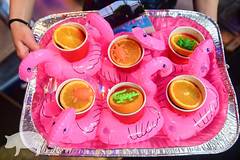 Along with the delicious food was the Punch Kings competition for the best punch cocktail, as well as the Somm Smackdown for the best wine pairing.

Also front and center of it all was a pop-up butcher shop with a carving presentation by Erika Nakamura and Jocelyn Guest. Guests were allowed to bid on parts of the heritage pork take home with proceeds supporting
Piggy Bank.

In the end, only one winner could be crowned, and the honors went to Chef Seungjoon Choi and his dedicated team at Hortus, who are now competing in the final competition.

A big round of applause to all of the amazing folks who make Cochon555 so spectacular!

Photos via Cochon555 and by Yvonne Lee