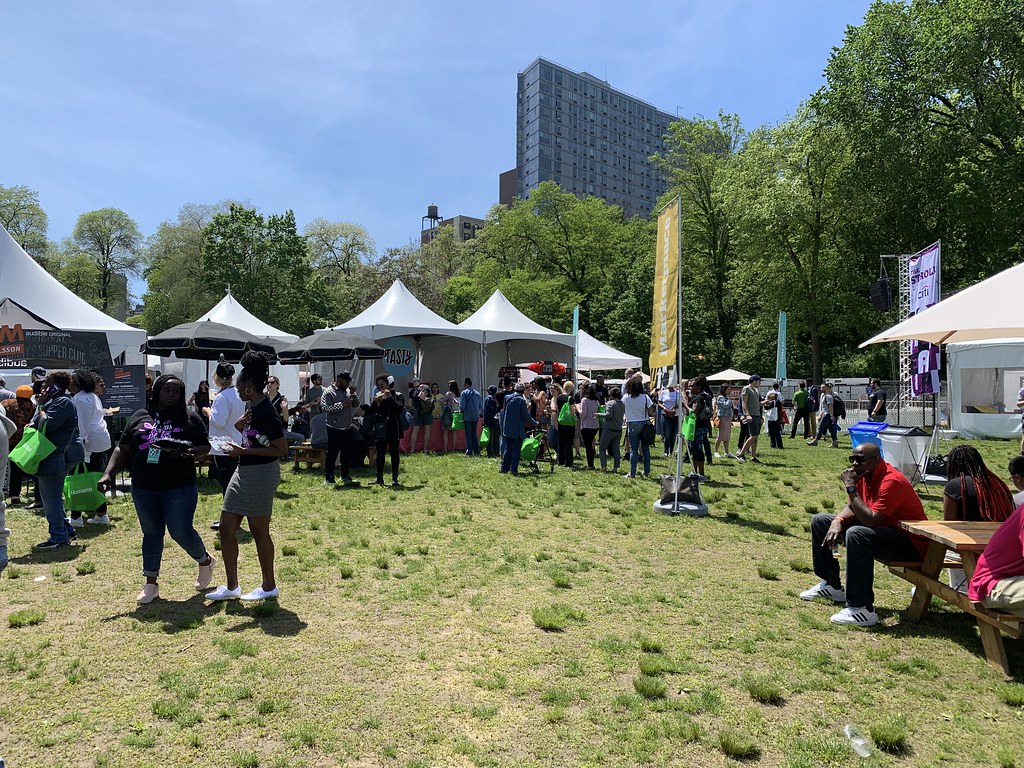 NYC is a city full of diverse neighborhoods, from Inwood to the Bowery and everywhere between. We are all New Yorkers, but most of us are proud of our neighborhoods and when asked identify with them. I’m a Hell’s Kitchen kid and have been there since the late 80s, long before it became the destination spot it is today. I’ve lived in a few different areas in NYC and Brooklyn, but to me home will always be HK. I’ve spent a fair amount of time uptown in Harlem though. I’ve been to the Apollo Theater too many times to count. Who remembers St. Nick’s Jazz Pub? When it closed in 2011 a true part of New York was lost, but it will never be forgotten. 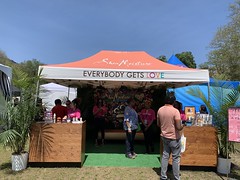 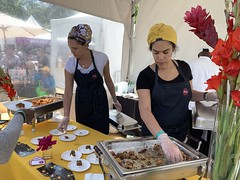 This year my girlfriend and I went for the first time to check out the Harlem EatUp’s Grand Tasting Event. This year the event was  hosted by the well known television and radio personality, Harlem’s very own Bevy Smith. The 5th year of the festival, it was once again held at Morningside Park over near 112th Street and Manhattan Avenue. It was one hell of a party! 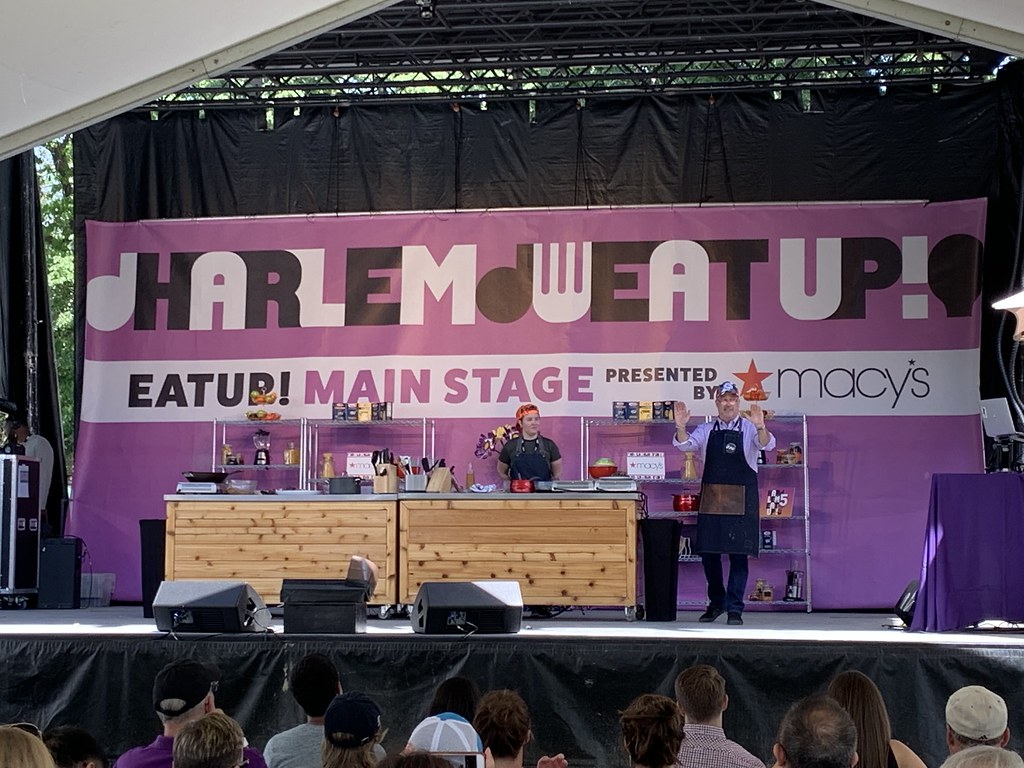 There are a couple ways to visit the Harlem EatUp. The Marketplace is free to explore, a section where Harlem artisans sell their food and wares. There is also a great beer and wine garden (for those 21 and older), free giveaways, and games and activities for kids, plus the EatUp! Main Stage presented by Macy’s for culinary demonstrations, live music and a DJ-all-day dance party! 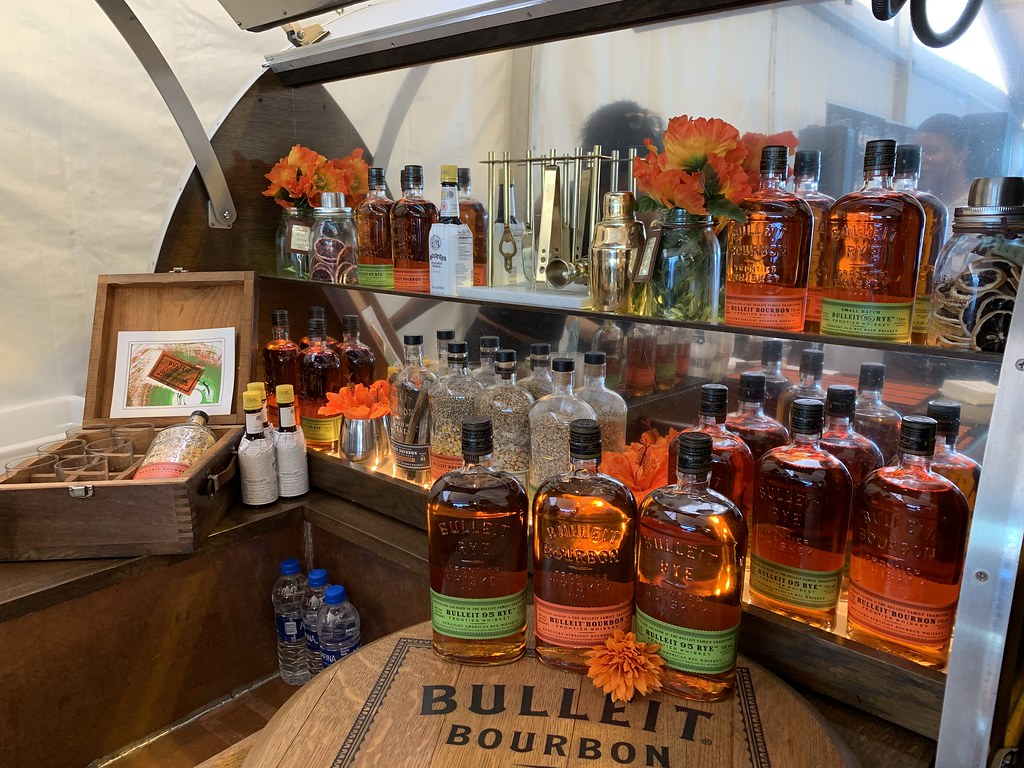 There’s also The Ultimate Grand Tasting for the admission price of $85 per person, where you can try signature bites from over 20 of Harlem’s best restaurants, plus samples of various wine, beer, and spirits, all along with live music and DJ to boot! 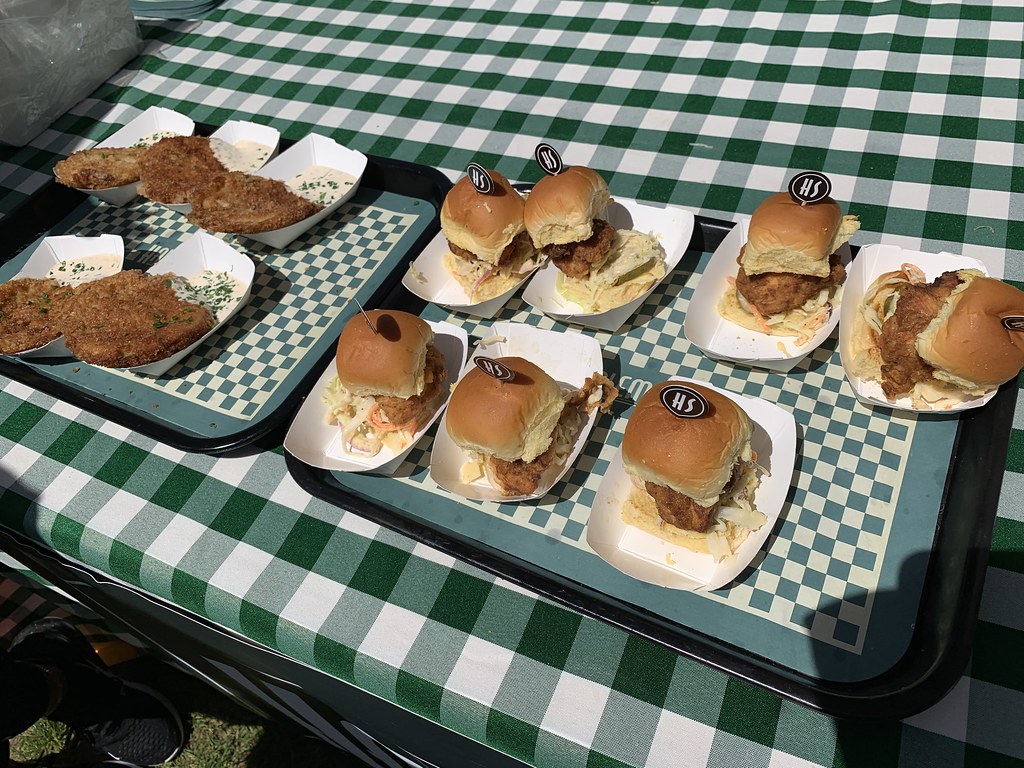 Being over 21 (just barely) and always hungry, we decided to try the The Ultimate Grand Tasting. It was well worth the admission price. If you are regular readers of Socially Superlative, you might have read my recent review of Harlem Shake. They were the first place we hit up for food at the festival, and rightly so, as their burgers are among the best in NYC. 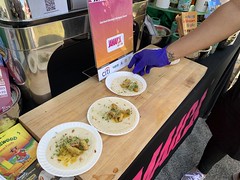 LoLo’s Seafood Shack was the next place we took our hungry stomachs to. I have never been to LoLo’s before, but I’ll definitely be going now once I sampled their stuff. Next up was The Greedy Pot with Caribbean and Southern infused food that’s the creation of Harlem native owners Sereena and Kevin Morrison. Wow – just wow. You gotta try it folks! 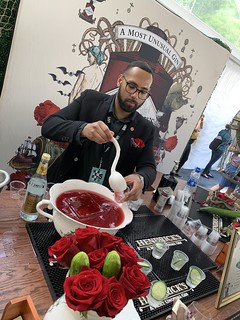 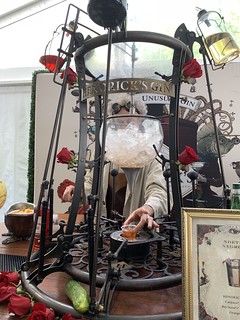 Sufficiently fed we made our way to the real party, the 21+ tent where alcohol was flowing faster than the Hudson. There were enough inebriants to get a small army smashed. Whatever your poison may be, it was available to try at the tent. Did I mention that there was a DJ spinning some cool jams too? Needless to say my girlfriend and I spent some quality time getting our drink on and enjoying the funky tunes. 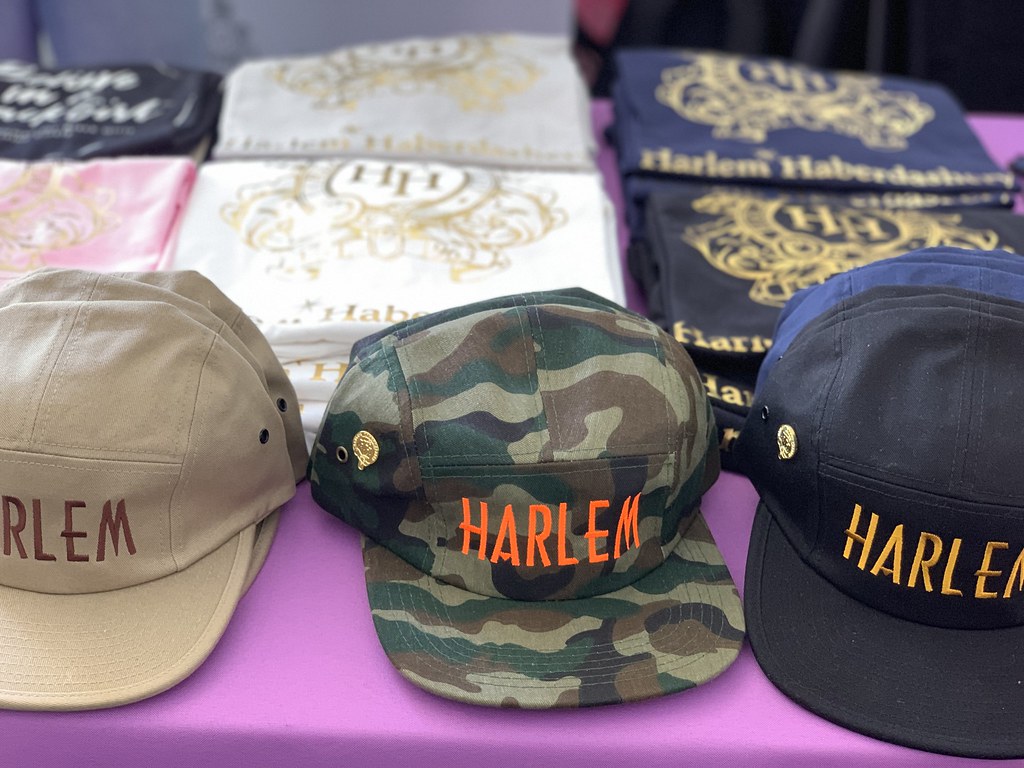 We bought caps from the trendy Harlem Haberdashery, a cool new uptown boutique to check out next time you are up in Harlem. They are a custom-made apparel company creating looks for celebrities, recording artists and sports stars. 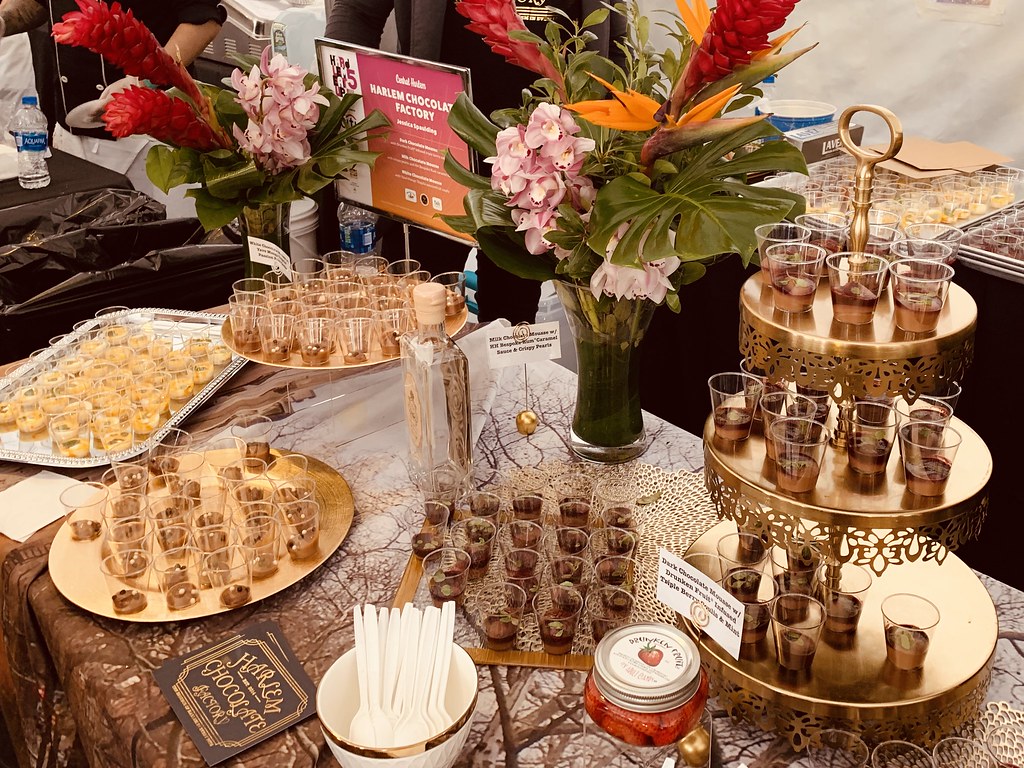 Stumbling out of the tent, we finished off the afternoon with some sweets from Jessica at the Harlem Chocolate Factory and ended with Rugelach By a Brother, Harlem’s own Alvin Lee Smalls. His bakery has received numerous awards from the New York State Senate, Harlem Business Associations, and Citywide Churches. Lee Lee’s Rugelach is a vendor with Whole Foods Market and has been featured on NPR, CBS, NBC, ABC and Fox. Celebrating 55 years of baking and 30 years as a businessman in New York City, Alvin says, “Love in the hand is my secret ingredient and my heart & soul go into each piece I create. Listen, if you’re going to eat sweet, eat good sweet. LEE LEE’S IS GOOD SWEET”. 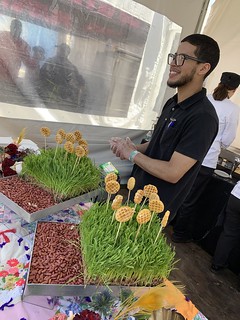 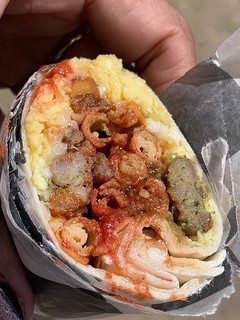 What more can I say? Next year don’t miss the boat as the Harlem EatUp’s Grand Tasting Event is where the party’s at! 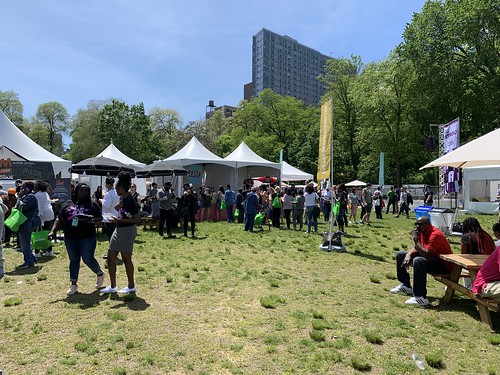