Casita Maria Fiesta at The Plaza 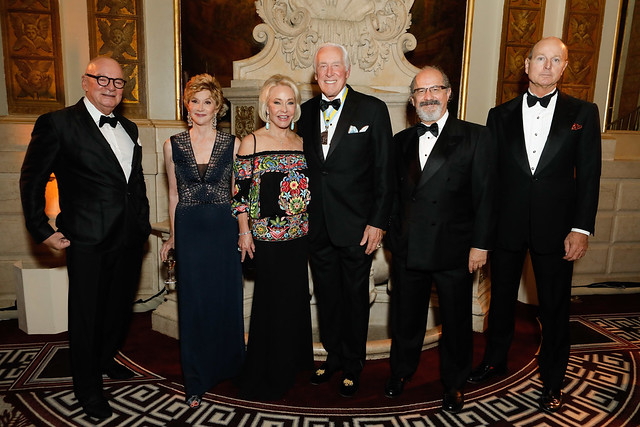 The Casita Maria Center for Arts and Education, located in the South Bronx at 928 Simpson Street, was the first charitable organization to serve Latino youth in New York City. Since 1930 Casita Maria has provided a welcoming community which enriches and edifies Latino, Hispanic, and minority youth. 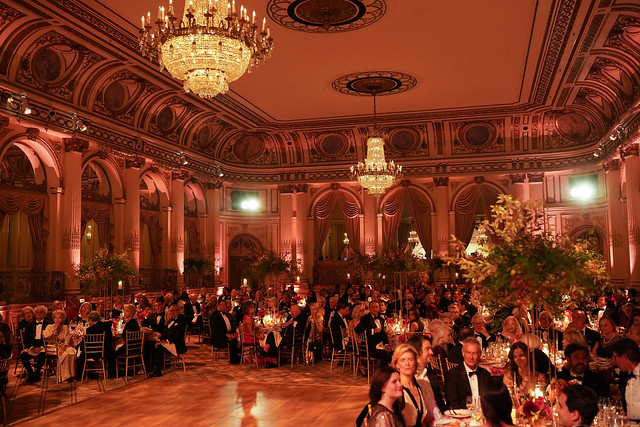 Shared cultural, art, and educational programs steer participants toward successful social outcomes. Students enrolled in grades “K” through twelve use art to model leadership roles. Program participants are encouraged to improve their self-expression. More than 1,000 students per day come to Casita Maria to develop their talents and establish a love of the arts. 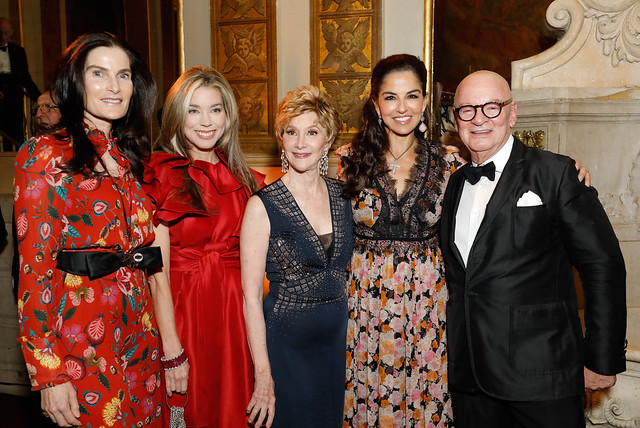 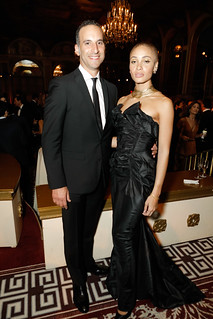 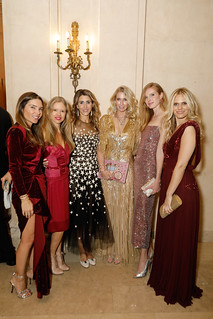 The reception, held in the Plaza’s Terrace Room, provided an opportunity for me to experience an unfamiliar portion of the hotel. The room’s two levels of recessed areas are surrounded by open round topped arches on one side and their mirrored counterparts on the other side. Three ornate chandeliers attached to an illustrated ceiling shine down upon a thick cream colored carpet adorned with red leaves. 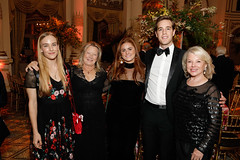 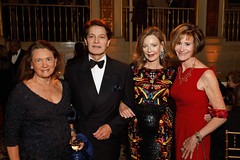 During the cocktail reception I enjoyed the hors d’oeuvres, which included mini chicken tacos served on lime and lemon wedges, vegetable wraps, mini hamburgers, pigs in blankets, and a delicious chicken satay.

Knowing that royalty was in attendance, I was hell bent upon closely encountering my first royal personage. With sights set upon meeting HRH Prince Dimitri of Yugoslavia, I asked the event planner to point him out to me. This is how the planner responded after I asked if it was permissible for me to just go up to the prince: “Go for it.” 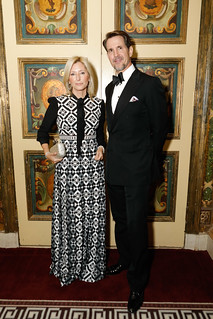 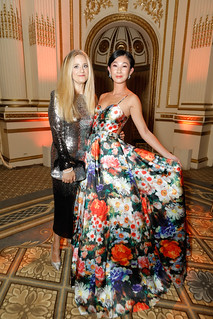 I had this conversation with Prince Dimitri:

Commoner Me: “Hi. I‘m here as a reporter. I have never spoken to a prince before. I thought that meeting royalty would provide a good angle for what I am writing about this event.”

Feeling out of my depth because the only King of Denmark I know from is a Hamlet protagonist, I decided to end the  conversation.

CM: “It was nice to meet you. Thank you–your majesty.”

P: “You are most welcome. If you would like to meet my cousin, he is the tall man standing over there.” 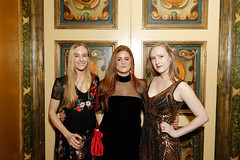 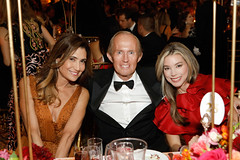 Scouts honor, this was the conversation verbatim. The king was located two Terrace Room recesses down from me surrounded by a bevy of gowned and tuxedoed drink sippers. Deciding that meeting one royal person was enough for one night, I thought it best not to tackle the throngs to
speak with another one.

As I entered the elevator to leave the event, I felt grateful that George Washington decided against being a king. 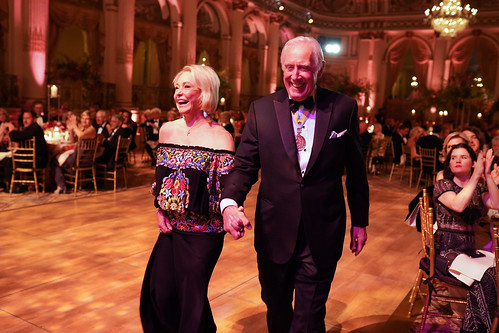 Ambassador Mary Ourisman Dawkins served as U.S. Ambassador to Barbados and the Eastern Caribbean, a total of seven countries simultaneously. She is a longtime supporter of the arts, along with community involvement, as well as a supporter of the R.N.C. and the Republican Governors’ Association. She was appointed by President George W. Bush as a Trustee of the Kennedy Center, and is a founding member and co-chair of the International Committee of the Arts. She has served on numerous arts boards including the Washington National Opera, American Ballet Theater, and the Smithsonian Institution. All this in addition to her work on behalf of The American Red Cross as past Chair of the Red Cross, and the Prince of Wales Foundation, Friends of the Uffizi, and many others. She continues her philanthropic and artistic interests in Palm Beach where she spends the winter, as a member of the Preservation Society, Four Arts, and the Palm Beach Civic Association.

Pete Dawkins is a senior advisor to Virtu Financial. At West Point, he was President of the Class of 1959, Captain of Army’s undefeated football team. An all-American halfback, he won the Heisman Trophy and was selected as a Rhodes Scholar. Pete remains active in a variety of national, financial, community and philanthropic roles, serving on the board of the Wharton Business School’s Center for Leadership and Change Management and the Intrepid Museum. Time magazine identified Pete as one of the “Top 50 Leaders in the U.S.” 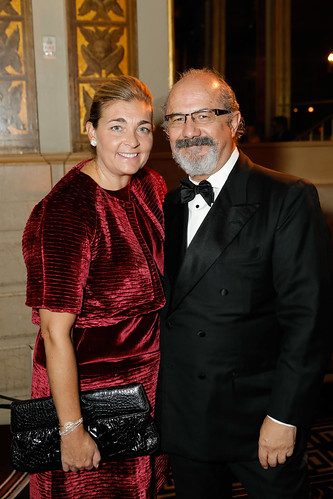 Edgar Legaspi is a Partner and Head of Coverage for Mexico, Latin America and Spain at BDT & Company. He also serves on the Investment Committee for BDT Capital Partners. Edgar has more than 25 years of investment banking and principal investments experience. Prior to joining BDT, Edgar ran Morgan Stanley’s Principal Investments Latin American group. Prior to joining Morgan Stanley, Edgar was a Managing Director at Credit Suisse and CEO of Credit Suisse First Boston, Mexico. Edgar also was a General Partner and Managing Director at Lazard Frères & Co. Edgar is a director of Casa Dragones.Edgar is a trustee of the Gabriela Legaspi Foundation and the Alianza Medica Foundation. Edgar received an MsC from Northwestern University and an MBA from the Wharton School at the University Of Pennsylvania. 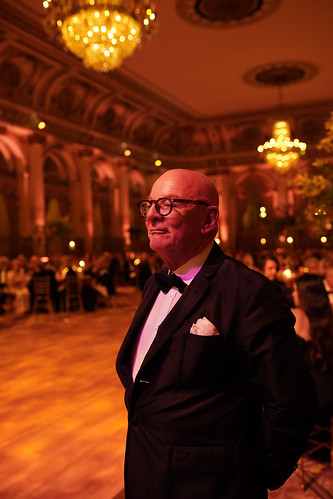 Juan Montoya is one of the most acclaimed and prolific interior designers in the world today. Juan Montoya was born and spent his early years in Colombia. After studying architecture in Bogotá, he moved to New York where he graduated from Parsons School of Design. Following two years of work and study in Paris and Milan, he returned to New York, where he founded the design business he has presided over since. His firm specializes in residential and contract interior design, with projects located throughout the United States and Internationally. A member of the Interior Design Hall of Fame, a recipient of an honorary Doctorate of Fine Arts from Parsons School of Design, A Doctorate from New York School of Interior Design, Star of Design Award, and the Legends Award from Pratt Institute. His contributions to the field of interior design are widely recognized. He is also included in AD100 since its inaugural list, AD Collector (France) top 100, AD 30 Deans of Design and a Grand Master on Elle Decor’s A-list.

A truly original thinker, Juan Montoya is not wedded to a particular style or period. Initially labeled a minimalist, his work has evolved dramatically since he first came to the public’s attention. The great diversity found in Juan Montoya’s work notwithstanding, it is possible to trace elements that constitute the Montoya look in all his interiors. The exquisite juxtaposition of textures, colors and volumes, together with thoughtful attention to shadows, scale and spatial quality, result in interiors that exude refinement and elegant simplicity. Through the careful placement of objects, that often reflect his interest in a variety of cultures, Montoya enhances the qualities of a room or of an entire apartment or house. 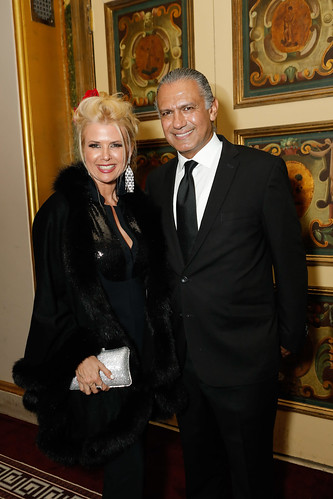 Sissi Fleitas is a prominent model, presenter and actress best known for her work on “Sabado Gigante.” She has has appeared in the telenovela “Los Secretos de Lucia” and various films across Latin America.

Inspired by Bali and its time-honored jewelry-making traditions, John Hardy’s artisan collective was founded in 1975 with a dedication to handcrafted jewelry. John Hardy Jewelry is committed to sustainable luxury business practices, their craftspeople and the preservation of Bali. They pride themselves on the value of authenticity; it is the soul of community that makes each piece truly one of a kind.

Casita Maria, the oldest Latin charity in New York City, provides high-quality, innovative arts programming to over 1,000 students daily both during and after school, producing participatory, well-rounded individuals who go on to fulfill their dreams. Located in the country’s poorest zip code, the South Bronx, Casita Maria Center for Arts & Education creates a safe and welcoming community, enriching and uplifting youth and families towards success, through shared cultural, art and educational experiences and programs.

Photos by PMC/Gonzalo Marroquin via Jonathan Marder and Company