This spring, The Leopard at des Artistes will once again proudly participate in this premier Upper West Side food & wine event. Celebrating a decade of divine dining, Best of the West Presented by Park West Village reaches to the stars as the haute highlight of a weekend homage to the Upper West Side’s most illustrious chefs and restaurants and hosted by Jesse Palmer, renowned Analyst/Host: DISNEY’s ESPN and ABC Networks featured on College Football and Good Morning America. It’s an extraordinary night of epicurean excellence against an urbane backdrop of high spirits and sophisticated sounds from DJ Price.

The evening’s hosts will be joined by honorees April Bloomfield and Ken Friedman, along with such other award-winning chefs as Jean-Georges Vongerichten, Daniel Boulud, Vito Gnazzo and John Fraser.  The Leopard at des Artistes will  be among the 40 bastions of fine cuisine participating in these 10th Anniversary festivities, including Jean-Georges, Boulud Sud, Dovetail, and Jacques Torres Chocolate. For culinary connoisseurs, it is the ultimate dream-come-true event under a grand tent with cuisine, fine wines and spirits, and so much more!  The Leopard at des Artistes’ Executive Chef Vito Gnazzo will serve his “Organic Farro salad with grilled vegetables and smoked mozzarella bites”!

Proceeds from the weekend of events benefit the Columbus Avenue Business Improvement District, which uses the proceeds for neighborhood beautification and betterment projects.

For more information on participating restaurants,
and photos from last year, visit www.tasteuws.com 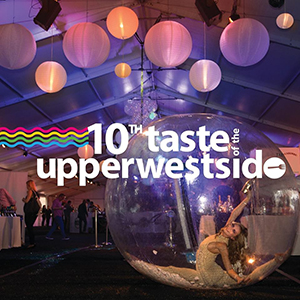 [sharing tagline="Share this event!" title="10th Annual Taste of the Upper West Side: The Best of the West" link="https://www.sociallysuperlative.com/events/10th-annual-taste-of-the-upper-west-side-the-best-of-the-west/" description="" backgroundcolor=""][/sharing]