Drew, who has been court-confined for observation at a psychiatry facility, calls his older brother Terry, to corroborate his claim of childhood sexual abuse, releasing barely-hidden animosities between the two. In a Dark Dark House tells a tale of sexual and emotional abuse and two estranged brothers who attempt to overcome it and understand the legacy of abuse, both inside and outside their family home. 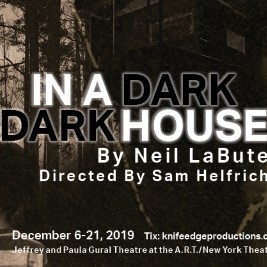