Parkinson’s is a chronic, degenerative, neurological disorder affecting over 1 million people in the country. 60,000 new cases (one person every nine minutes) are diagnosed each year. Disease management is important and at the Unity Walk, participants have the opportunity to visit the booths of Parkinson’s organizations, healthcare experts, and movement disorders centers. Participants can watch exercise demonstrations and visit the booths of sponsors to learn about current medical therapies. For more information, visit http://www.unitywalk.org 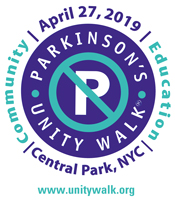